From Bedrooms To Billions 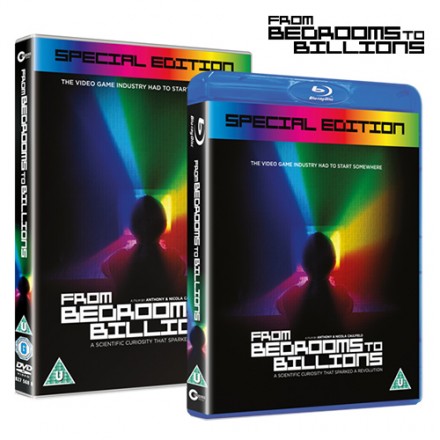 Classic gamers with a sense for history will appreciate this insightful documentary which traces the tumultuous evolution of the British video game industry from the advent of the home computer to the present day juggernaut. From Bedrooms to Billions covers a lot of ground in its two hour running time, presenting the testimony of hundreds of developers, publishers, and other key players who lived through the historic early years.

The documentary is nicely paced and never lingers on a particular person or topic for too long. Programmers explain how they employed tricks to circumvent hardware limitations. Businessmen talk about the ups and downs associated with running a modest computer game store in those early days. Journalists talk about the challenge of spreading the word about games in the pre-Internet era. There's a ton of old footage, vintage photographs, and magazine clippings that take you back to an era when there was a palpable excitement over this new form of entertainment.

The title refers to the early pioneers who programmed games from their bedrooms purely as a hobby. These creative individuals were able to squeeze amazing results out of some remarkably primitive hardware. I can personally relate to these days, having spent endless hours programming in BASIC and typing in endless magazine listings (as my sister read them out loud). Instead of an Atari computer though, the systems favored in the UK were the Spectrum and BBC Micro. Once Commodore arrived however, the hardware used by enthusiasts in both countries began to converge.

In the early years of the 80's enterprising young individuals would sell their own games via mail order by advertising in magazines. As computer games grew in popularity, distribution systems were put into place and video game journalism was born. As the decade came to a close, a painful shift from home computers (read: cheap disks) to consoles (read: expensive cartridges) put a lot of the smaller publishing houses out of business. A few of the more well-known UK developers that survived included Rare (Donkey Kong Country) and Eidos (Tomb Raider).

As single developers gave way to huge specialized teams, a great deal of creative freedom was lost. With so much money is on the line publishers became risk-averse, leaving marketers to decide which types of games got the green light. The closing minutes of the documentary give hope that the advent of mobile games and digital distribution might put the power back into the hands of the people with genuine passion for video games.

From Bedrooms to Billions boasts some impressive production values with sharp graphics and dynamic sound. I enjoyed watching old games in action which are presented razor sharp and pixel perfect. The soundtrack incorporates plenty of upbreat but appropriate music including the band New Order. From Bedrooms to Billions is fascinating viewing for any classic gamer or computer enthusiast, particularly those who live in the UK. It makes for one very entertaining history lesson.

Buy From Bedrooms to Billions from Funstock.co.uk.
Copyright 1999-2022 The Video Game Critic.  The reviews presented on this site are intellectual property and are copyrighted. Any reproduction without the expressed written consent of the author is strictly prohibited. Anyone reproducing the site's copyrighted material improperly can be prosecuted in a court of law. Please report any instances of infringement to the site administrator.