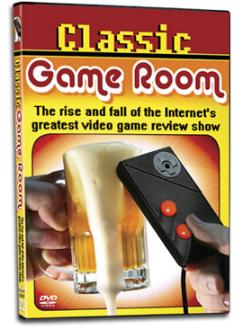 Subtitled "the rise and fall of the Internet's greatest video game review show", this tongue-in-cheek DVD chronicles the rollercoaster ride of a short-lived online program during the days of the Internet boom and subsequent bust. "Classic Game Room" ran from October 1999 to November 2000, featuring two irreverent hosts (Mark Bussler and David Crosson) who spiced up their game reviews with wisecracks, profanity, alcohol references, and goofy parodies. The cable channel G4 once employed a similar formula, but Classic Game Room has a charming low-budget (read: no budget) quality, and these guys deserve props for reviewing classic games at a time when those games weren't getting much respect.

The Video Game Critic was just coming up to speed in 1999, so I can forgive these gentlemen for claiming they were the first to review the Atari 2600 game Frogger online. Actually, very few people could watch Classic Game Room back in 1999 because most Internet access was limited to slow dial-up modems. This DVD features a 110-minute retrospective that seamlessly incorporates about a dozen of the original ten-minute episodes. The shows are mildly entertaining but you really need a passion for classic gaming to stick it out until the end.

The reviews themselves are fair and objective, covering old favorites like X-Men (Genesis), Yars' Revenge (Atari 2600), Seaman (Dreamcast), and Joust (Playstation). Unlike the original pixelated broadcasts, the shows look sharp on DVD and the game screens are remarkably clear. Mark and Dave are knowledgeable of consoles ranging from the Atari 2600 to the Dreamcast, treating them all with equal respect.

Unfortunately, these guys aren't very articulate and their acting is horrible. Much of the humor is predictable and they tend to go off on boring tangents. Still, there are flashes of brilliance. When they run around a playground exhibiting their unique "X-Men mutant powers" or torment Seaman on the Dreamcast, you really have to laugh. And while you might expect these profanity-spewing, beer-guzzling guys to be irritating, they're actually quite likeable and exhibit a self-deprecating sense of humor.

The shows are edited to great comedic effect, making good use of inappropriate music and goofy graphics. You'll see many squirrel heads superimposed over the bodies of people, and frankly I'd say that's worth the price of admission. Also included is a 2007 documentary that's actually more entertaining than the shows themselves, employing a hodgepodge of disjointed stock footage and bizarre music to give the show a "larger than life" feel.

Some might dismiss Classic Game Room as two guys just goofing off in front of the camera, and that's not an unfair characterization. But for those who appreciate classic games, beer, and low-brow humor, this DVD is a celebration of the best things in life.

Find out more at The Classic Game Room Web Site.
Copyright 1999-2022 The Video Game Critic.  The reviews presented on this site are intellectual property and are copyrighted. Any reproduction without the expressed written consent of the author is strictly prohibited. Anyone reproducing the site's copyrighted material improperly can be prosecuted in a court of law. Please report any instances of infringement to the site administrator.