Is anyone else ever nostalgic for bad graphics?

LoganRuckman wrote:This is the perfect thread to post the new Tesla Cybertruck. I love the aesthetic of it, and it really does look like '90s 3D graphics.

LoganRuckman wrote:This is the perfect thread to post the new Tesla Cybertruck. I love the aesthetic of it, and it really does look like '90s 3D graphics.

He was the one throwing metal balls at the windows. Moron.

Personally, I always felt there was a certain charm with PS1-era graphics. For lack of a better explanation, I guess you could say it is to 3D consoles what the Atari 2600 is to 2D consoles; primitive by today’s standards, but still has a certain feel to it that I find admirable.

[quote="Stalvern"]Although I grew up with one, I have no nostalgia for the N64's choppy, smeary murk. But I do have a soft spot for the 3D graphics in early-'90s PC games, so far ahead of the fourth-generation consoles and so quickly overtaken by the fifth generation. They may be rudimentary by today's standards, but they're clean as a whistle; there's an elegance to them that's somehow timeless, despite how obviously dated they are overall. What are all these games anyway? I’m hoping to get a retro gaming PC someday, so I would like to know.
Top

astrodomekid wrote:What are all these games anyway? I’m hoping to get a retro gaming PC someday, so I would like to know.

This explains so much. I played Soul Calibur at a laundromat about five or ten years ago, and remember thinking to myself, "Man, this looks a lot worse than I remember it." Played it on the Dreamcast a few years after that, and thought to myself, "Man, this looks a lot better than I remember it." Playing it the other night, I found myself feeling roughly the same way - the Dreamcast version really, really holds up. The little things, like the fact that the characters blink and actually move their mouths in time when they speak, were such a big deal at the time. I feel like there's modern fighting games on the market today that still can't get those details right! 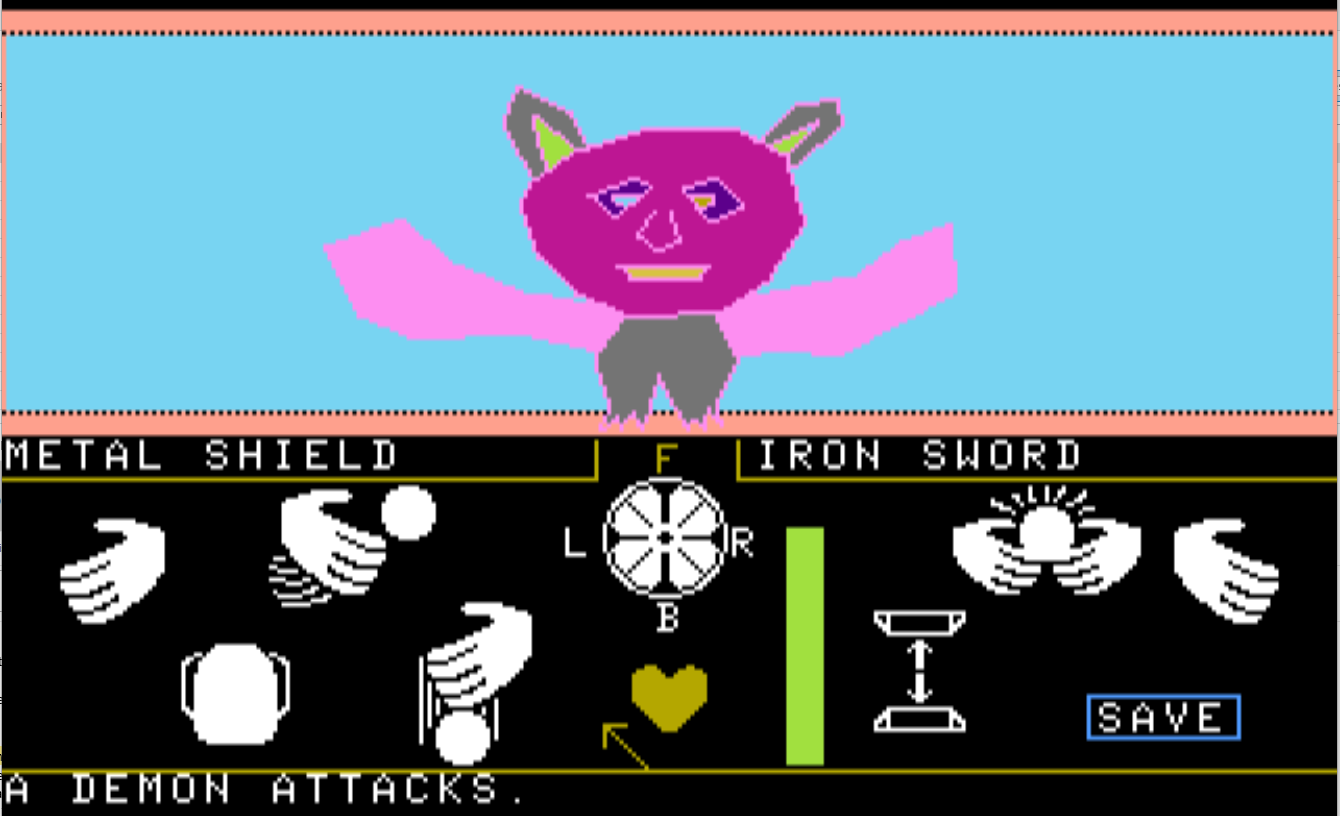 But how would I even begin to justify my love for something like Castle of Tharoggad? Technically, this is the victim of a very primitive color vector engine, but in every other way it's a cautionary tale about why art majors shouldn't be taken for granted.

As someone who's spent a few years in art school, I couldn't agree more with the above statement. You just made my day, sir

Dat screenshot, tho. So that's where the goalposts are, eh? Good to know! Let me see what else I can come up with. Time to jog the ol' memory a bit more...
Top

Yea from me; I love going back and playing games with obvious limitations and simplicity compared to today's games. I honestly enjoy playing and watching Virtua Racing and Jumping Flash, and it's always interesting how they got Game Boy games to work with the limitations of the hardware.

And then there is the NGPC and it's awesomely blocky graphics...

Funny how when you're not really looking for this sort of thing, sometimes it just falls in your lap.

I love the 3DO version of Road Rash, specifically the PS1 port, and have been hooked on it for the past few days despite not playing it for years. Easily in my personal top 10, it's hard to believe it's been 25 years since its release in 1994, as the killer soundtrack and fast, smooth gameplay is just timeless, in my eyes.

That being said, while the music, gameplay, and memories of playing the game always come to mind when I think of it, it seems that for most people that remember the game, the first thing they think of is the wonky art style of the background menu graphics. 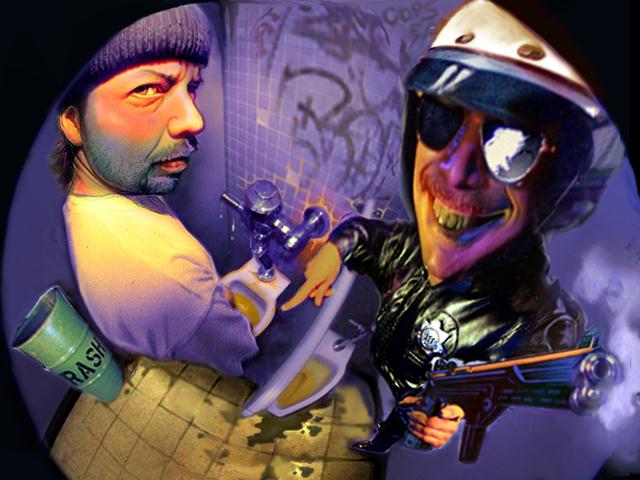 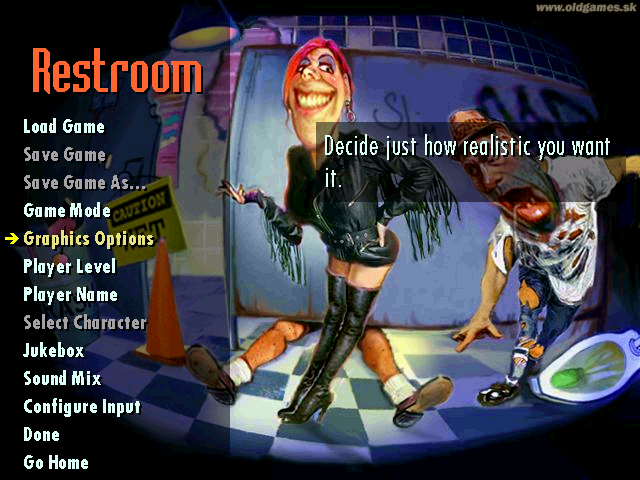 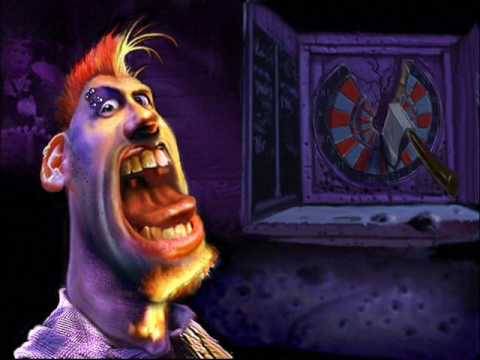 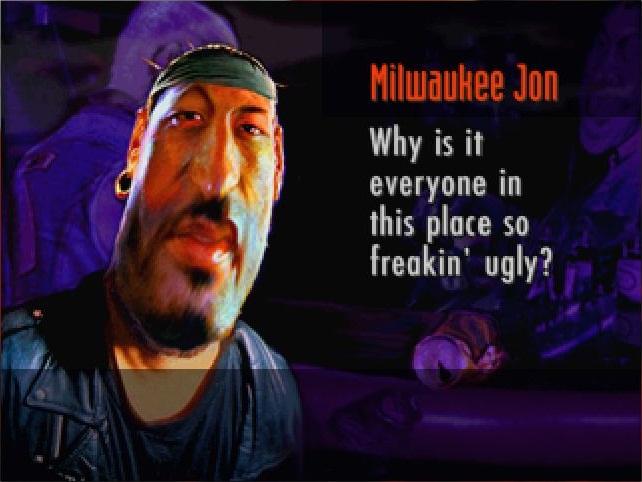 To me, that art style just goes hand-in-hand with the 90s counterculture vibe the game was trying so, so hard to pull off. It feels like something you'd see on Liquid Television or during MTV commercial breaks, or even in an episode of Ren & Stimpy. Much like I said in my initial post, this version of Road Rash is one of those games that is very much a product of its time.

I love the game dearly, but most of the time I bring it up, all I hear is something along the lines of, "Yeah, good game... but what's up with that guy's teeth??" Even my wife has gone so far as to say she can't stand watching me play the game, and when I have it up and running, she's busy making sure her eyes are anywhere else but on the screen.

I've often wondered who the artist was for the game, and what other works they've put together over the years. Divisive as the style may have been, the artist seems to me to be a bit too talented at that sort of thing to have just been a run-of-the-mill EA employee. I'm sure the info is out there, but I have no idea where to start looking. Help me out, Internet!!
Top

This is an interesting question, here are a few random things that to come to mind:

I can imagine someone back in the day 'upgrading' from an Atari 2600, Fairchild, or even a dedicated pong machine to an intellivision or even a ColecoVision and being 'nostalgic' about their old console having worse graphics but better gameplay than their new one. Frogs and Flies is a good example. It was a first party game for the intellivision but the Atari 2600 version looks worse but is more fun. Developers back then sometimes sacrificed smooth and quick gameplay to make the graphics look nicer. There was not any precedent at that time: Do players want better graphics or better gameplay? The choice is obvious now but not back then.

Between the 16 bit and 32 bit era true 3d games became possible. This was a very significant time in gaming history and a big adjustment for developers and gamers. Since 3D was the latest thing, 2D gaming took a back seat. That would be VERY nostalgic for 16 bit 2d graphics. Those games were beautiful, but the new ones were jagged and rough but still supposedly better.

On the other hand, these days I find that some early 3d games on Playstation and Saturn actually have a beauty and charm all their own not unlike the 16 bit era. Games like Sega Rally Championship, Panzer Dragoon, Wipeout 3, and chrono cross play great and the graphics have a 'retro' appeal for me. We won't see anything that looks like that ever again unless it is from an indie developer. I wonder if you could use the unreal engine?

It is close, but some Wii-U games don't look quite as good as their switch counterparts. However, the Wii-U versions are MUCH CHEAPER. Getting Mario Kart for $15 instead of $50 and having it sill look great is very nostalgic LOL. That is why I got a used Wii-U even though the Switch had been released by that point.
Top
Post Reply
36 posts