Tell us about games you are currently playing. "Quick hit" reviews.
Post Reply
10 posts • Page 1 of 1

(Note: I started writing this with the intention of it lastingonly a paragraph or two, but I just kept typing! Excusethe length of it.)Although this game has already been out on PC since late last year,it was just released on PS3 and Vita through Playstation Network this Tuesday for $10. You get both the PS3 and Vita version for for that price, which is a nice bonus.The best endorsement I can give you for the game is that I installedit on Wednesday afternoon and finished it late Thursday night, withonly food, sleep and my daily responsibilities getting in the way.The story: you are a hitman who may very well be losing his mind. You have repeated encounters with a trio of men in three-piece suits wearinganimal masks who ask you enigmatic questions and insult you. You receiveyour orders on your answering machine in coded messages. It becomes increasing hard to tell what's real and what is only in your head. You can become immersed in the gameplay without worrying too much about the story, but it adds an interesting backdrop and gives your actions context.The gameplay is a hybrid of stealth games and high-speed arcade actiongames, with an overhead view similar to the NES Metal Gear games.The game also reminded me a lot of Super Meat Boy: short levels;one hit from anything kills you; instant respawning; and trial & errorbased gameplay where you experiment and alter your approach everso slightly, making it a bit further each time until you conquer the level.You start each level armed with only your fists. Various types of meleeweapons and guns can be taken from enemies or found lying about. Both melee weapons and guns can also be thrown at enemies,and if you open a door when an enemy is standing near it, you willknock them to the floor; neither of these attacks will kill an enemy,and (much like in Resident Evil) they must be finished off before they can get back up. As you beat each level you unlock new types of weaponsand you gain animal masks. Each mask (from which you choose at thebeginning of each new level) gives a different ability: more speed,deadly punches, invincibility to one bullet, etc.The game is graphically unimpressive on a technical level (there are probablyNES games that look better), but the visual style (pastel colors from the 1980s,woozy effects, grotesque faces and animal heads) adds a lot of atmosphere to the game. The soundtrack is awesome, a series of techno tracks that pullfrom both 80s new-wave and more modern club sounds that combine with the repetitive die/try again/die style gameplay to put you into an almosttrance-like state. This is a difficult game. You will die...a lot. Death actually feels meaningfulbecause of the fast and sudden nature of it; since everything is a one hitkill, you can't just brute-force your way through a section and then heal,or crouch behind a barrel until the redness on the edge of the screen goesaway. The game is surprisingly brutal, too. Although the graphics are on an 8-bit level, the violence is comparable to something like Manhunt. Thegame goes out of its way to rub your face in it too; after you finish a level,you are forced to walk back through the previous floors, where all the bodies and blood are still where you 'left' them. Whether the game has an anti-violencemessage or whether it simply wants you to acknowledge what a psychopathyour character is is somewhat unclear, although I'd go with the latter.After you finish the game, you can replay any of the level for high scores, whichunlock new weapons and new animal masks. This game has a lot of potentialfor replay, the way that something like The Mercenaries mini-game does.The game definitely has the breathless, one-more-go feel that a great arcadegame does.There are a few problems. There are a few boss fights, and tend to slow the game down and remove the open-ended, try-anything approach that makes therest of the game so much fun. There is one level that forces you to only usestealth, and it is a bit of a grind. There are a few technical issues: there willbe a few times where you swear that you hit your enemy and nothing happens;also, enemy AI can be inconsistent, stupid one moment and a bit too smart the next. The controls took some getting used to, as well, especially the fact that thegame uses all the triggers and bumpers but only one face button.Overall, I highly recommend this game. Feels like a A- to B+ to me.
Top

This is my next Vita game after beating Portable Ops after recommendations from Rev, Game Sack and the positive write up from Velcrozombie below.

First impressions ? Holy hell this is hard !
Like the atmosphere and the graphics have an early ST game kind of feel. Definitely has a one more go vibe.

My jaw dropped when I was killed almost immediately on the first level. Looking forward to sinking my teeth into this one.
Top

Yeah, this is definitely a game that has a semi-difficult nature however if you aren't going for A+ ranks on each stage it isn't too bad. You really just need to throw yourself at the levels little by little until you figure out the best ways to beat the stages.

Helpful stuff I figured out as I played more and more levels:
-Use the look button to get a decent gauge of where everyone is it. If you want to target a particular person selecting them with the cursor helps.
-Throwing your physical weapons at enemies can be very helpful especially if no guns are around.
-Abuse the silent nature of physical weapons when possible. Good for killing people without others running after you.
-Doors are a lifesaver while are also incredibly annoying since they block shots and knock people down. If you don't have any weapons try abusing the door.
-Don't forget to check for enemies who have fallen down to make sure they are dead. If they move even a little do your finishing move on them so they don't get back up.

Anyway, hope you enjoy the game. I thought it was a good time.
Top

I downloaded this one a few months ago on the PS4.. It was on sale for $4 and I saw the positive reviews online, so I figured I'd give it a shot. Haven't played it yet, but this post here is making me more interested in it. Maybe soon. There is a sequel too, but the reviews make it sound like the first game is better.
Top

^ Following up on my post here, I tried this game several months ago, but it was very confusing to get started. So I only played a couple levels and temporarily moved on to another game. Well, I've finally gotten back to it, and played enough to get the hang of it - and man, this game is good. Really good. It's very challenging, but the trial-and-error to learn a level and finally beat it is all part of the fun.

On its face, it looks like a standard overhead third-person shooter with '90s PC graphics. But the game goes a lot deeper than that. It is part shooter, but it's almost more of a puzzle game. That's because each level puts you inside a building, where you must clear all the enemies without taking damage, and you'll methodically combine stealth, firepower, and strategy to decide the best way to clear each part, while inevitably dying dozens of times before you figure it out. On top of that, the game gets huge bonus points for style--as its psychedelic soundtrack and trippy storyline feels like combining Tempest with Max Payne.

Well worth a look, I'd rate this game at least an A-. It's available on a bunch of systems (PS4, PS3, Vita, and PC) -- and a version was just released on Switch in August of this year. 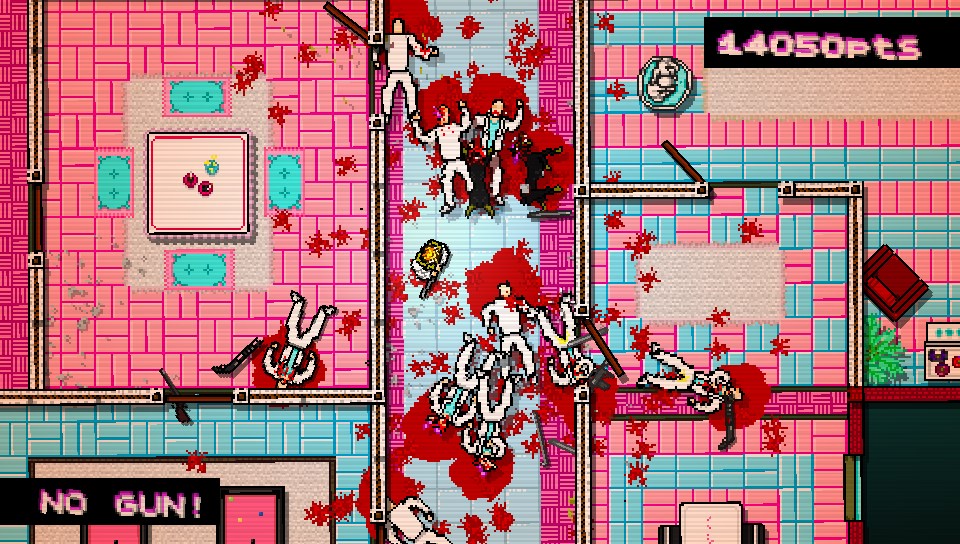 After making the above post, I stuck with Hotline Miami and finished the game last week. Such a great game and highly recommended, especially for old school gamers. I'm gonna stick with my A- score.. I think that's exactly what it would deserve. But I'd have no qualms with someone giving it an A.

Don't be fooled by the screenshot -- this is no just a standard overhead shooter.. there is so much more depth at work here, as you use your brain and strategize to clear each room (with lots of trial and error).

And good news, at least for PS4 owners, the download of Hotline Miami Collection is currently on sale for just $5. The collection includes Hotline Miami 1 & 2. Hotline Miami 1 is generally considered better, but still, both are considered good games. And at $5, you can't beat it. (Hotline Miami on its own is normally $10, and honestly that's a very fair price too if you had to pay that.)
Top

A head's up to anyone with a PS4 - Hotline Miami is currently free to download during the current sale on PSN. The sale ends tomorrow on the 16th so I think you have the rest of today and tomorrow to get it - although I'd get on it ASAP in case I'm wrong. If you were ever curious about the game now's the time to give it a go.
Top

@velcrozombie Are you're sure it's free? I checked, and it's sale for about $3, but not free.
Top

I also checked and saw it was not free, but listed for $2.49. Still, an absolute steal for one of the best indie games I've ever played.

P.S. Ever curious about the going rate for a digital game, and whether they ever go on sale? PSPrices.com is super helpful and covers all modern systems. For example, here's their page and chart for Hotline Miami:

DaHeckIzDat wrote:@velcrozombie Are you're sure it's free? I checked, and it's sale for about $3, but not free.

Sorry. I misunderstood what I was seeing when I saw the game for free while browsing the sale signed in on my PS4. The only explanation that makes sense is that, because I purchased the game on my PS3 previously, I could also download it for free on my PS4 (which is admittedly pretty cool). I should have took the time to look up the sale from a phone or computer where I wasn't logged in to PSN to find out for sure.

Retro STrife wrote:I also checked and saw it was not free, but listed for $2.49. Still, an absolute steal for one of the best indie games I've ever played.

P.S. Ever curious about the going rate for a digital game, and whether they ever go on sale? PSPrices.com is super helpful. For example, here's their page and chart for Hotline Miami:

Thanks for the new resource - I'll definitely use it in the future.
Top
Post Reply
10 posts • Page 1 of 1