Anybody else tried this game out? The cutesy title was a major turn-off and delayed my purchase, but saw it on clearance and picked it up for 15 bucks for the Switch. Don't sleep on this game! It's a hybrid pinball platformer that has had me hooked for the last couple weeks. Seriously one of the top tier Switch titles in my collection. There is a demo available on the nintendo eshop. Give it a spin and you will see how this mail delivering pinball bug will capture your imagination.
Top

What system? Yoshi is my Mariokart and Smash arch-rival, but this sounds fun!
Top

Yes - a true hidden gem that has flown under most gamers’ radars! I actually haven’t played the game yet, but I did buy it for PS4. Like you, the cutesy look and uninspiring name led me to have no interest in it... until I saw the excellent reviews and watched some videos of it.

Yoku’s Island Express is a platform-adventure/pinball game, but it’s actually a Metroidvania game too... a Metroidvania + PINBALL game to be most exact. What a weird genre mash-up, right?... but all the critics say it works very well and is very fun to play. The entire game is one big game of pinball, and pinball is your only way to move around the game world, as you gradually unlock new areas. If you like unique games, check this one out! It’s an indie game, released for download, but there are physical copies too. Should be under $20 now- available on PS4, Xbox One, Switch, and PC.
Top

I finally got around to playing this the past few weeks and I'm glad I did. As said in prior posts, it's basically a combination of Metroid and pinball. Like Metroid, you're exploring around a giant map and gaining new abilities to open new areas. While you can roll your ball around, most of the movement in the game is with pinball flippers. It's a really chill game.. you can never die and it never gets super hard. But it's also not "easy", as some spots will really challenge you with trial-and-error on the pinball shots you need to make. I'm not gonna call this game a classic (it's a B range game to me), but it did hook me all the way through to the ending. A hidden gem for sure. You could probably rush through it in 5-6 hours, while I spent about 10 hours or so to get 100%. Worth a look if you want something on PS4/XONE/Switch that is just casual, simple fun, and very unique.

.
P.S. The theme song on the title screen is one of the catchiest songs I've heard in a video game. I'd just let it play on loop in the background. Check it out. 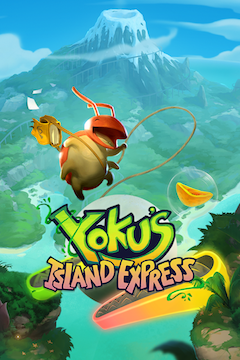