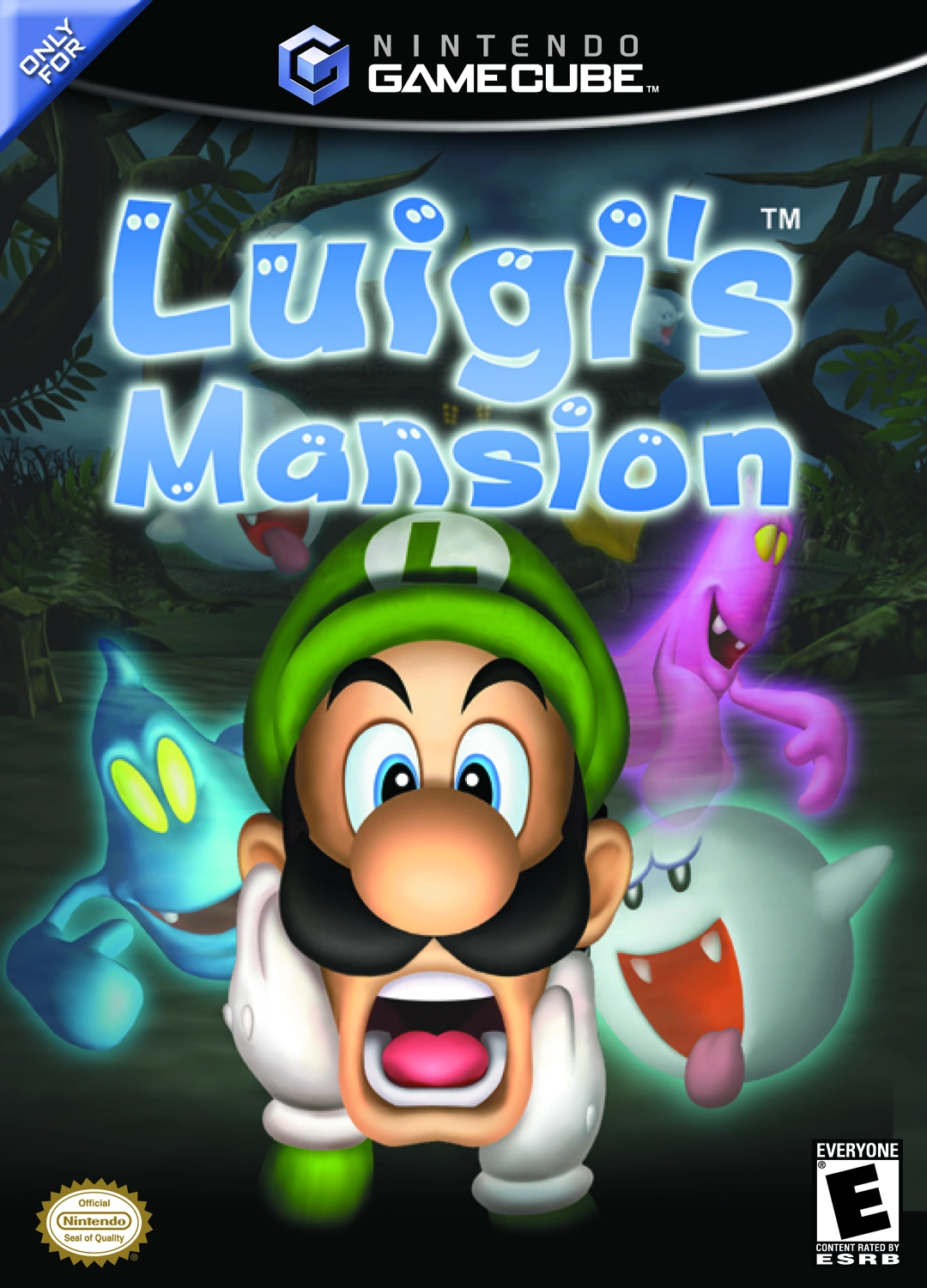 Released as a launch title for the GameCube, Luigi’s Mansion is a prime example of Mario spinoffs exploring unconventional genres - in this case, a humourous and affectionate send-up of survival horror. With expressive animation and interesting gameplay, Luigi’s Mansion has enough charm to entertain over the course of its short campaign.

STORY
Luigi's Mansion is heavier on story than most other Mario spin offs, but the narrative is still pretty light. After Mario mysteriously vanishes, Luigi when’s a mansion in a contest he didn’t even enter. After arriving to check out is the real estate, he soon realizes that the new mansion is rundown, rickety, and worst of all haunted. After running away in terror, he makes friends with Professor E. Gadd, who arms him with the Poltergust 3000, allowing Luigi to rid his mansion of its ghost problem by sucking up the ghosts and turning them into paintings. Oh and, you know, saving his brother.

It ain’t Shakespeare, but it gets the job done.

PRESENTATION
Luigi’s Mansion has a clean, simple presentation. There’s a few graphical flourishes that show off the power of the GameCube, such as the dynamic lighting and some particularly impressive cloth physics.

As is standard procedure for Nintendo, almost every graphical choice is made in service to the gameplay. Characters and interactive objects are bright, while environments are usually dark with muted colours, so that the eye is drawn to approaching enemies. While this nullifies much of the creepiness factor of the mansion, in a way that's the whole point: Luigi is the one who is scared, not the player, and we laugh at his expense. Speaking of Luigi, his animations are easily the highlight of the game. This game was the first time that Luigi was explicitly given cowardice as a character trait, and every move he makes, from his shaking hand when he opens a door to hunching over his flashlight while running around with low health, comically emphasizes his fright.

The soundtrack by Kazumi Totaka and Shinobu Tanaka takes the Super Mario World approach of using a single motif and remixing it throughout the game. Luigi's even whistles it to himself to indicate that the room is clear of enemies.

GAMEPLAY
Officially, Luigi's Mansion is an action-adventure title, but its gameplay is a simplified version of the "trapped in a house" survival horror tropes seen in games like Alone in the Dark, Resident Evil, and Clock Tower. Luigi navigates a haunted mansion, defeating ghosts which drop keys that unlock new rooms. Progression is at first marked almost entirely by collecting keys and unlocking doors, leading up to a boss fight at the end of each area. The game also tries to find a happy compromise between the tense gameplay limitations of survival horror and outright frustration. Health is a constant issue, but every piece of furniture in the game has a small chance of dropping a heart for a precious 10 HP, which can help Luigi survive just a bit further, and the player is encouraged to search nooks and crannies wherever possible. Another good example is the save system; rather than having typewriters and limited ink ribbons like in Resident Evil, the player instead saves their game by talking to Toads throughout the mansion. The player can save whenever and indefinitely, but with the tradeoff that they always restart the game in the Foyer on the first floor.

The ghosts that prowl the mansion can only be defeated by capturing them with the Poltergust, and it's these frantic battles that make up the majority of the gameplay. Capturing a ghost usually only takes a few seconds, but the visual design, the music, and the wild analog stick-based controls make the experience feel unbelievably frantic, like trying to tame a wild bull. The boxing-bell ding when Luigi's flashlight shines on a ghost's heart never gets old! I also appreciate how the game encourages the player to turn the tables on the ghost's jump scares by turning off Luigi's flashlight and shining it as close to the ghost's faces as possible, which stuns them for longer. Occasionally the player runs into special Portrait Ghosts, who are essentially minibosses. These encounters are easily the best part of the game, as they require lateral thinking and an extra puzzle to even make them vulnerable to the Poltergust, let alone capture them. 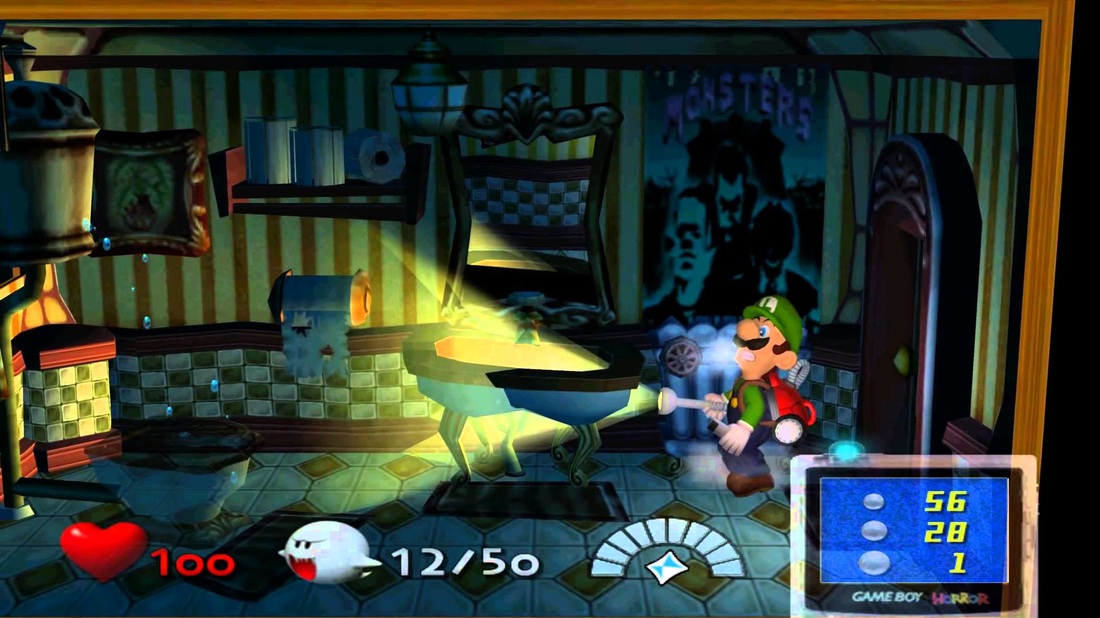 Unfortunately, the combat has its issues, especially later in the game. The analog stick-based combat can sometimes fail to respond properly, especially when attempting to capture multiple ghosts. There's also a mid-game mechanic where Luigi gets access to elemental powers, and encounters special ghosts who can only be harmed by ice, fire, or water. However, the rock-paper-scissors gimmick is made tedious and frustrating because it's only possible to hold one element at a time, and the player is required to memorize the respawn locations for each element throughout the mansion; not even the in-game map tells you where everything is. I also found that towards the end of the game, during the blackout in Area 4, there was far too much backtracking, and the enemy-rush style fight against Vincent Van Gore felt disappointing after the three proper boss fights before him.

CONCLUSION
Despite some pacing issues towards the end of the game and a pretty bad final boss which I won't spoil, my experience with Luigi's Mansion was a good one. It's hardly a survival-horror masterpiece, but it's a fun little romp that's worth the investment for any GameCube owner.