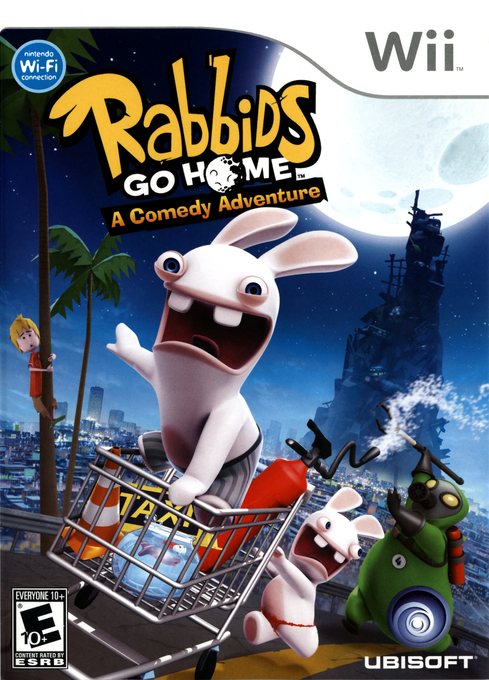 Ubisoft’s Les Lapins Crétins, or Raving Rabbids, were first created as antagonists for the 2006 Wii party game Rayman: Raving Rabbids. Rayman was a beloved 90s platforming icon returning from a long hiatus, but the Rabbids stole the show with their elaborate slapstick comedy, oddly endearing stupidity, and trademark scream. After mixed long-term reception, the Rabbids spent the next few years mostly starring in viral videos and the occasional party game.

Naturally, it came as a surprise in 2009 when Rabbids Go Home was released, as by this point consumer opinion of the Rabbids had reached a nadir. Thankfully, Rabbids Go Home is a deliciously twisted game with convention-breaking gameplay, an inspired soundtrack, and deliciously black comedy. Rabbids Go Home showed gamers that the bonkers bunnies had more than a few new tricks up their sleeves. 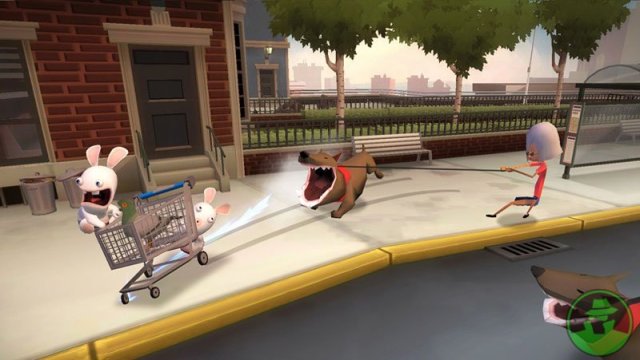 STORY
The game's story is laughably simple. One day, the Rabbids decide they want to go home, and apparently said home is the moon (incidentally, this probably made the Japanese localization really easy). The Rabbids go on a quest to build a massive junkpile that can take them to the moon, stealing everything they can from a nearby human city, from remote-controlled cars to hospital equipment to cows.

There are a few subplots with recurring human NPCs, and a general sense that the city is sugar-coating an extremely bleak Orwellian nightmare. However, much of the game's humour comes from the Rabbids' inability to understand any of this, while the player catches on to every hilariously depressing detail as the game progresses.

Rabbids Go Home also has an incredibly adult sense of humour, on par with 90s-era Warner Bros. cartoons like Animaniacs and Histeria. There were more than a few jokes that raised eyebrows, even with the game's E10+ rating in North America, but far from being offended, I was actually impressed. It gives the game a distinct sense of personality and edginess you won't find in many other games like this.

PRESENTATION
Even for a Wii game, Rabbids Go Home's graphics are simplistic, though in this case the low polygon count is mostly intentional. The human characters are both literal and metaphorical squares, with blocky torsos, jerky animation, and unmoving lips, highlighting the banality of the human city.

Meanwhile, the Rabbids' character models haven't changed much since 2006, but this allows for the player to completely customize their Rabbids' appearance without pushing the Wii's hardware. The Rabbids' animations are also considerably smoother than the humans.

Additionally, several steps have been taken to make the Rabbids more tolerable now that they are the main characters. For instance, their trademark DAAAAAAH! scream is now a more subdued BWAAH!, which is a relief seeing as screaming is the primary melee attack. Unfortunately, some annoying sound mixing errors still exist, especially when attacking human NPCs, which hurt the experience but don't exactly ruin it.

The real star of the show, however, is the way that the humans and Rabbids are defined by their taste in music. The humans prefer easy listening from the mid-20th century, and in-game radios play songs by The Del-Vikings, Dorothy Moore, John Denver, Harry Belafonte. The Rabbids, meanwhile, prefer gypsy brass (ON-SCREEN DISCLAIMER: That's the actual name, not mine!), a fusion of traditional Romanian music and a style of Serbian martial folk music known as Truba. The brass soundtrack for the Rabbids, performed by the French-Romanian band Fanfare Vagabontu, consists mostly of rearrangements of traditional and popular songs from the region, like Bubamara, Ciocarlia, Perinita and Sanie cu Zurgălăi. 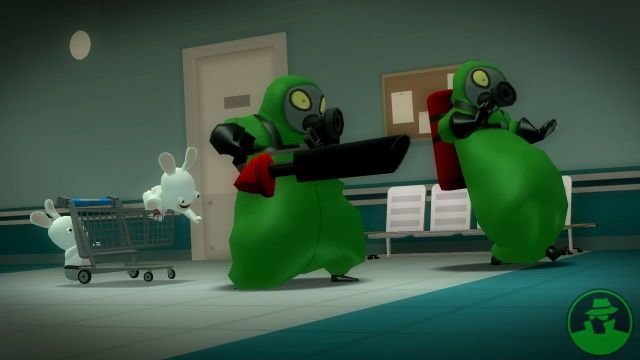 GAMEPLAY
Rabbids Go Home is a weird little game and describing how it plays has been a bigger challenge than actually playing it. Ostensibly, Rabbids Go Home is a collectathon, as players must amass a 23,000 ft. pile of Stuff, as the game calls it, to unlock the final level. Most levels contain 1000 ft. of Stuff, with one mandatory piece of Extra Large Stuff that’s 600 ft. high and another 400 ft. of smaller Stuff scattered throughout the map. For most of the game, the player controls three Rabbids. Two of them drive a shopping cart and steal Stuff from various areas in the city, while the third lives inside the player’s Wii Remote and can attack enemies and objects from afar using the Wii Remote’s pointer.

The controls are deliberately slippery and chaotic, and handle about as well as one would expect from a shopping cart piloted by two insane rabbits. To remedy this somewhat, the shopping cart has a Mario Kart-style speed boost to compensate for sharp turns. The boost has a steep learning curve but is quite fun to use, and skilled players can even use the boost to immediately pick up small Stuff dropped by NPCs, rather than having their personal belongings scatter everywhere.

As for the level design, well, that’s a little harder to describe. Levels are mostly linear despite the emphasis on collection and exploration. Players will encounter fetch quests, platforming puzzles without a jump button, platforming puzzles WITH a jump button, races, air vent mazes, chase scenes, torturing an amused Rabbid inside your own Wii Remote by waggling it, precarious bovine heists with physics puzzles over teetering construction equipment, combat arenas where the Rabbids strip-shame their human enemies into submission, and other levels where the player just hangs out in an open map and collects Stuff until they don’t feel like it anymore. Action-Adventure games have a longstanding tradition of mixing and matching different gameplay styles, but in Rabbids Go Home these changes are so frequent that at times it almost plays like a minigame collection. In another game this lack of focus might be distracting, but here it complements the Rabbids’ chaotic charm, and I rarely felt like I knew what was coming next.

Sadly, the game starts to run out of ideas towards the end, with a few late-game levels blatantly recycling setpieces from earlier maps. Also, while I've praised the speed boost, there are some rather annoying sections where the level design forces players to build up speed in extremely narrow corridors as a cheap barricade in certain levels; and other levels awkwardly force players to combine the speed boost with other gimmicks, with mixed results.

The difficulty curve also starts to take an unreasonable spike in the home stretch, which gets especially bad during precise jumping puzzles in a game with intentionally imprecise controls. Even worse, players lose any Stuff they collected upon dying, unless they store their Stuff inside the tuba of a Collector Rabbid (don't ask) - and of course, late-game levels either decrease the number of Collector Rabbids or have none at all. Since there's no lives and therefore no Game Over, these cheap deaths were merely an annoyance to me, but for any players who want to get all 31,750 ft. of Stuff, and not just the 23,000 required to see the ending, prepare for hours of frustration in what is otherwise a moderately challenging game. CONCLUSION
Rabbids Go Home shows that there is beauty in chaos, throwing a half-dozen different genres in a blender, mixed with a blast of Romanian folk music and a healthy dose of twisted black comedy.