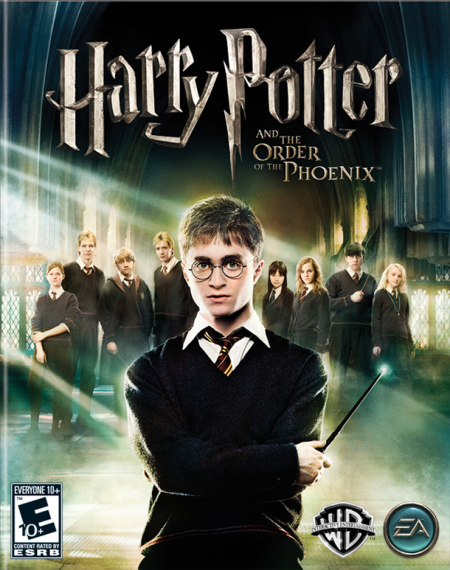 Harry Potter and the Order of the Phoenix (2007)
Reviewed on PlayStation 2
Video Review: https://www.youtube.com/watch?v=BzqfH5YRn-A
VGC's Review: None (yet!)

This review contains several major spoilers for the "Harry Potter" series, just in case you haven't read it yet!

After a disastrous video game adaptation of "Harry Potter and the Goblet of Fire", EA BrightLight once again went back to the drawing board for the next game in the series. Thankfully, this total reboot has proven to be more successful than the last; even with admittedly shallow and frustrating gameplay, "Harry Potter and the Order of the Phoenix" will prove a treat for fans willing to explore the secret corridors of Hogwarts, rather than merely sticking to the intended path. 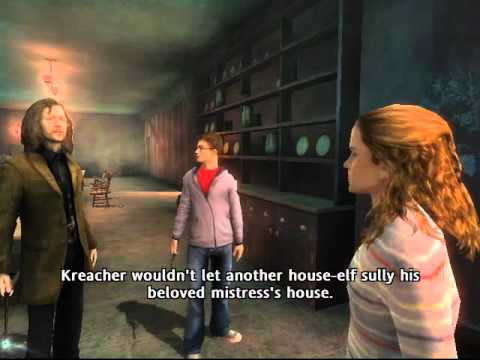 STORY
Lord Voldemort has been officially restored to his old body and is terrorizing Britain for the first time in a decade (but don't call it a comeback; he's been here for years). In a desperate bid to hold onto power, Minister for Magic Cornelius Fudge uses a smear campaign to discredit Harry and Albus Dumbledore, and publicly denies that Voldemort has returned. After sending his senior undersecretary Dolores Umbridge to keep Dumbledore in check, the Hogwarts school body stages a revolt to take back their education, while Voldemort plots from the shadows.

In terms of adaptation, "Order of the Phoenix" is a very mixed bag. Much of the story sees Harry recruiting members for Dumbledore's Army, and later setting up pranks to oust Umbridge. The DA recruitment missions make up at least a third of the campaign, and they are mostly tedious, repetitive, and feel like the worst kind of filler. At least the later Umbridge prank missions feel more important, as each mission has a lasting and noticeable impact on the environment.

Everything else in the main story is competent but suffers from the same storyline compression syndrome as "Prisoner of Azkaban". To give one example, Harry teaches a Christmas lesson, gets kissed by Cho, has a vision of Nagini attacking Arthur Weasley, and wakes up Ron in a panic, all in the span of about sixty seconds. It's also painfully obvious that a full level set in the Department of Mysteries was planned, but had to be cut at the last minute. Thankfully, an amazing final boss fight where the player fights Voldemort as Dumbledore almost makes up for it.

While the main story disappoints, the real charm of "Order of the Phoenix" is in the details. Not only is Hogwarts fully realized at one-to-one scale for the first time, but there are constant references to plotlines from the books and movies at every turn. Ron and Hermione are prefects; Ron and Cho get into a petty argument over Cho's Tutshill Tornados badge; the Fat Lady won't let anyone write down their passwords because of what happened with Neville in "Prisoner of Azkaban"; and Mrs. Black's screaming portrait terrorizes Harry at Grimmauld Place, just to name a few. There are even experience point caches hidden in iconic locations, such as the Stone Circle where Hermione punched Draco in the third movie. It's fantastic fanservice, and for anyone intending to play this game, I highly recommend going off the beaten path as much as possible. 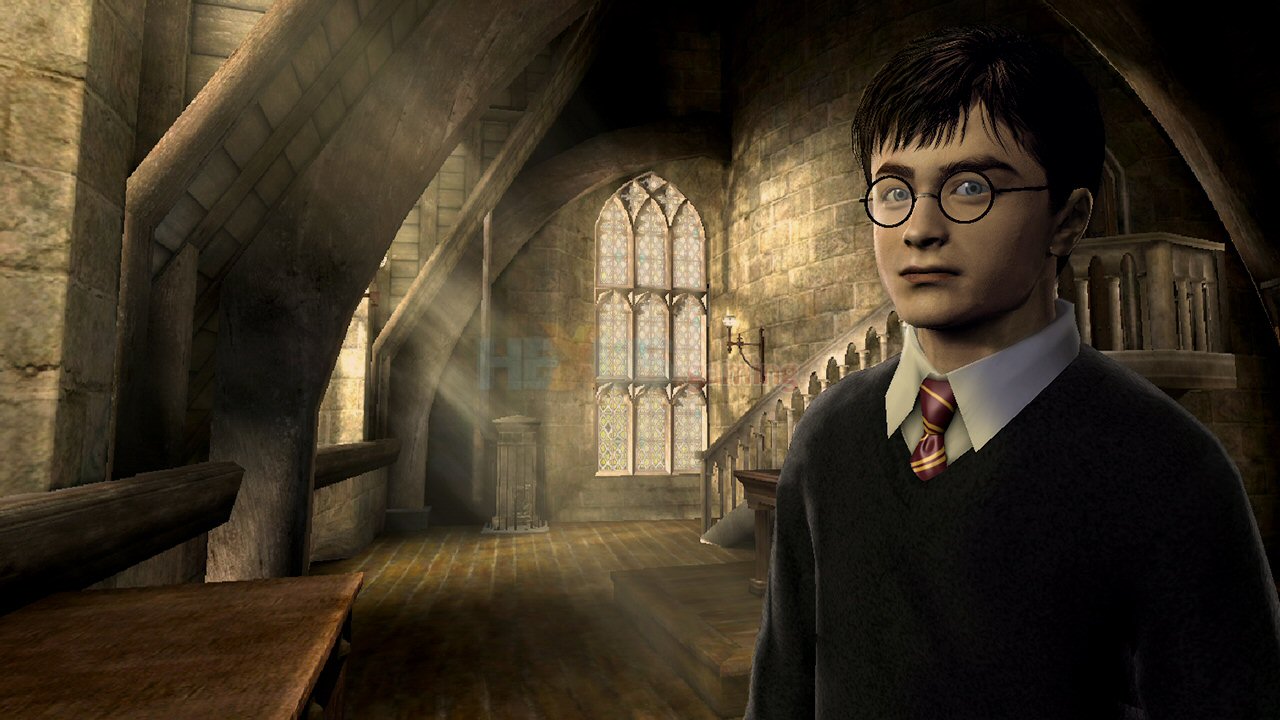 PRESENTATION
"Order of the Phoenix" looks fairly good, but first, I should give a disclaimer. I was unable to secure a reasonably priced copy of this game on Xbox 360, PC, or Wii, so I'm stuck with the PlayStation 2 version. Unlike "Peter Jackson's King Kong", this game was designed for seventh-generation consoles first then ported down to the PS2, and the old workhorse is trying ever so hard to keep up. The game actually doesn't look too bad in 480p; while it suffers from the "brown realism" disease that plagued games starting around 2006, it turns out that the black Hogwarts uniforms stand out well against the faded, washed out Scottish castle architecture of Hogwarts, even in standard definition.

EA BrightLight went all out to make sure this game's version of Hogwarts was as authentic as possible. As previously mentioned, the entire castle is perfectly to scale and filled to the brim with little details for hardcore fans. Whereas "Goblet of Fire" only managed Ralph Fiennes and otherwise relied on soundalikes, "Order of the Phoenix" has 21 actors from the films reprising their roles in the game, including Rupert Grint as Ron and Tom Felton as Draco Malfoy. The soundtrack, composed by James Hannigan, is a mixture of original material, motifs from Jeremy Soule's work from the older games, and, for the first time, John Williams' "Hedwig's Theme", and the game immediately milks it at every opportunity.

Unfortunately, the major elephant in the room on PlayStation 2 is the framerate. It occasionally holds at 30 frames per second, but often dips well below that, especially when travelling outdoors or during particularly intense duels, and occasionally gets so bad that it can interfere with player input. Still, it's impressive that the PS2 can keep up with its more powerful console brethren and render all of Hogwarts without any loading screens; and aside from the odd cutscene glitch or unresponsive spell cast, the framerate is the only significant issue holding back this version of the game. 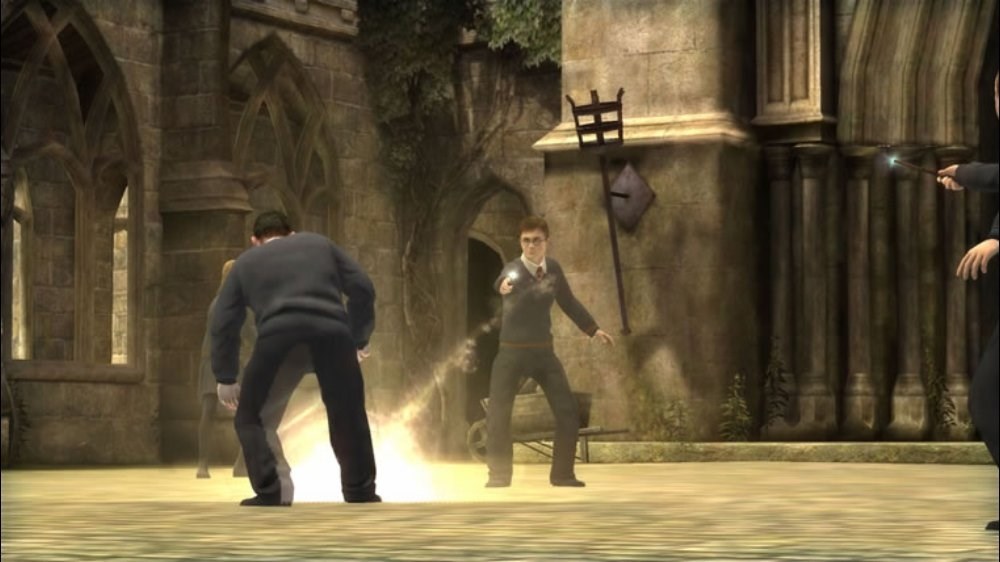 GAMEPLAY
The gameplay of "Harry Potter and the Order of the Phoenix" operates on two major gimmicks: Hogwarts as an open world, and a brand-new spellcasting system. There are some minigames to break up the action, such as exploding snap, wizard chess, and gobstones, but the majority of the game is laser-focused on these two tentpoles.

After a brief tutorial at Number 12 Grimmauld Place, Harry arrives at the Hogwarts Entrance Courtyard and can go anywhere he pleases, from the boathouse to the Owlery to the Herbology greenhouses, with very few restrictions. Immersion and exploration are paramount to the game's design; there is no heads-up display and, as far as I could tell, no way to game over. Using the Marauder's Map, the player can place waypoints on key landmarks, characters, or quest locations, and a trail of footprints will guide Harry to his goal, which can be further sped up by unlocking portrait shortcuts in special sidequests. These footprints can sometimes be difficult to see; they are 2D sprites that occasionally blend in with the ground or move too slowly, but I'm going to give the game the benefit of the doubt here and assume this is an unfortunate side effect of playing the game in standard definition on PlayStation 2.

What I can't forgive is the lack of gameplay variety, and a lot of that has to do with the new magic system. Instead of spells tied to button presses, the player uses the right analog stick, tilting the wand in specific directions to cast spells. At 30 frames per second, the controls are quite responsive, but as I've mentioned several times now, there is a lot of lag on PlayStation 2, and the lower the framerate, the less responsive the right stick becomes. The game seems to have particular trouble distinguishing between Depulso (two flicks forward with the stick) and Wingardium Leviosa (one flick forward, rock left, rock right).

Most story missions, especially the aforementioned Dumbledore's Army recruitment missions, consist of walking up to an NPC, casting one or two spells, then getting experience points, which can also be acquired by cleaning up or repairing parts of the castle. Harry supposedly powers up his spells with each level-up, capping at Level 13, but to be honest, I didn't notice much of a difference. There are also wizarding duels, which are rather infrequent and spread way too far apart; even worse, offensive spells use the same stick movements as the more passive exploratory spells, but have completely different effects, leading to what can only be described as button mashing with an analog stick, an experience I would not recommend. 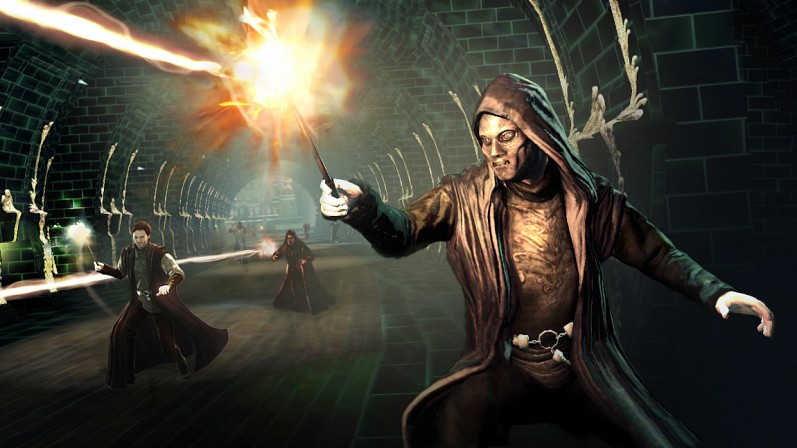 CONCLUSION
"Harry Potter and the Order of the Phoenix" is a frustrating experience, one that could have been great but has to settle for mediocre thanks to a lack of polish. However, despite all my issues with the actual gameplay, the novelty of exploring every nook and cranny of Hogwarts never quite loses its charm. If "Harry Potter and the Half-Blood Prince" can use this game's foundations and improve the pacing of the main story missions, we'll have a real winner on our hands.