This documentary came out earlier this year in 2020. It came up in another topic in the forum ("The Thrill of Buying Physical Games"), so I figured I'd post my thoughts on it.

I just finished watching the documentary last night. Definitely worth watching. It focuses a lot on the physical vs. digital media debate that we often have here on the forums. It's very fair to both sides - highlighting the benefits of each. For example, the movie has a segment about Rocket League (arguably one of the best games of the current generation), and the developer admits that they could not exist and the game could not exist if not for the ability to publish it digitally. (Rocket League eventually got a physical release, but only after the huge success of the digital version). On the other hand, it highlights the problems with phasing out physical media, including lack of ownership. And it focuses a lot on my biggest concern - the inability to preserve digital games for future generations. They go as far as visiting the Library of Congress to see their preservation efforts, along with several non-profits that focus on video game preservation (most notably the National Video Game Museum, which I've visited near Dallas and is a pretty amazing place). They interview lots of great people to explore both sides.

The documentary also focuses heavily on retro game stores, showing a lot about the role they play in keeping these games alive, and the impacts that the move to digital has on their businesses (that impact is mostly negative, of course). Personally, I was hoping that the documentary focused more on the ups-and-downs of these stores and what goes into their success and failure, but that wasn't the main focus of the documentary. The stores are shown more to highlight how they are the consumers' connection to obtaining physical media, and the impact that digital media has on that connection. In that sense, the title is a bit of a misnomer since it really isn't a "video game story documentary". Still, it's great to see my favorite game store (Digital Press in NJ) featured heavily, and the guy from GameZone in Salem, MA was great.

If I was to knock the documentary, I'd point out the lack of structure to it. Sometimes it feels like it's just jumping around from interview to interview, rather than having organized segments and a coherent direction. But overall, that's a small complaint. This documentary won't appeal much to non-gamers, but for the retro gaming crowd I'd highly recommend it. I bought my copy on Amazon for $9.99 (in digital form, funny enough). 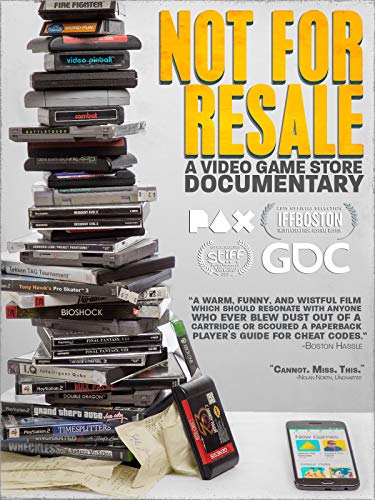 Retrostrife - thanks for taking the time to write this up. It sounds exactly like I expected. Unfortunately I don't feel an overwhelming urge to watch this, because I don't think I'm going to learn much more than I already know.

I do believe physical media will hold on - even if it is a niche market. And that would work for me.

However I would also not count out a "come back" of sorts, especially if you look at music (vinyl comeback) and books (people still prefer paper). Maybe the change of console generations will shake things up, and when people switch a new console they might realize some of their old games aren't coming with them.
Top

VideoGameCritic wrote:Retrostrife - thanks for taking the time to write this up. It sounds exactly like I expected. Unfortunately I don't feel an overwhelming urge to watch this, because I don't think I'm going to learn much more than I already know.

Well don't let me scare you off that easily. I'm just hitting the broad points in that write-up. And in that sense, you're right that the broad points in the "physical vs. digital" debate are obvious and nothing new. Most of us here have already considered all the arguments, and we're not going to see anything in this movie that sways us too far off our positions.

Where the documentary's enjoyment comes is in the nuance. Hearing shop owners and historians talk about physical media. Hearing the GameZone owner talk about how he went from a mail order business in the 90s (and showing off his ad in the back of GamePro) to owning his little shop in Massachusetts for the past 25 years; the interactions with customers; the changes over the years. Hearing from 10 other shop owners at their stores. Seeing a tour of the National Video Game Museum and what they do there. Learning that the federal government is trying to preserve video game history at the Library of Congress, and seeing their archives. Hearing Joe Santulli (of Digital Press Store and the National Video Game Museum) talking about what he has seen over the years, showing the collection he wants to preserve, and showing the basement storage area of Digital Press. There's a lot more, but I don't want to spoil all the moments.

Now, that still might not be up your alley. But I wanted to at least point out that there is a much deeper dive into interesting territory than the broad strokes painted in my write-up.
Top

So does the documentary cover the “Not for resale promotional games“ that are sometimes found. Like didn’t some venders get these games for demos or such back in the day?
Top

Does this documentary explain what the heck "not for resale" means? I'm pretty sure that's written across my Sonic the Hedgehog cartridge.

And what happens if you DO resell it? 100 years in prison?
Top

Tron wrote:So does the documentary cover the “Not for resale promotional games“ that are sometimes found. Like didn’t some venders get these games for demos or such back in the day?

VideoGameCritic wrote:Does this documentary explain what the heck "not for resale" means? I'm pretty sure that's written across my Sonic the Hedgehog cartridge.

And what happens if you DO resell it? 100 years in prison?

Sadly I must report that the documentary does not cover "Not for Resale" games that were pack-ins or promotional items, nor does it show the secret prison that's still holding all the kids (now adults) who sold their Sonic cartridges in the 90s.

Don't let this disappointment hold you back from watching it though.. many other good topics covered.

I think the filmmakers just figured "Not for Resale" was a catchy title for a movie about the impending doom facing mom-and-pop video game stores.
Top
Post Reply
6 posts • Page 1 of 1