Let me know what you think about my reviews.
Post Reply
14 posts

Everybody loves new Atari 2600 reviews, am I right?

Dragster is a re-review, with the original being a very slight version written 20 years ago. The grade changed from C to C-, but don't get the impression I don't have love for this oldie. It's just very short.

Alien's Return is an obscure import I reviewed on my Harmony Cart (it was translated to NTSC at some point).

Two nice reviews. Dragster is a fun read - loved the line about the reset button being the primary button to play the game! Meanwhile, Alien's Return is a review I've been looking forward to for a long time. I own the PAL cartridge, but it doesn't work well on my NTSC systems and TVs, so I was very curious if I was missing out. But looks like I'll survive if I never get to play it.

With Alien's Return though, the game itself is secondary when compared to the legendary box art and the E.T. connection. Alien's Return is very obscure and no one thinks it's a good game -- yet, it still interests collectors enough to sell in the $15-$25 range when it pops up on ebay. The main draw is the fact that it was released with amazingly weird cover art in most regions and, in a few regions, even went by the name "E.T. Go Home", suggesting that it was connected to movie. For collectors of obscure games, it's one of the more fun games to own on the Atari 2600, just for the laughs.

There's some good discussion about the game on the forum here in this prior thread: https://videogamecritic.com/forums/view ... 61&t=17545 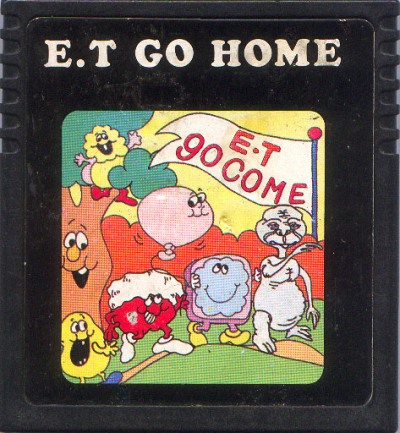 One point I made in that prior thread that I can't help but say again:
"Has there ever been better cover art than that fake ET game? I'm being genuinely honest that it's my favorite cover art of all time, and the only reason I bought the game a few years ago. I mean, I know it's not beautiful like some other Atari cover art, but it's so ridiculous that it's absolutely captivating. I can't look away. Here's an E.T. lookalike, leading a colorful ragtag band of animated objects, including a piece of toast that is way too happy, all topped off with that amazing nonsensical 'E.T. go come' banner. It's the greatest thing I've ever seen in my life."

Anyway.... the point of all this rambling is to say: the cover art and E.T. connection makes the game a lot more interesting and is probably the most significant part of it to gamers, so much so that I think it would be cool to see some mention of it in the review (and maybe even a photo of the cover art). The review isn't quite the same without it.
Top

Funny about the ET connection and the Pac-Man maze style; I was reading an article in Retro Gamer on the development of the (infamous) Atari ET game where the programmer was showing the prototype to Steven Spielberg, the latter asking why it wasn't a Pac-Man style game. (the Programmer told him that because of how Bold ET the movie was, it deserved a Bold game that was not derivative.)

Dragster has a fascinating speedrunning/world record history shrouded in controversy. Which is hilarious for a 7 second game. Lol. Check out this video

Dragster has inspired me to create a "short game" icon, probably in the form of a stopwatch.
Unfortunately I'm no artist so I don't know how to make one.
If anybody can provide me with a 32x32 image that looks good on a black background, I'd appreciate it!
Top

Thanks man! If anyone can tweak this to make the buttons on the edges more visible that would be great!
Top

So I went ahead and added TWO new icons to the Dragster review - one for "short game" and one for "two-player split screen".

I'll start another thread in the general area so we can talk about polishing these up and applying them to other games.
Top

Voor wrote:Dragster has a fascinating speedrunning/world record history shrouded in controversy. Which is hilarious for a 7 second game. Lol. Check out this video

I was about to say. The speedrunning controversy over this game is probably more interesting than the game itself.
Top
Post Reply
14 posts