Let me know what you think about my reviews.
Post Reply
25 posts

These are fantastic games, just as the original Outrun is. I played so much Outrun 2 on Xbox, with great sound via optical cable into sound system! I actually won the Replay Fx Outrun 2 tournament a few weeks back, we played with 4 linked Xboxes and had awesome races! I hadn't played the game in years but evidently still had some skills.

I'd love to own to Xbox version of 2006 Coast 2 Coast but it's hard to get and too pricey. I own the Ps2 version though, but have not played it as much as the original. Maybe I will revisit it soon.

I loved seeing the Sega Gt and Daytona 2 tracks in Outrun 2!
Top

It's literally twice as good.

I say that half seriously because of what sort of an update Outrun 2006: Coast to Coast was. We're not talking about a sequel here, we're talking about a follow-up that essentially took the 15 tracks of the original game, left them as-is, and expanded it with a brand new selection of 15 tracks to select from. So 30 great tracks to race on instead of just 15.

The only changes outside of the addition of slipstreaming/drafting (You get no boost in speed in Outrun 2 when following a car closely) are in bonus content and such. They each got unique extras not available on the other, like what Cafeman mentioned for Outrun 2 (Also has the 1986 arcade classic) and unlockable night versions of tracks and new songs in Coast to Coast.

In the arcade, this follow-up was called Outrun 2: SP. And the Outrun 2: SP additions later were ported to the PS3 and 360 and released as Outrun Online Arcade, sans the original Outrun 2 content (This happened back before Microsoft liberalized XBLA game sizes so Sumo Digital had to stay under a very restrictive 50 MB limit, I believe).

Absolutely nothing wrong with Outrun 2. Looks just as good as Coast to Coast, plays just as good, and has unique content. The only flaw is you're missing out by not being able to select the 15 tracks that Outrun 2: SP added to the base game. Good way to get your feet wet though, and you can always go buy the PS2 version later.
Top

Having some second-thoughts about the A+ for Outrun 2006. My nephews were playing it the other day and the gritty, grainy look of certain stages was making me cringe. Anybody else feel this way?
Top

VideoGameCritic wrote:Having some second-thoughts about the A+ for Outrun 2006. My nephews were playing it the other day and the gritty, grainy look of certain stages was making me cringe. Anybody else feel this way?

On Xbox? I don't own Xbox Outrun 2006 , but I remember reading similar comments but it wasn't clear why. I know I love the way Outrun 2 looks on Xbox, haven't noticed grainy stages. Did Sega lower the resolution on some stages of 2006?
Top

Outrun 2006 was also released on PC, and there is a nice mod for it. You can even buy a physical disc for it with no online authentication requirement. The game can even be downloaded for free on abandonware sites, but I won't condone that here!
Top

Just bought Outrun 2 for Xbox. Thanks for the tips, guys.
Top

By the way, I played these two again with my friend Chris and he verified the graininess was in fact the texture of the roads, so the A+ stands.
Top

These reviews got me on an Outrun kick and I started googling what other sequels are out there. Until today, I never knew about Outrun 2019 for the Genesis. Doesn't look very good (VGC reviewed it in 2002 with a C rating), but considering the 2019 year, it might be good for a re-review! Might make for some funny comparisons to Sega's vision of 2019 vs. reality. 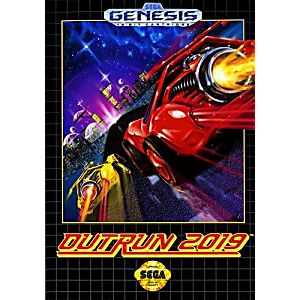 Outrun 2019 actually is quite good.

The gameplay and challenge level is fine, the game offers solid graphics with some special effects that you won't see on any other 16 bit racer (Like racing on an elevated highway while a ground-level road is next to you for scenery), it has a good sense of speed and frame rate, and the soundtrack is solid even though it naturally doesn't reach the heights established by Outrun's classic music.

About all that's missing are some sound effects for competitors when you're passing them, but it handles the audio limitations of the Genesis better than most Genesis racers. And it's not as bright and colorful as an Outrun game should be, but it also wasn't created originally as an Outrun game. That name got tacked on at the very end of development.

Retro STrife wrote:Most recently, the Xbox 360 and PS3 got Outrun Online Arcade in 2009. Looks like it was download-only for $10, looks similar to Outrun 2, but not sure if it's still available.

It was delisted years ago when Sega's Ferrari licensing agreement expired. Outrun 2006: Coast 2 Coast was pulled from digital PC storefronts at the same time.

Those SP additions to the base Outrun 2 game were then ported to the PS3 and 360 a few years later as Outrun Online Arcade, but without the base Outrun 2 game. Microsoft had strict size limits at that time for Xbox Live Arcade games since this was an era where many active Xbox 360 owners were getting by without a hard drive attached to their system, so Sumo Digital had to make draconian cuts to the game to make it fit.
Top
Post Reply
25 posts