Let me know what you think about my reviews.
Post Reply
37 posts

Let me know what you think about these two Switch reviews! Your feedback matters!
Top

VideoGameCritic wrote:Let me know what you think about these two Switch reviews! Your feedback matters!

Great reviews, critic, but if you thought Horizon Chase Turbo was a Switch low point, wait until you play the infamous Troll and I: https://crappygames.miraheze.org/wiki/Troll_and_I and dare I say the abysmal Ark Survival Evolved on Switch port https://www.youtube.com/watch?v=O6kN73PuygI this ports graphics are so bad it makes most of the Switch versions look and play like their base PS4/Xbox One versions no joke. Would love to see critic ripping these two to shreds especially the Switch port of Ark Survival Evolved which has resolution lower then a Sega Genesis/Mega Drive game = https://www.youtube.com/watch?v=hf1UXzrZPMM (this song defines the Sega Mega Drive/Genesis that why I use that song).
Top

The Horizon Chase Turbo cars are unlicensed, but they aren't generic. The car to the right in the screenshot is unmistakably a '57 Bel Air, for example. There's a list of all of the cars' real-world equivalents here. (Incidentally, the player's car in the screenshot is the only one that isn't real, instead being a combination of three different cars.)

typo in Turbo.. half the time you do not even notice the cans until you have driven past them...
Top

BlasteroidAli wrote:typo in Turbo.. half the time you do not even notice the cans until you have driven past them...

The gas cans. Not a typo.
Top

Horizon Chase should probably get the "online only" icon if it keeps bugging you about internet connections offline.
Top

Great game in my opinion. But everyone's taste is different, so it's good in a way to see a diverging opinion out there on this game when it's largely garnered praise from those that have played it.

I did find the review just a bit contradictory though with the complaints about how the game is too easy, but then the focus shifts towards complaining about the elements that were overly difficult.

And I smiled when I read what games the Critic thinks it's taking its inspiration from, when the very screenshot he selected is screaming out what classic game they've largely drawn their inspiration from here. 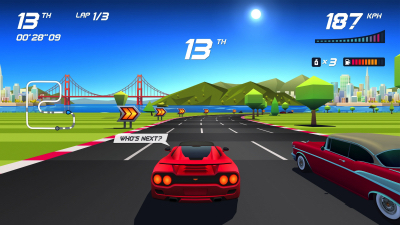 At least you loved the soundtrack, which again was inspired by Top Gear on the Super Nintendo. They even went out and got the same music composer for the project that worked on this early Super Nintendo release. And I appreciate the criticism of the fuel can icons, which I also wasn't fond of. With how heavily they drew on SNES Top Gear here, I don't know why they just didn't copy the pit stops there instead of this lazy, cheap, and not very fun fuel icon mechanic.

On the SNES, you could short fuel your car in the pits if you just needed a splash of fuel to make it to the end, you could risk everything by staying out of pit road in the hope you can coast across the finish line on fumes, you could screw up trying to pit and miss the entrance to pit road entirely and run the car out of fuel, and fuel economy heavily played into vehicle selection with 4 cars with significantly different performance characteristics to select from.

Limited fuel added a ton of strategy and fun to the game, where as the fuel icons in Horizon Chase feel more like a chore to me. I'd rather see fuel removed entirely than the system Horizon Chase uses.
Top

The inclusion of (a copy of) the XJ220 makes a lot more sense now.
Top

I find the Horizon Chase Turbo grade to be odd. While it probably isn't that great of a game, The Critic did find some things he really did like about it, like the music, and even the LA track with its beautiful sunset. The game's biggest flaw is its offline mode, based on what The Critic noted, even if the tracks are mostly uninspired.

To me, an "F" grade means the game is lousy in all areas.. music and all tracks included. "F-" is an unplayable game, or a game that has all the characteristics of an "F" grade, with a bug that makes the game unplayable or not possible to finish. Horizon Chase Turbo, given its few accolades, sounds more like a "D" grade at the lowest.
Top

HCT is described as a mediocre playing game with great music. Yet it is given the lowest score, an F? All because of messages each round reminding that you are offline? This doesn't make sense to me. If it were me, I'd just take 1 minute to set up the Switch to be online. Do the messages make you press a button each time, or just display the error message on screen somewhere?

On PS4 at least, I found this inexpensive game to be a surprising and entertaining fun blast to play. I enjoyed how it doesn't require a huge time sink like the modern Rally and Sim racers. Also, I'm confused by the comparison to Outrun. It only very superficially can be compared to Outrun. The fuel pickups add a good strategy element for some cars and races, plus being topped off improves your race score. Since you have multiple laps, you can pick up gas you missed on the prior lap.

Concerning Dragon's Lair Trilogy, I own it on PS4 and completely agree with the review. These are fun , short, and fair FMV games. So so much more fun than the sega CD versions. Except DL2, which as his review mentions, is ruined by lengthy complicated multiple presses! Egads is it over involved! Play Space Ace on Arcade difficulty or you will miss several scenes.
Top
Post Reply
37 posts