ThePixelatedGenocide wrote:That's a fair point, but isn't computer technology what makes those androids possible? And you can't get the clear multimedia experience of those cities without some computers behind the scenes.

Anything with a screen or a robot (which the Replicants aren't anyway) is cyberpunk now? I didn't bring up Star Wars as a serious example.

ThePixelatedGenocide wrote:Sure, Blade Runner failed to anticipate how radically computers would change our lives, but everything else is there in spades. The dark contrast between state of the art high tech and the lives of those who fall through the cracks. The powerful preying on the vulnerable, through their own pawns.

That's every Charles Dickens novel. This kind of social commentary is part of cyberpunk, but it's also part of centuries of unrelated literature.

ThePixelatedGenocide wrote:The questions of what it means to be human, in a time where it becomes increasingly easy to program an accurate simulation of that humanity.

And a cautionary tale about how easy it is to program actual humanity itself.

ThePixelatedGenocide wrote:To classify it as anything besides cyberpunk, would be like claiming every historical novel with elements that further research later discredited instantly becomes another genre entirely.

This analogy is broken. Are you saying that when Blade Runner "failed to anticipate" the importance of computer networks, it's like how Moby-Dick has outdated knowledge about whales? But Moby-Dick is about a whale, and Blade Runner is not about a computer network; you're equating an imperfectly realized subject to one that doesn't exist at all. You frame this ostensible failure of anticipation as a point where we should give Blade Runner the benefit of the doubt and allow it to be the cyberpunk masterpiece that it truly is, but the logic applies equally to any work that isn't about computers: "Les Miserables failed to anticipate how radically computers would change our lives, but everything else is there in spades." The word "cyberpunk" becomes too broad to mean anything.

There are two parts to that word, "cyber" and "punk". The first, though etymologically offensive, is shorthand for computer networking. The second indicates opposition to the establishment. It's built on a thematic irony: The elite rule through systems that can be subverted against them by the underclass. The word was invented for the title of a story about teenaged hackers who use their skills to rebel against authority, and it caught on quickly to describe a Neuromancer-led wave of fiction using these themes. Its ethos is clear and definite. Blade Runner has only half of it, and it's the least distinctive part.

Thank you for the correction about the nature of the replicants. I've seen too many things inspired by Blade Runner, and had to go back and watch the real thing.

With that said, simply dismissing bioengineered humans designed as a machine metaphor is handwaving the point away. (How many Blade Runner clones simply use machines without changing anything else? Are you going to seriously argue that Ghost in the Machine isn't ever cyberpunk except when computers are a major plot point?)

As you noted, Bruce Bethke invented the term cyberpunk, in the first place. Let's ask him what it means.

The invention of the c-word was a conscious and deliberate act of creation on my part. I wrote the story in the early spring of 1980, and from the very first draft, it was titled "Cyberpunk." In calling it that, I was actively trying to invent a new term that grokked the juxtaposition of punk attitudes and high technology.

William Gibson is the Godfather of the genre. Let's ask him what he thought of the movie.

“Blade Runner changed the way the world looks and how we look at the world,” William Gibson says. The godfather of cyberpunk famously walked out of the movie in the theater, shaken that its visuals had “totally scooped the atmosphere of my first attempt at a novel”—a book, by the way, that became hacker tome Neuromancer—though he finally caught the full film a decade later and came to understand why it was so influential. “It’s a true classic,” he says today. “And it’s become our cultural-visual template for the future.”

So, essentially, you have a movie that offers a cyberpunk aesthetic and atmosphere, with a cyberpunk theme, that tells a story that's only technically not cyberpunk, by the strictest and most pedantic examination of the technology on display.

And yes, Star Wars has trace elements of cyberpunk nearly hidden inside it, unless you simply refuse to acknowledge the bits of war machine dystopia/Coruscant class divide/computer AI/cybernetic parts of it all.

Which wouldn't surprise me, since denying all of that seems to be some people's full time job these days.

Show me the high technology and punk attitude of Moby Dick? Oh, wait, I'll do you one better. 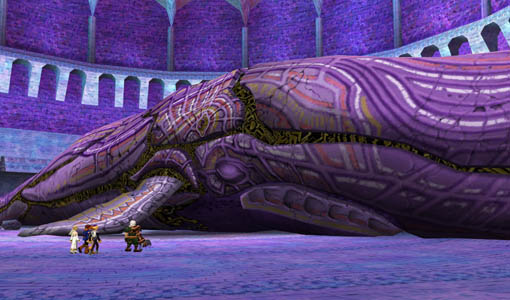 Hey look! It's a spikey haired punk and his friends meeting a flying whale with techno-organic looking magic tattoos, as they fight against the fascists ruling over their land!

Clearly, that's the strawman you intended to go after, instead?
Top

ThePixelatedGenocide wrote:William Gibson is the Godfather of the genre. Let's ask him what he thought of the movie.

Good to know that it inspired cyberpunk's visual tropes, which is literally the first thing that I posted here.

I'm not sure that you actually followed me. Of course cyberpunk is anti-establishment. But if being anti-establishment is all that it takes to be cyberpunk, the category's so vague and open that it ceases to be a category at all. I don't know why you went after my unrelated point about Moby-Dick like that when I explicitly mentioned Dickens and Hugo as having the "punk" angle handily covered – Dickens even specifically highlights the high-tech/low-life contrast in the factory floor of Hard Times. We obviously don't need to treat novels with this kind of conscience as a distinct genre, because that's most worthwhile literature in the first place and thus isn't actually distinct. (In fact, I would include Moby-Dick here.) The same applies to science fiction. You seem to think that "cyberpunk" (whatever it entails) lays some uniquely valid claim to social ethics, that when Star Wars has a scrappy smuggler fighting an evil empire, it's "trace amounts of cyberpunk" instead of one of the most omnipresent themes in fiction. Why call Star Wars and Alien and The Dispossessed and everything else with a moral spine "cyberpunk" (or any discrete name) when they have nothing else in common and are understood no better by being grouped that way? It's redundant. There's fiction, there's science fiction, and then there's a kind of science fiction with a hook specific and obvious enough that people decided it needed a name.

Bruce Bethke wrote:I ended up with this core idea:

The kids who trashed my computer; their kids were going to be Holy Terrors, combining the ethical vacuity of teenagers with a technical fluency we adults could only guess at. Further, the parents and other adult authority figures of the early 21st Century were going to be terribly ill-equipped to deal with the first generation of teenagers who grew up truly "speaking computer."

THEREFORE, if you thought that punks on motorcycles were a problem, just wait until you meet the -- the -- You know, there isn't a good word to describe them?

So you ignored everything except for the most basic visual tropes.

Let's go over it one more time.

Blade Runner is using a bioengineered metaphor for machine people. Their brains are carefully designed to fail at empathy, much like a computer AI, and you can test them the same way you can test any other artificial intelligence. It also questions our own humanity, by comparison. The punk spirit of rebellion is also accounted for, so long as you don't demand every character cosplay as punk.

So the story translates perfectly into cyberpunk, if you aren't literal about it.

Now, make the case for being literal-minded.

Perhaps, we talk about the game or the review itself?
Top Quite a surprise at the book store tonight.
Top

That's awesome! I love dirt-cheap no-name sci-fi paperbacks. Though I do find it funny that Half Price Books lived up to its name and charged you exactly half the original asking price for that one. I would've fished it out of the 50 cent bin, for sure. For three bucks? Ehhhhhh, I dunno...

Gotta love that tagline on the back cover, though: "...definitely NOT for the faint-of-heart!"
Top

Now I want to read the book, if only so I can know what the hell happened in the actual game!
Top

I bought it. Worth every penny. This is one of the most deliciously corny things I've ever seen.

VideoGameCritic wrote:Now I want to read the book, if only so I can know what the hell happened in the actual game! Were you terrified by spine-chilling meows? Stalvern wrote:This is one of the most deliciously corny things I've ever seen.

"I had just finished ramming fresh clips into both pistols..." Hubba, hubba!

OK, I give. Looks like three bucks well spent, Stalvern