Let me know what you think about my reviews.
Post Reply
15 posts

Let me know what you think about my review of PGA Tour 2K21!
Top

Good review as always. This one does look like one playing as the gameplay sound solid. But it is a shame it relies so much on the internet. Those kind of games turn me off a lot. But it sounds promising. It's hard very hard to beat the golf games on the Genesis. But from your review I might give it a shot. I don't know if it's worth purchasing, as I haven't played it myself. But those online sites that rent games I might try. It's hard to pay full price for a game you haven't played. But if I can test it out and it is very good then I can choose to purchase. Again solid review.
Top

Nice review. I didn't even know I needed a new golf game until I read it. I just added this to my Amazon list, and might pick it up once the price drops a bit.

I'm a fan of all sports games, but I don't play many golf games. The Hot Shots series has always been my go-to.. but it's been awhile since I played one. Hot Shots Fore (PS2) and Hot Shots Open Tee 1 & 2 (PSP) were the last golf games I really played in depth. (Played a ton of Open Tee and got pretty addicted. In college, I had a security job that I worked driving around an abandoned insane asylum, and for awhile it was more like I was getting paid to play Open Tee while I was there....) Judging from your Open Tee review, it looks like you had the same thoughts on it.

But actually, the only "simulation" style golf game I ever played a bunch was the old Microsoft Golf game wayyyy back on Windows 95. That was a classic. It's about time for a new one for me.
Top

Driving around an abandoned insane asylum at night would be my dream job! That or a caretaker at a graveyard.
Top

Driving around an insane asylum sounds very much like the PS2 game Manhunt. Except no car and only a chintzy weapon in your hand.
Top

VideoGameCritic wrote:Driving around an abandoned insane asylum at night would be my dream job! That or a caretaker at a graveyard.

Yeah, I worked there on the overnight shift. The place was on a few ghost hunter TV shows over the years too. And how about this for your dream job -- it was an abandoned insane asylum AND it had a graveyard there (we weren't caretakers of it, but hey what you do on your own time is your business...) AND you could play video games on the job and everyone was fine with it. It was definitely a very cool job during college, but the "dream job" part ends when you would see your weekly paycheck...

But hey, since it's almost Halloween, here's a few pics: 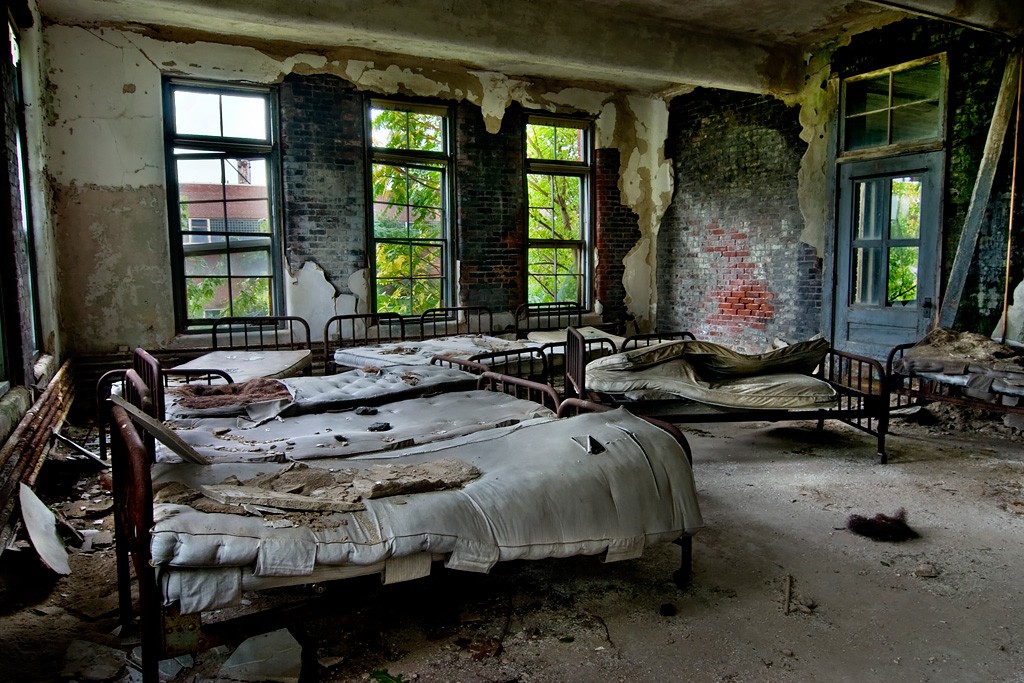 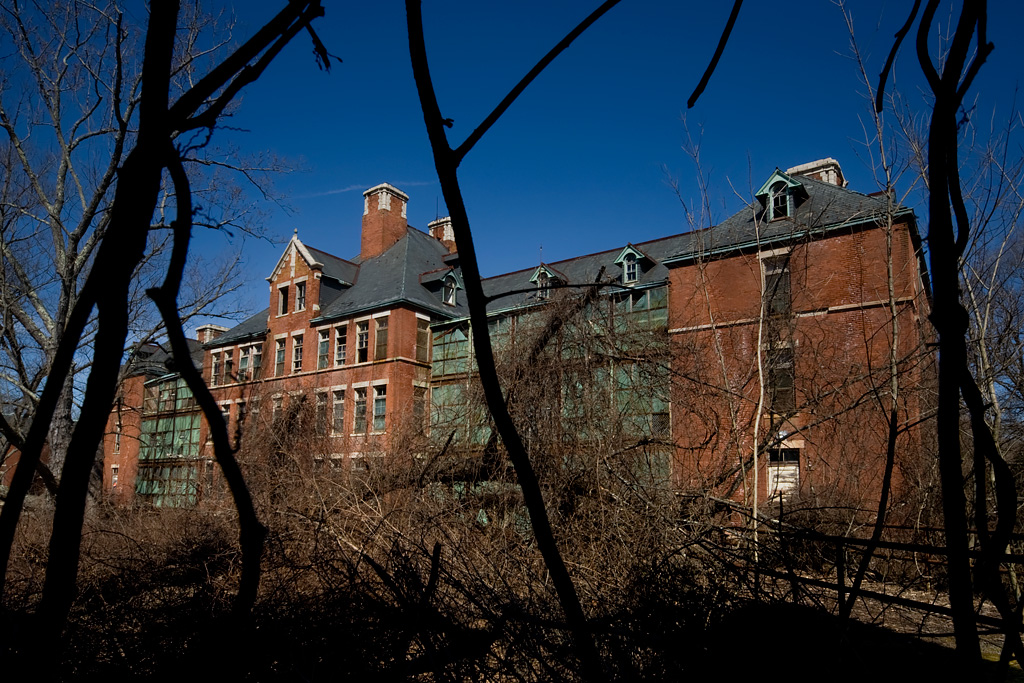 OMG. This is amazing! You need to write a book or something. You may be the coolest guy I've ever met.

Mind if I ask where this is located? Do they give guided tours?

And most important, did you ever notice any paranormal activity??
Top

VideoGameCritic wrote:OMG. This is amazing! You need to write a book or something. You may be the coolest guy I've ever met.

Mind if I ask where this is located? Do they give guided tours?

It was definitely a very cool job - I still have a strong connection to the place, far more so than any other job I've worked, even though it's been 10 years since I worked there. The name of the place is Norwich State Hospital, located in Connecticut. It's fairly well known among ghost hunters and urban explorers, especially in the northeast, so you can find a lot of info and photos of it online. Plus youtube videos by amateur explorers, and professional movies and TV shows too (Ghost Hunters, Life After People, etc.).

There's actually at least 2 books already written about it. One is mostly about the hospital when it was open (https://www.amazon.com/Norwich-State-Ho ... 1467129623) and the other is about the hospital in its abandoned state (https://www.amazon.com/Asylum-Reflectio ... 1461192382). The crazy part about the second book is that I worked with the security guard that wrote it! He was just some quiet old guy (around 70) and turns out he was taking photos and preparing a book the whole time! (Just imagine if you found out, this whole time, Brent has been secretly preparing a book about your job! It was definitely weird to see that book pop up on Amazon.)

As for tours, those were never allowed. The state and local town owned it and they were very worried about liability. That's why they had security, fencing, etc. to keep people out. People still would sneak in of course, but never with permission. But the place was huge - over 50 buildings and over 500 acres- patrolled by just two guards in the middle of the night. If people knew how to sneak in on foot, there wasn't much we could do to stop them.

Some historical background: The hospital first opened in 1904, gradually grew in size through the middle of the century, before its use diminished, and the last building closed in 1996 (though most parts closed years or decades earlier). It was a psychiatric hospital - or a mental asylum or "hospital for the insane" as they called it when it opened - and CT's criminally insane were housed there too. A few thousand patients lived there at its peak. It was like a mini town and it had everything -- long-term patient housing, hospital facilities, restaurants, morgues, a theater, bowling alleys, a gym and basketball court, houses for the doctors, schools for the children, prison cells for criminally insane, a church, a graveyard, and on and on... And underground, most of these buildings were connected by a network of tunnels to allow easy travel and transportation of patients. When I worked there, it was fully abandoned - the buildings and houses all stood empty, like everyone just walked out the door one day and never came back. It was incredibly creepy going through it after midnight, but it’s also one of the cooler places I’ve ever seen.

Sadly there's no hopes of tours anymore, as most of the buildings have been demolished in the past 10 years or so. That bowling alley - gone. That auditorium - gone. Only a few buildings of the original 50+ remain standing. The reality is they were beyond saving, so it was a waste of taxpayer money to let the land just sit in deteriorated state when they could clear the land and sell it.

And most important, did you ever notice any paranormal activity??

That's the question I get asked the most, of course. It was definitely creepy as hell there - even during the day, but especially at night. There were certain areas that we didn't like driving through in our security SUVs, because they were so creepy, let alone going in buildings (the creepiness was insane inside buildings, even the boring buildings). The creepiest part was actually the little ghost town - a neighborhood of like 15 small houses where the doctors had lived, and a school for their kids - it was so weird driving through that little neighborhood of cottages, all overgrown with foliage, especially at night. It was so claustrophobic going down those roads, especially since they were dead end streets with no easy way out if something went wrong.

As for weird things happening... only a few. The weirdest was my car radio changing stations on its own near the graveyard, which went on for several minutes, and happened on two separate occasions. Another time we heard a door slamming over and over inside a building, in a steady rhythm (and with no wind) for like 20 minutes - it was so loud that we heard it from outside the building - but we never found out what it was. Co-workers also claimed a few times that they heard quiet whispery voices when they were standing outside alone at night, but they couldn't make out the words (but that never happened to me). Anyway, I don't believe in any ghost stuff, but I went in with an open mind about it -- and after 2 years, I believed even less in it. I chalk those incidents up to anomalies or imaginations, or actual people who snuck on the property.. I think a lot more would have happened if the place was actually haunted. But then again, I'm a "skeptic" type rather than a "believer", so I'm sure other people would view it differently. Everyone interprets those "paranormal" experiences in their own way.

Overhead map from 2014 of most of the campus, to give a sense of the size and demolished buildings: