So if you want it, don't hold off much longer.

"This month is your last chance to pick up Sega's arcade-ported shoot-'em-up Afterburner Climax on the Xbox 360 and PlayStation 3. Digital storefront monitor lifelower reports that the Xbox Live Arcade and PlayStation Network versions of After Burner Climax will be permanently delisted on December 24." 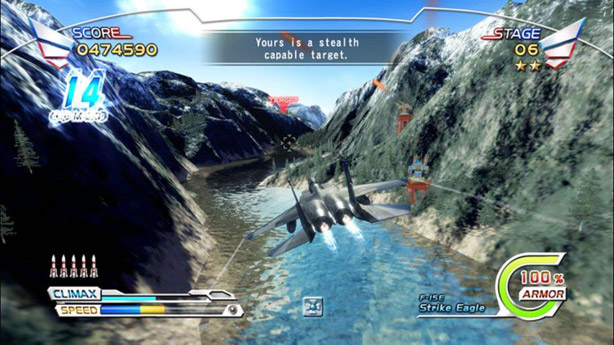 So it will join Outrun Online Arcade and Sega Rally Online Arcade (Which apparently can at least still be found via a download voucher for the 360 version that was bundled with an accessory) in disappearing forever.
For those that haven't already, I'd recommend grabbing Daytona USA HD if you want it. The International Speedway Corp. licensing for the Daytona USA branding is likely running short as well and there's no guarantee that there will be advance warning or that you will see it even if there is.
Top

Why are they doing this?!

If they want to sell them on disc fine - I'll happily buy them.  But I doubt that will happen.

If they are just going away forever, I don't get it.
Top

Afterburner Climax features real-life aircraft designs licensed from their manufacturers (The F-18E Super Hornet and F-15E Strike Eagle from Boeing and the F-14D Tomcat from Grumman). Sadly, Sega's licenses are expiring and they've apparently chosen to not renew them.

The better question is why did Sega put themselves in this predicament to begin with. Hard to imagine that this added expense and the associated hassles was ever justified from the increased sales that this bit of added realism in an otherwise pure arcade flight action game brought to the equation.

Real aircraft designs bring obvious appeal to flight sims, but to me, they seem out of place more than anything else in a game like this. Fictional designs could've done just as well and would've prevented this issue in the first place while saving money.
Top

It's sad when a game get's delisted from PSN or XBLA, I was hoping to try out TMNT: Re-Shelled until I found out it was no longer available.
Top

This is why the all digital future will be a bad thing.   Now people who dont buy the game in the next week will NEVER have a chance to play it. We can expect many more headlines like this from many more digital only games as time goes on. This is actually a time to root for the piracy groups.  Maybe they will find a way to preserve this game.

Anyone who hasn't bought this game yet, please do so. Its an awesome over the top arcade like game.
Top

Yes, it's really a very good game for arcades enthusiasts out there.
I suppose the only way to get it on the future would be to stumble
onto an used system with digital games still attached to the HDD.
Top

Thanks for the heads up I missed Sega Rally, fortunately I got Daytona USA, AfterBurner Climax will be downloaded tonight.
Digital distribution sucks ass.
Top

Sad news, and as others above have already pointed out, yet another of the perils of digital-only games. Never got around to picking this up before; guess now I have the perfect excuse.
[QUOTE=Leo]For those that haven't already, I'd recommend grabbing Daytona USA HD if you want it. The International Speedway Corp. licensing for the Daytona USA branding is likely running short as well and there's no guarantee that there will be advance warning or that you will see it even if there is.[/QUOTE]
At least with this game, there's always a chance of Sega re-releasing it sans licensing, like they did in the arcades as Sega Racing Classic.
On a related note, Tetris: Axis for the 3DS, as well as the Virtual Console release of the original Game Boy Tetris are being removed from the PAL eShop at the end of the year (presumably due to Ubisoft nabbing the licence for their new Tetris Ultimate game). Of course, this isn't as painful an example, as both of these games were also released in physical form.
Top

May I recommend buying Sky Crawlers Innocent Aces for Wii instead of his game?

And there is never a time to root for piracy.....smh.
Top

[QUOTE=Segatarious] And there is never a time to root for piracy.....smh. [/QUOTE]

Oh, I disagree with that when it comes to preservation.

Its great to create, and a person or company should be rewarded for what they create.  To fight to protect what you created is also understandable, but to fight to have something erased is something else.

Sometimes creators can feel threatened by past creations.  Having something never get a physical release is a safeguard against that product harming sales of some future product. Its erasing it from the marketplace.  Perfectly good business sense, and a good business can get laws written to their advantage, but that is not necessarily the same thing as the high moral ground.

For instance, the long running show Doctor Who had a period when older shows were wiped, in part (so the story goes) because the people employed in making new shows felt threatened by re-runs of older shows.  Some of those lost episodes have been recovered...episodes that may have been made or kept illegally.

Or witness some old arcade games.  I grew up playing a vector graphics game called Warrior - one of the first fighting games.  I believe there is only one working arcade game still in existence.  The only way to enjoy and preserve that game would be from emulation.  Maybe the game is in the public domain, maybe its not, but the high moral ground might be to preserve it regardless of what the current copyright holders think.

When it comes to preservation, if piracy is the only way to preserve something, then we should root for it.  It picks no pockets to preserve.