So what classic arcade games would you like to see finally escape the vault? Here's my list of games that I'd love to see make it home finally in arcade perfect form, many of which never even saw a watered down home conversion back in the day.

19XX; The only arcade entry in Capcom's 194X series not to have a home conversion. 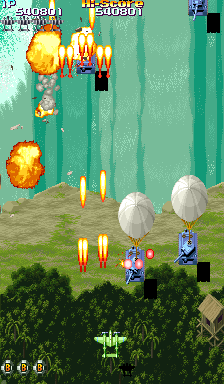 Viper Phase 1; A spin-off from the popular Raiden franchise that sadly has been forgotten.

Gorf; A gem from the early Bally Midway library that plays like a greatest hits collection of everything that made the genre created by Space Invaders so great. Berzerk & Frenzy; Two classics from the Golden Age by Stern, with Berzerk one of the most popular arcade releases from the golden era that has yet to see at home in arcade perfect form. Pepper II; Great Colecovision effort which makes me want an arcade perfect version of it all the more. Turbo Outrun & Outrunners; Two excellent arcade entries from the classic Sega series that have never been done justice at home. Turbo Outrun almost made it in the last round of 3D Classics releases for the 3DS, with Puyo Puyo somehow sadly winning out at M2. Jr. Pac-Man; An unauthorized arcade game from Namco's American licensee Midway. Unlike Ms. Pac-Man which was in a similar position, Jr. Pac-Man seems to not be recognized as "canon" by Namco and has been ignored in the compilation era. Best known for its scrolling mazes and the highest difficulty of the series. Strikers 1945 Part III; The only one of the four games in this series with no home conversion and the most modern of the bunch. Daytona USA 2; An excellent follow-up to what was the most popular arcade racer of the first half of the 1990's.

Turbo; Perhaps the last major unlicensed Sega arcade game from the Golden Age that hasn't been seen at home from the Sega Saturn onwards in one form or another as Sega slowly has released their library from this time. Excellent Colecovision port back in the day, but hardly arcade perfect. Domino Man; From Bally Midway and the same team that created Tapper & Timber. Sadly has been forgotten while those two earlier classics are often amongst the highlights when we recieve a Midway compilation. Solar Fox; The Atari 2600 home conversion was my first videogame. Always wanted to have this one brought to a modern console even though the 2600 game actually is the better of the two in my eyes. Hydra; Essentially a speedboat take on Roadblasters and every bit as good as that one was. Golden Axe: Revenge of Dead Adder; Many a Sega fans' holy grail and still absent to this day at home.

And while hardly a classic arcade game, it's criminal that H20verdrive has yet to appear on home platforms.

Atariboy most of those Were released, but I know you are looking for arcade perfect versions. The only one off the top of my head I want that is arcade Perfect is Chase HQ II. The Genesis version was a terrible version of the classic arcade game. I sunk so many quarters into that machine back in the day.....
Top

There are so many arcade games that I want to play! I have tried so hard to get MEME working, but cant figure it out for the life of me.
Top

matmico399 wrote:Atariboy most of those Were released, but I know you are looking for arcade perfect versions.

Still, it would be nice to see the original versions of the other dozen as well. Some nice home adaptations in that group of course, but still not the originals despite 20 years of home console hardware that has been able to do 100% justice to arcade content from the golden age of arcade gaming.

matmico399 wrote:The only one off the top of my head I want that is arcade Perfect is Chase HQ II.

If by chance you mean Special Criminal Investigation, that is available. But I see on Wikipedia that there's a fairly recent arcade game actually called Chase HQ II.
Top

Atariboy wrote: ... still not the originals despite 20 years of home console hardware that has been able to do 100% justice to arcade content from the golden age of arcade gaming.

This is a neat thread.

From what I gather, there are still lots of games unemulated. Some MAME is not yet capable of, some have no known ROM dumps, some need special controllers, a few predate microprocessors. Arstechnica did an article on the limits of MAME a few years ago.

I am also not sure about specialized screens. Can an emulator really play a vector game ROM? How about a game that used overlays? Does the changing tv tech from CRT raster to lcd grid affect emulation?

The biggest issue I see are controls. What console controller can match sitting on the bike from Hang On? Consoles are about standardization - one setup, many games. Arcades are specialization and immersion.

Like electromechanicals (including pinball), there might always be some arcade games where you 'had to be there'.

One arcade game I would enjoy is 1979s Tailgunner. Its a cockpit cabinet, vector wireframe graphics to create sets of overtaking fighters attacking your fleeing ship. You have first person view, a small precise analog controller, a fire button, and almost hidden a shield button - I think its between your legs. The shield is just a split second pulse that, if timed well, physically repulses the enemy ships. Its awesome, especially for 1979.

Fascinating thread and beautiful pictures! I would love to play those racing games. It's really a shame these games haven't appeared on any compilations.

I really don't know why companies aren't trying to cash in on these while they still can. Just put out compilations of 20 at a time! The hard part is already done!
Top

Always wondered why Reactor was never in a compilation. I mean, yeah, sure, it's Gottlieb, and they don't have many games, but they could make another pinball collection and have unlockable video games.
Top

Robotrek wrote:Always wondered why Reactor was never in a compilation. I mean, yeah, sure, it's Gottlieb, and they don't have many games, but they could make another pinball collection and have unlockable video games.

If it's like Q*Bert that was also from this time and Gottlieb, it actually falls under the Sony umbrella these days.

But they don't seem interested in getting titles like that one, Insector, and Krull out (The latter is a movie licensed game, but it's a Columbia movie and thus also under Sony ownership). Only Q*Bert appears from time to time despite Gottlieb's brief fling with videogames all sharing common hardware, which means that any Q*Bert emulator could also run Reactor.

Seems like they could at least sneak them in as easter eggs next time Q*Bert is released.

For good reason since a lot of the old Midway team was on this project. They undoubtedly were out to create a spiritual successor to that classic. From my one time on a H20verdrive machine, I'd say that they did an amazing job.

Happily Microsoft had similar thoughts right around the same time about creating a sequel. But I think this one is even better than Hydro Thunder Hurricane is (Which was one of the few digital exclusives that the Critic has made an exception for and reviewed, so you know that they did a good job).
Top
Post Reply
20 posts