One of my favorite things about the Dark Souls and Bloodborne games is the story. You’d be forgiven for thinking at first glance that there’s barely any story at all, but you’d be wrong. The story is there—you just have to dig for it. Some of it is told through the environment, other parts are found in item descriptions, and it’s up to us to piece it all together and get a full comprehensive narrative. Of all those stories, my favorite is probably Bloodborne’s. Here, I’m going to try to simplify the deep and complex lore of this story for you guys.

Note: I got most of my information from this video, which I definitely recommend you watch: https://www.youtube.com/watch?v=wjWOy6ioVHI&t=1246s

Also, it’s worth pointing out that some things in here might be considered spoilers.

The first thing you need to know about any Soulsborne game is that you are not the main character. You are, at best, the guy who showed up late to the party and got stuck with cleanup duty. The story of Bloodborne really begins at a college called Byrgenwerth, run by a man known as Master Willem. Willem was obsessed with evolution, and was determined to open the doorway to mankind’s next evolutionary step. It was this research that led him to the chalice dungeons, where mankind first learned of the Great Ones. 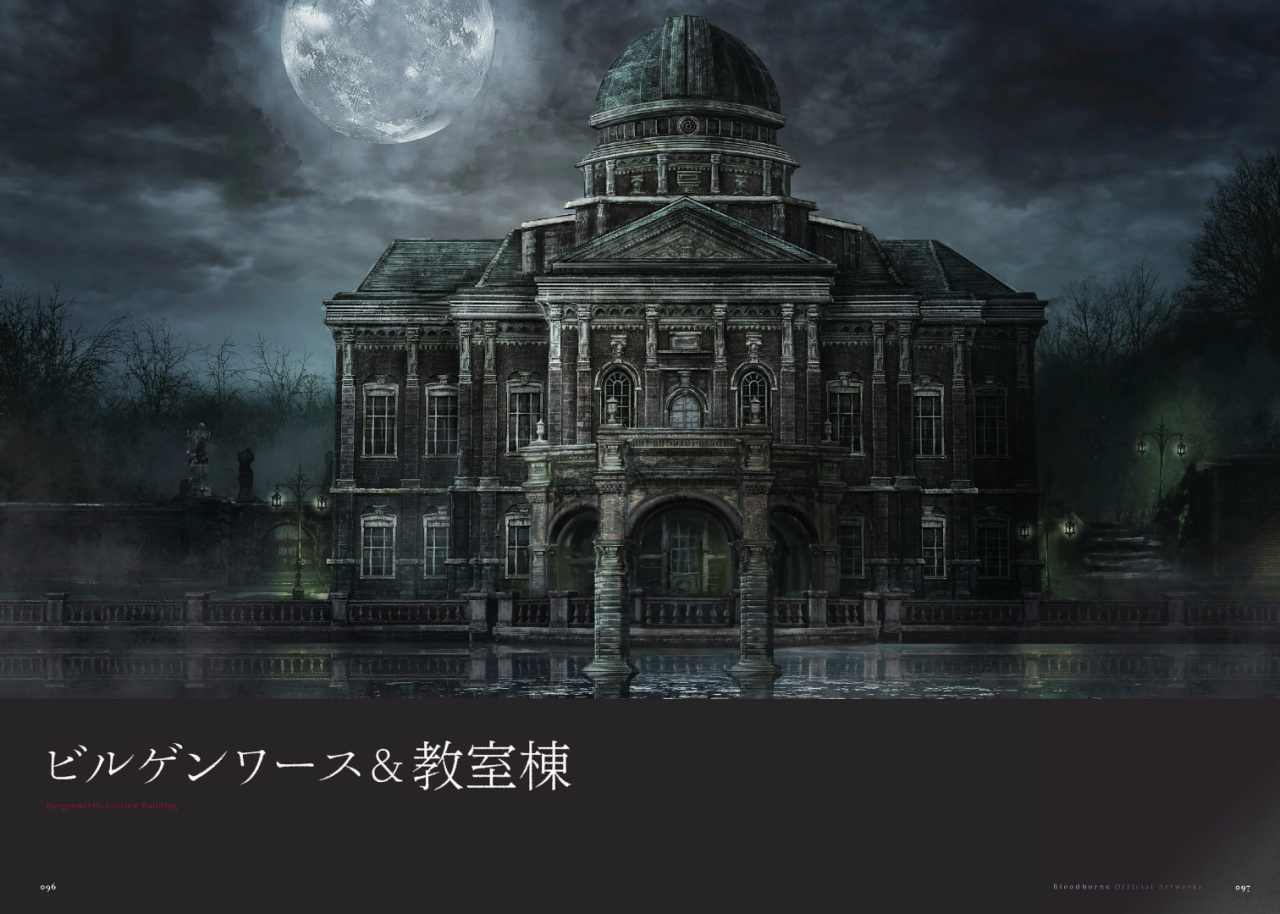 Great Ones are beings far above humanity in terms of intelligence, ability, and understanding. They were so advanced, in fact, that they evolved beyond the need for physical forms, taking on bodies of pure consciousness in a realm that we came to call the Nightmare. But not all of them ascended. There was one, named Ebreitas, Daughter of the Cosmos, who was left behind—abandoned, according to some item descriptions. Master Willem had one student in particular who stood above all the others: Laurence. During his research of Ebreitas, Laurence learned that her blood had the power to cure any injury or illness. It was that which awakened his ambition. Laurence hypothesized that Ebreitas’ blood was the key to mankind’s ascension and would make us like the Great Ones themselves. Willem disagreed, having seen the monstrosities that plagued the ancient catacombs. To him, the only way to ascend was to expand your mind, and the insight you would eventually gain would carry you beyond the limits of mortal consciousness. In the end, Laurence and a small group of students abandoned Byrgenwirth. Laurence’s last words to his master were that he would not forget the school’s motto: “We are born of the blood, made men by the blood, undone by the blood. Our eyes are yet to open. Fear the old blood!” 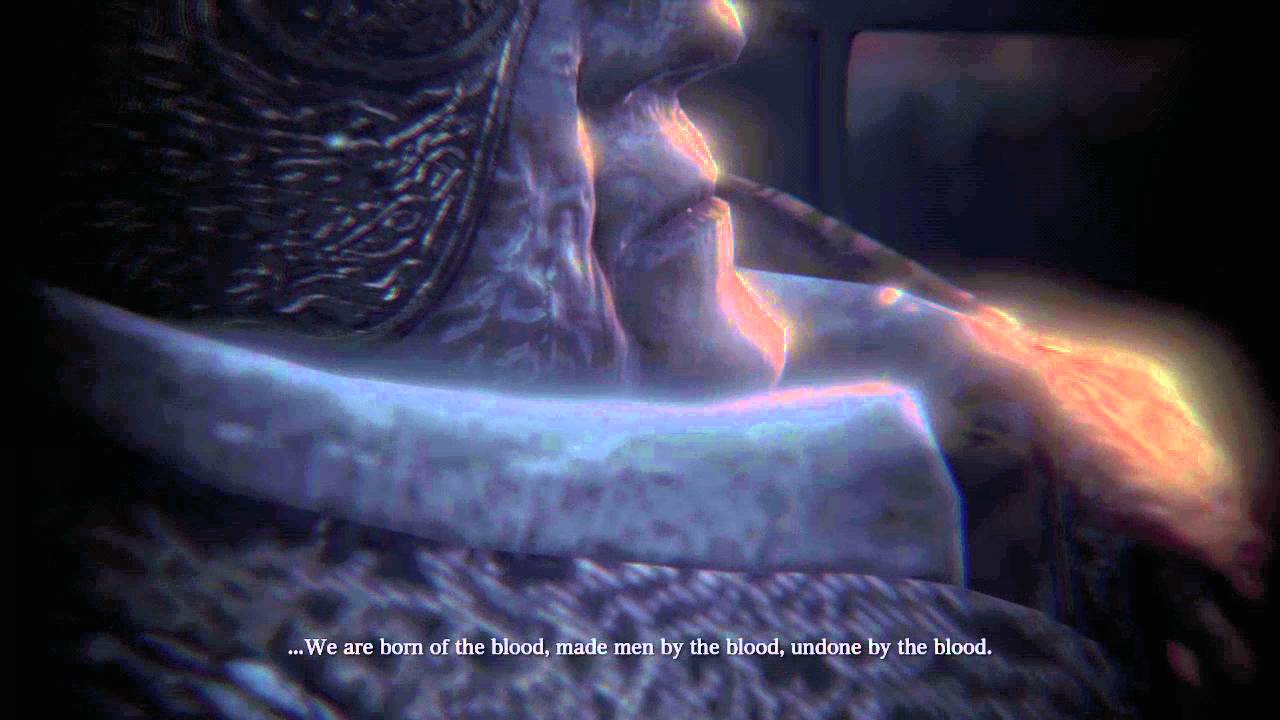 The very first thing Laurence did was break that promise. His ambition stretched beyond human evolution. With a substance at his disposal that could cure anything, there was nothing on earth that couldn’t be his. He just needed to show everyone what the old blood could do.

So he went to Yharnam, a small town that soon after found itself facing a plague with no cure the citizens dubbed “ashen blood.” The only medicine that helped was, strangely, a substance that usually only cured poisoning, leading some to think that Laurence deliberately poisoned the town’s water supply as an excuse to show off his miracle medicine, the old blood. Sure enough, it cured the town’s population, and grew in fame so much that an entire religion formed around it—headed, of course, by Laurence.

Yharnam expanded, building upwards in layers right on top of itself until the city stretched up to the skies, and the village where it began became known as Old Yharnam.

The Healing Church, or Church of the Healing Blood, was only a front, though. In secret, Laurence had the church split into two groups: the Choir, and the School of Mensis. The Choir’s job was to interact with Ebreitas, who had moved to reside underneath the church’s main cathedral. The School of Mensis continued Laurence’s work, determined to find how to use Ebreitas’ blood to evolve mankind.

For decades, everything was well. But then Master Willem’s warnings began to come true. Down in Old Yharnam, the residents who originally proclaimed the power of the healing blood began to transform. It was a slow process at first, easily hidden, and hide it is exactly what the church did. Laurence then created a third branch of the church: the Hunters. Led by a man named Gerhman, the Hunters set out under cover of night to dispatch the bloodcrazed beasts, covering up their existence and protecting the image of the Healing Church. 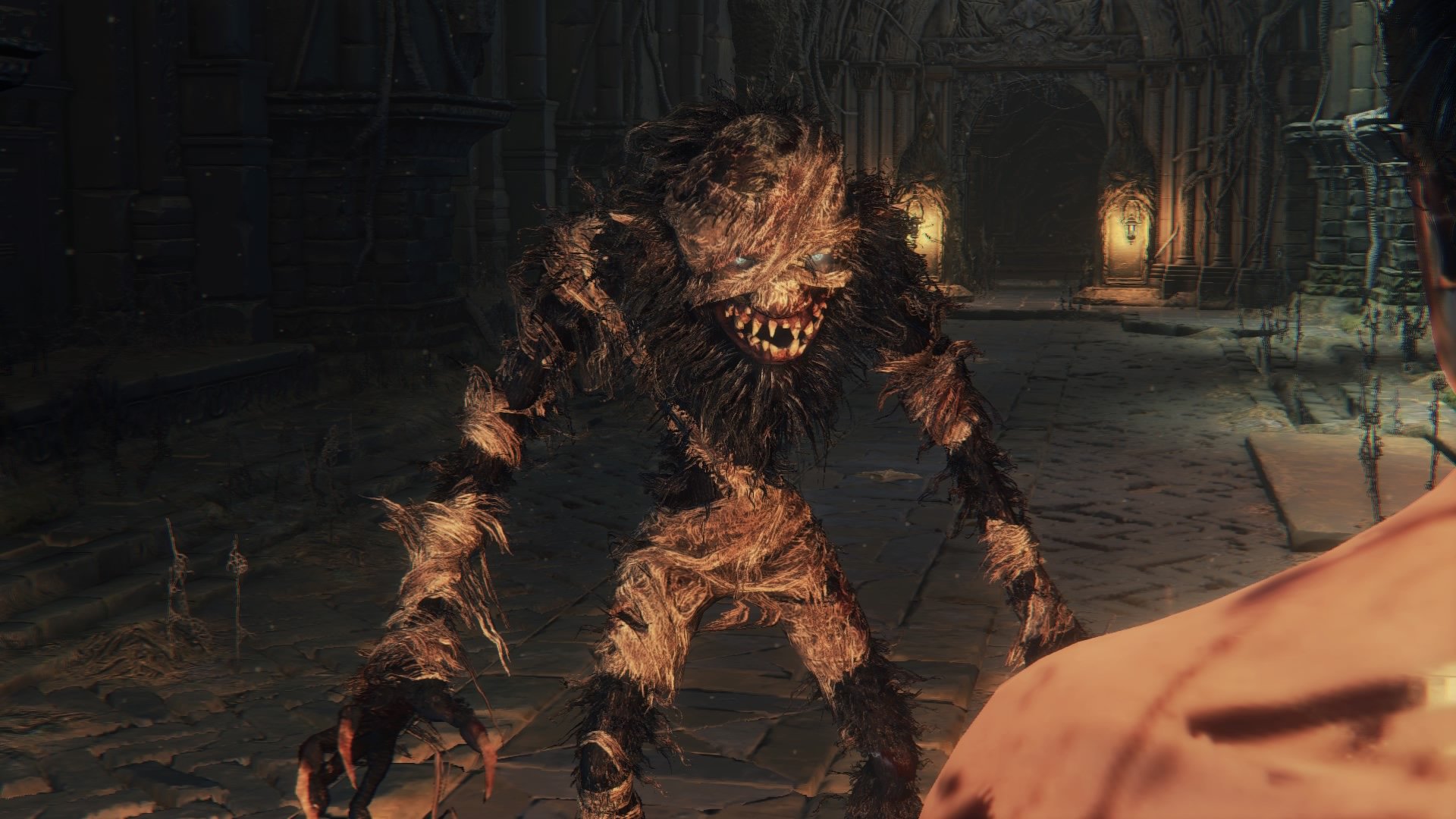 It only got worse from there. The beastly scourge spread through Old Yharnam until there were more beasts than men living down there. Things soon got out of hand, and the church was no longer able to hide it. So the Hunters were revealed to the public the night they marched on Old Yharnam and burned the entire city to the ground, man, beast, and all. That same night, the church locked the gates to the great cathedral out of fear of suffering the town’s wrath. 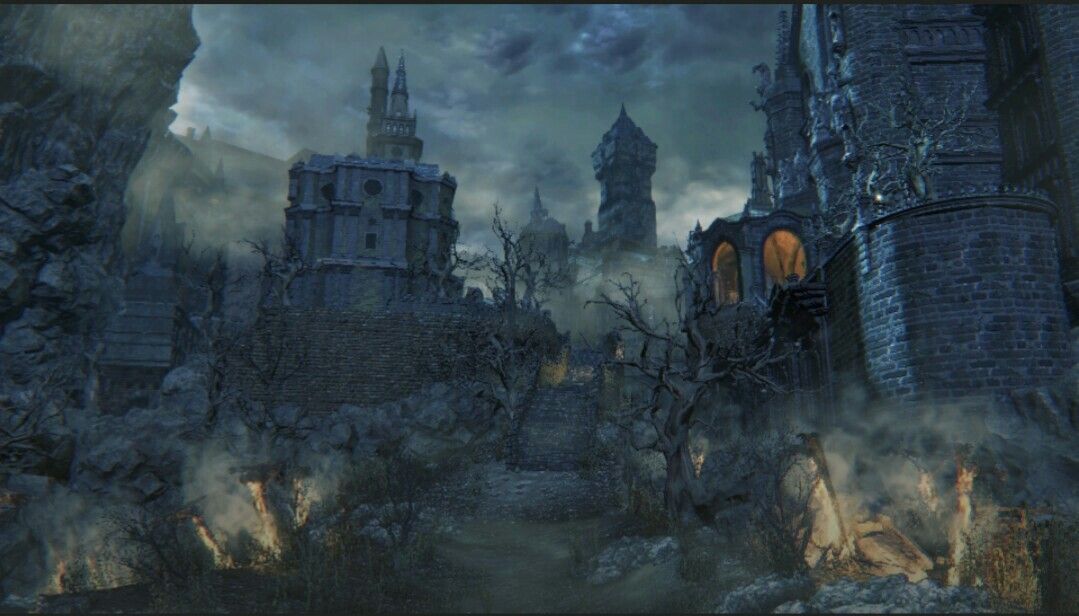 But that wasn’t the end of it. In time, the scourge began to show itself in upper Yharnam as well. In this, Laurence saw a chance to redeem the church’s image. He appointed a man named Ludwig as head of the church’s Hunters. Every night, Ludwig and his Hunters would march across the great bridge into Yharnam and fight back the beasts. They even conscripted normal citizens into their ranks, without training or equipment. This proved effective, as the public came to see the Hunters as their saviors, all but forgetting that it was the church’s blood that had caused the scourge in the first place. But for all their efforts, the scourge continued to spread, until ironically it was beasts that hunted in the streets every night. 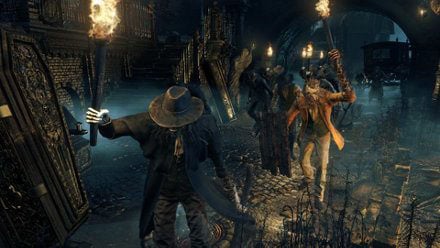 But the church wasn’t the only one to take advantage of the chaos. The School of Mensis, now headed by a man named Micolash, began to act on its own. They succeeded in making contact with another Great One, and as a result they were all pulled into the Nightmare world of the Great Ones. There they learned that Great Ones can not reproduce. Any child they bear will die, making them yearn for a surrogate. But their adoption process is a bit…strange. They must choose a human, raise it to the level of a Great One, and then they must go through the transformation to become a Great One themselves. Micolash is determined to become that surrogate, ascending beyond humanity even if he must do so alone. 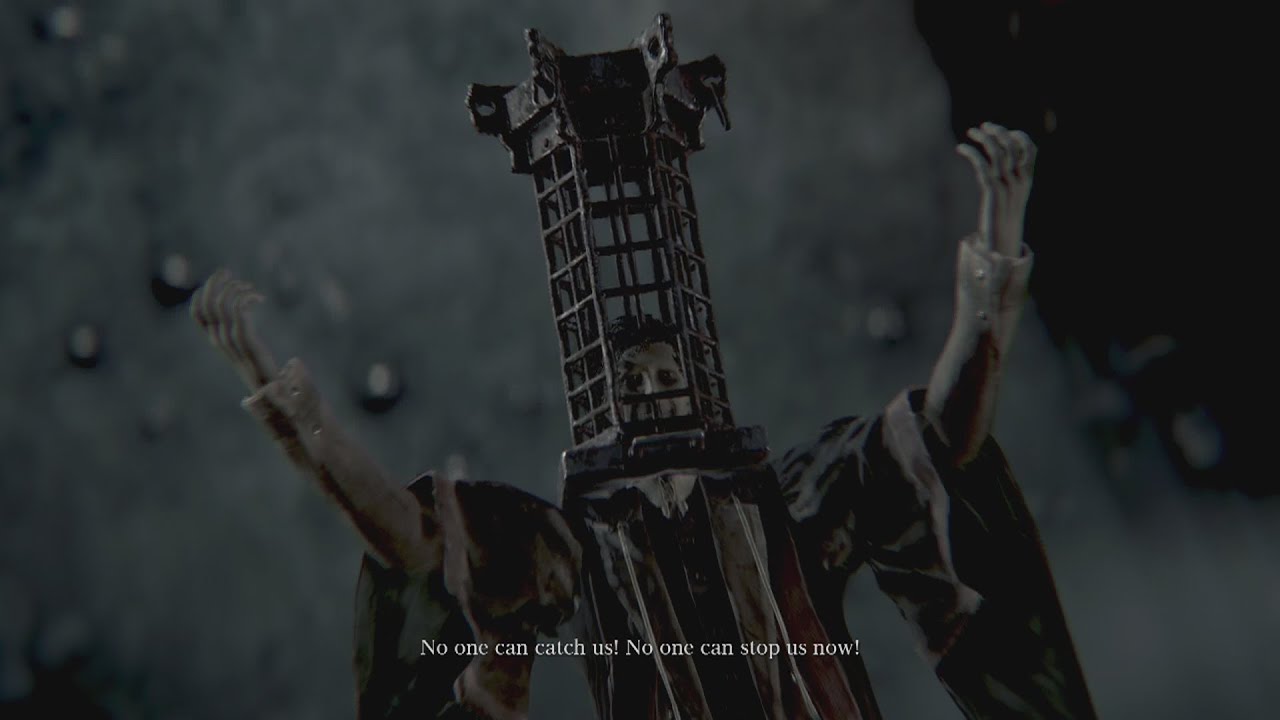 And that is where you come in. Waking up in a Yharnam hospital in the middle of the nightly hunt, your only memory being of you getting a blood transfusion. Now the nameless Hunter must set out to cleanse these foul streets and bring an end to the chaos before the Great Ones descend back to earth and irreparable damage is caused.

The story is deliberately vague, so I probably got some details wrong. Or maybe there's another interpretation of the story you like better. And that's not even mentioning Mergo and its wetnurse, Mother Yharnam, the Hunter's Nightmare, Castle Cainhurt, the Moon Presence, the Orphan of Kos, and so much more. But to get an idea of the events that led directly to where you come into the story, that's all you need to know.

What do you guys think? Did you like this? Should I do more for the other Souls games?
Top

As you once did for the vacuous Rom, grant us eyes. GRANT. US. EYEEESSSSSS.
Top
Post Reply
3 posts • Page 1 of 1