Anybody tried one of these yet? I'd like to hear your thoughts!
Top

Interesting - hadn't even heard of it. Looks like it just got released. On one hand, my first thought was to write it off as a glorified handheld emulator with the gimmick of slapping 20 old games on individual cartridges. On the other hand, I'm intrigued by the ability to play certain games that might otherwise not be readily available, and the cartridge packaging looks nice. I'll be extra intrigued if exclusive games ever come out for it. I'd be interested to hear if anyone has tried it too.

By the way Critic, if you're looking for a new portable system to do reviews for, you should jump on the N-Gage bandwagon. You'd be surprised - decent number of interesting titles for the system.
Top

I was going to order one in the UK this week but they are sold out until the 28th of August. It is sold out on Amazon. The carts I really want are out quarter 3.
They are the lynx ones.
Well I wanted the Data East games. The three game pack in the UK has Atari games 1. That is okay. The Namco collection 1. Now if it was 2 I would be thinking about it. As that has splatterhouse 2 and 3 in it. Then they have the interplay collection. I never bought any of their games and they are not my first choices.
The ten pack of Carts is the one I was getting so I would get the rough with the smooth. Most importantly I would get the titles I most wanted. Burning rubber.. bad dudes... Splatterhouse 2 and 3.
The great thing about the American version is you get the Data East pack
Top

Got this preordered for the 3 pack, supposed to arrive this week from Amazon USA if the ETA is right. For the current packs, the one I am most exited for is the Piko pack, as this has several games that I really want to play - Tinhead, Jim Power (more for the music, and to see if I can best the first level...), The Immortals...

And who knows? Maybe we'll get old Micro releases from the likes of the Commodore Amiga, Atari ST and other classic systems.
Top

I received my Evercade over the weekend, and overall I am very happy with the system. The screen is nice and has three selectable illumination levels, the buttons are large and easy to use (the shoulder buttons are a bit clicky), and the D-Pad is surprisingly well designed.

(PS - if you can, splurge the extra $20.00USD for the Premium Pack that comes with Atari Collection 1, DataEast Collection 1 and Interplay Collection 1; For $99.99 you get a TON of greatness; for the $79.99, you only get the system and the Atari Collection 1 cart. Also, the official case is actually pretty good)
Top

Just got my deluxe edition today. It's a lot smaller than I expected, especially since it contains three collections (and yes, their boxes are included). 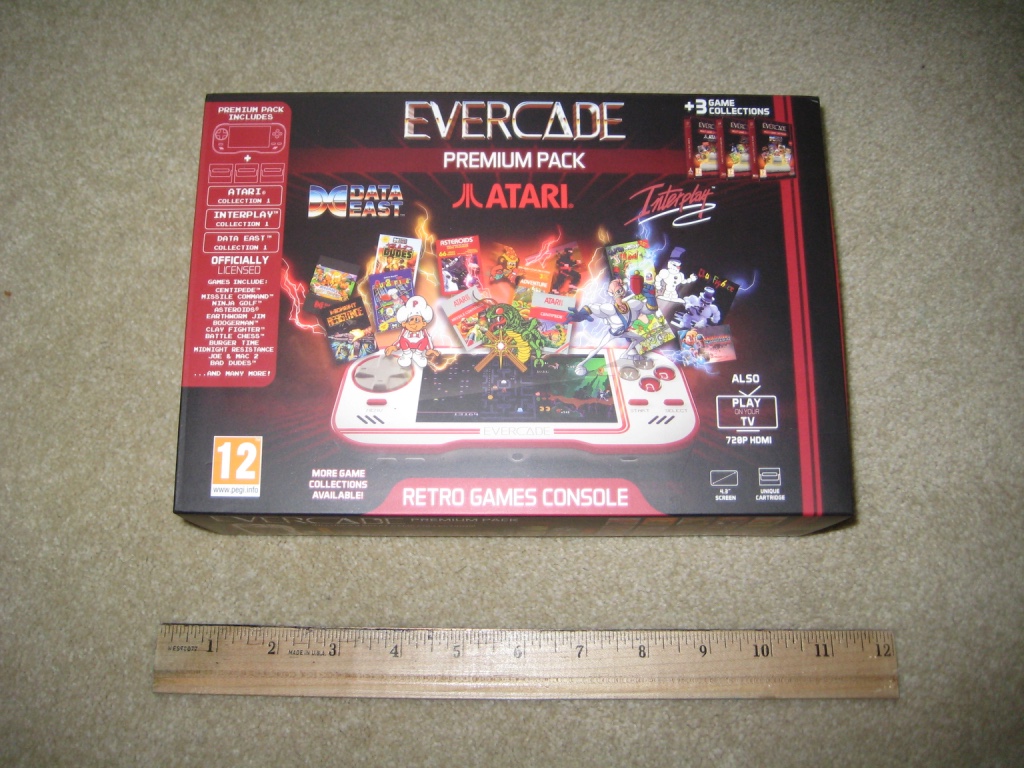 At least I don't have to worry about this taking up much space!
Top

I'm kind of surprised that this system is one-player only considering a lot of games are geared to multiplayer, like Clay Fighter or Steeplechase. Seems to me if you could plug a second controller into the system that would give Evercade another stream of income.
Top

Now fully charged. Just jammed the Atari cart into it (with much difficulty).

Hold on to your butts...
Top

Well I need to buy a mini-HDMI to HDMI cable to play on the TV.

I'm having a lot of mixed feelings right now.
Top

And I have to say, after hearing for years that Ninja Golf was worth a play...they were right. Quite interesting, especially the random bosses at the green.
Top
Post Reply
32 posts