I've been playing Fire Emblem: Awakening for the past couple days, and since I'm new to the series I wanted to play it in classic mode. Classic features permadeath, which incentivizes playing defensively and putting more thought into your strategy, because if one of your soldiers dies (of which you have a finite amount) they are gone FOR THE REST OF THE GAME. It's how the series was originally designed, and vets swear you're not getting the full experience if you don't use it.

I made it five or six levels in before having three of my units wiped out in a single battle. 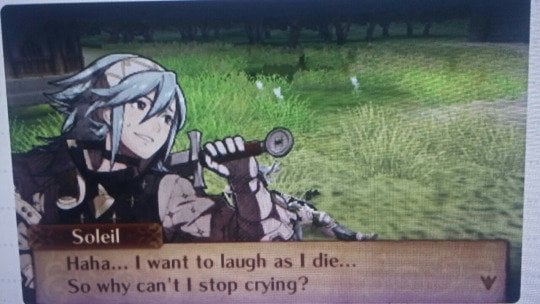 After that, I started a new game in casual mode, where any soldiers you lose will come back after the battle is over. Honestly, I'm having more fun this way. Now if one of my guys dies, I don't have to agonize whether to keep going without them or restart the whole level and try to keep them alive. I feel like casual mode is better for your first time, and then you can move on to classic mode after beating the game when you know what to expect.

To any Fire Emblem players here, which mode do you prefer?
Top
Post Reply
1 post • Page 1 of 1