All the way through?

Finished Minecraft Dungeons on Ps4 tonight. Very short but fun l8l game
and nice change of pace.
Onto the next game!
Top

Just finished Dead Island Riptide on Ps4. Def not as good as the first , but was still fun and I haven't played a good zombie game in a while lol!
Top

Finished Gears of War 3 a couple weeks ago, along with The Guardian Legend and Trials of Mana - at least through Duran's story path. Working on Hawkeye's path now.
Top

Touching on some points from my previous topic about it: the camera and sensitive controls are awful and only got worse as the game went on. Which is a shame because there is a great game here. I’ve always felt Medievil tends to get remembered more as a cult classic, in the tier just underneath Crash and Spyro as definitive platformers for the PS1, maybe that’s why.

That said, I still loved this game. Great sense of humour, so much creativity on show and great variety to the levels.
Top

Beat Chrono Trigger and got New Game+. I've raved about this game for years but never beat the final boss until now. Was worth everything and then some.
Top

Finished up Gears of War 4 this afternoon. Gonna do another playthrough to get the rest of the collectibles.
Top

Well since I played the ps4 version , I thought I'd go through and do the ps3 version as well of dead island riptide.
Getting back into my ps3 a bit as there is quite a few games I haven't finished and will keep me busy ! Lol
Top

Finished Flower this past weekend. This was first available on PS3 in 2009 and also got a PS4 release. It was one of the early download-only games that sparked the trend of artsy gameplay - less about challenging you and more about evoking emotion. You play as a flower petal traveling through the wind, blooming other flowers and bringing the world to life. In 2009 there wasn't much else like it, so it got rave reviews. It's still decent but not great today. The good news is it's usually dirt cheap, and there is a physical media version on PS3, and it only takes like 2 hours to beat. I really liked the first 2 levels, but my interest waned quickly by the 3rd level (there are 6 total). By the end, I was just playing it for the sake of finishing it. The controls are a little tricky too (you control the flower petal in the air with motion controls by tilting the controller) and it take a few levels to fully handle. Playing one level of this game is pretty cool, but it's hard to recommend the whole game.

P.S. The developers follow up game, Journey, is a legitimate classic and one of the best indie games I've ever played.
Top 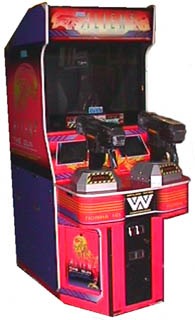 I played through Alien 3: The Gun last night on my arcade using an Aimtrack lightgun over MAME. It worked pretty well. These old lightgun games are pretty fun. You can blast through the whole game in 20-30 minutes. The only thing missing is the rapid recoil from a repeating solenoid to simulate a machine gun.

The quarter sucking affairs of it wasn't all that bad, but if you had to do it at $0.50 a pop it would get expensive. On MAME you can really enjoy it and have fun with it without having to worry about quarters.
Top

Back in October, I beat Parasite Eve on Playstation for the first time. Then I set right to work on my second playthrough to get through the rather daunting Chrysler building. And tonight, I did just that and beat EX mode. What an amazing game! The Chrysler building had it's frustrating moments but overall, this game was incredible. I missed out on it back in the day on account of it being M-rated and I was still a stupid kid who couldn't play those games. But that's okay because Parasite Eve not only holds up but it blew me away. It's criminal that I missed out on this for so long! This might just be a top 10 game for me.
Top
Post Reply
814 posts