Happy New Year! I decided to upload my first review of 2018 a little earlier, as an apology for having to delay my review of The Force Unleashed. Anyway, enjoy! 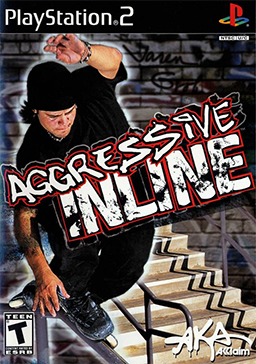 Aggressive Inline is an extreme sports game developed in 2002 by Z-Axis Games, who had previously worked on the Dave Mirra Freestyle BMX series. By the time they made this game, it was obvious that Z-Axis were burned out after making three Dave Mirra games in just two years, and were desperate to try something new. Why else would these developers go from making games about one of the most physically restrictive type of X-Games to one of the least restrictive?
This desire for change becomes blatantly obvious once the game loads, as the new Z-Axis title card contains a quote from the German idealist philosopher Georg Wilhelm Friedrich Hegel: "Nothing great in the world has ever been accomplished without passion."

Unfortunately, passion is no substitute for quality. While innovative and fun during its first few hours, and enjoyable in short spurts, Aggressive Inline quickly becomes a chore thanks to glaring bugs, poor visuals and a lack of substantive content.

Aggressive Inline was made on a significantly lower budget than the Dave Mirra games, and it shows. Even by 2002 standards, the graphics are blurry and ill-defined, though at least the game runs at a solid 60 frames per second most of the time, which is fairly important for an extreme sports game where timing is of the essence. The level design is also uninspired, with only the humourous movie set and neon-lit airport providing any sense of creativity beyond grey, realistic backgrounds.

The soundtrack is also lacking. While some of this is no doubt due to budget concerns, there are good bands out there whose music could have been licensed on the cheap. Instead, Aggressive Inline chose to use the likes of Reel Big Fish, The Ataris, and Hoobastank. In particular, the choice to prioritize Reel Big Fish's "Sell Out" seems like a very cynical move, given how closely the song resembles "Superman" by Goldfinger, the iconic lead song from the original Tony Hawk's Pro Skater.

Aggressive Inline has a fairly standard set of gameplay options — Career Mode, Free Skate, Timed Run, and a Create-a-Park Mode. Unfortunately, the Career Mode lacks the Tournament competitions that break up the action, meaning that there's no actual end to the Career Mode unless the player completes every objective on every level, slowing the pace to a crawl. Even more puzzling, rewards for beating Career objectives mostly consist of extra loading screens or new parts for the Park Editor, which don't feel very rewarding.

To give credit where credit is due, Aggressive Inline shakes up the standard Extreme Sports formula in several interesting ways. Most of these innovations focus on Career Mode: these include experience points system for skill attributes; and fly-by cutscenes to hint at what to do for certain objectives. The game also likes to experiment with regular objectives by giving them small stories from NPCs. For instance, there's one character who shows up in every level asking you to perform a certain trick in a certain location because he wants a good photograph.

Aggressive Inline also gets creative with its gameplay. Since rollerblades are strapped to the athlete's feet, there's no way to perform kickflips like on a bike or skateboard, leaving one extra button free. Aggressive Inline uses this button for special context-sensitive actions such as leveling out when overshooting a halfpipe, hitching a ride on the back of a vehicle, vaulting over objects, and swinging on poles. This game also places a strong emphasis on fakies, or "Cess Slides" as they're called here. At any time, the player can press R2 to start skating backwards, and the Cess Slide will count as a trick in their combo string. It can even be used alongside manuals to chain together combos while in a halfpipe. 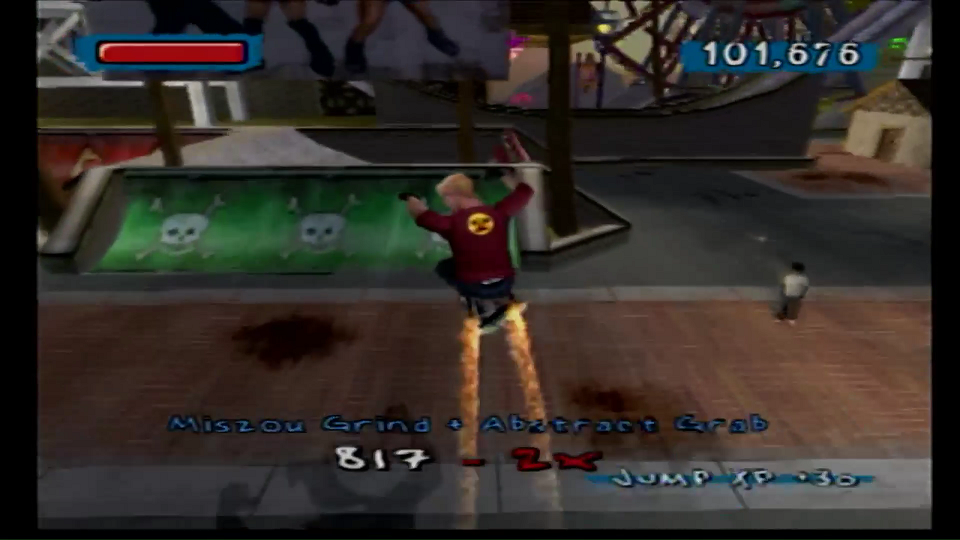 Alas, despite this creativity, Aggressive Inline wastes its potential by not exploring these ideas beyond their surface level. Even worse, Aggressive Inline is glitchy, and feels like it's still in the beta stage. It's not uncommon to fall through the map, land tricks that were obvious bails or vice versa, grind on nothing, or fly through the air as you perform a (normally stationary) handplant. Most egregiously, however, the game falls victim to an obvious exploit with its grinding system, where the player can repeatedly mash the X and Triangle buttons to increase their combo multiplier. And since in Career Mode you gain XP for an attribute as you use it, it can be child's play to literally grind for experience in Grinding, Jumping, and Manuals, all because Z-Axis Games forgot to include a cooldown timer on the grind button after jumping from a rail. As a speedrunner, I normally love these kinds of exploits, but in games like this, it just makes sad for what could have been an interesting experience.

In a way, I feel sorry for Aggressive Inline. They clearly wanted to break the mold with a few clever twists on the old Tony Hawk formula. It's a real shame that these original ideas, while excellent on paper, feel half-finished and aren't fleshed out very well. I wanted to like this game a lot more than I did, and while I certainly had fun with it at first, I eventually realized how shallow and fragile the game truly was, and lamented what could have been.

I had this on Xbox when I was a kid. That version let you use your own music, which I think only a few games offered (I remember this one and the Grand Theft Auto Games).

I don’t remember the game being this bad. I wonder if it’s more glitchy on the PS2 than the Xbox because I recall it being pretty polished even if it was a poor man’s Tony Hawk. It never did hold my attention for long though; it couldn’t compete with Tony hawk 3.
Top

ESauce wrote:I don’t remember the game being this bad. I wonder if it’s more glitchy on the PS2 than the Xbox

I hadn’t actually considered that, but the more I think about it, the more your idea makes sense. It wouldn’t be the first time a PlayStation 2 port got shafted in a multiplatform release either. (I’m looking at you, Sonic Heroes!)

Anyway, if you watch the video review, I show off a few more of the glitches I found on the PlayStation 2 version.
Top

Thanks for the review. I was a big fan of the Tony Hawk games in the late 90s / early 2000s, along with other alternative sports games like it (SSX comes to mind). Aggressive Inline flew under my radar back then, but I did buy it recently, because I learned that it earned very good reviews back in the day (it has around an 86% aggregate score on GameRankings). I haven't played it yet, so I can't weigh in on it. However, your review makes it sound like maybe it hasn't stood the test of time, even if it was good back in the day.
Top
Post Reply
4 posts • Page 1 of 1