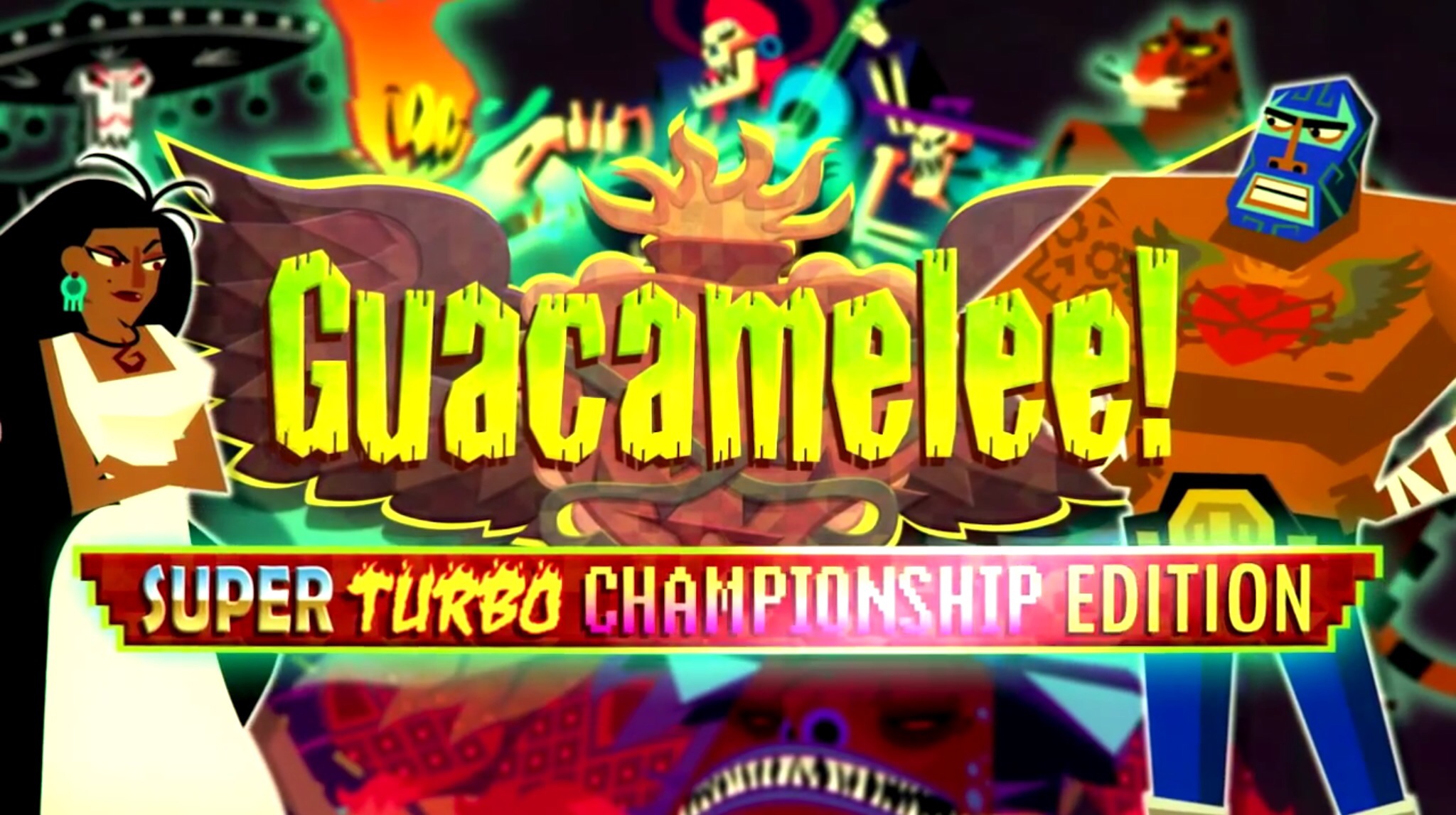 Metroidvanias are a dime a dozen these days, to the point where the best way for a Metroidvania title to distinguish itself is to either be incredibly good or have a high-concept art style. Thankfully, "Guacamelee! Super Turbo Championship Edition" fits both criteria, trading in the dread, loneliness, and isolation endemic of the genre for bright colours and a sense of fun and frivolity. With gorgeous art and vivid, lively gameplay, "Guacamelee!" is the life of the party in the Land of the Dead. STORY
"Guacamelee!" takes place in a funhouse-mirror version of Mexico, where Luchador wrestlers are literal superheroes who save the day for the local villagers. Carlos Calaca, a man who was once tricked by the Devil and has taken over Hell in retribution, kills our protagonist Juan and kidnaps the Mexican President's daughter as part of a ritual to merge the worlds of the living and dead. Juan is destined to become the next guardian Luchador after finding a special Lucha mask in the underworld. Juan and his new companion Tostada go out to save the day with the help of Uay Chivo, a cranky mentor and shapeshifting goat who hides special powers for Juan in Choozo statues - not that he likes it when they're broken.

The story is rich with telenovela melodrama; the game knows this and plays it all for equal parts comedy and drama. The lively characters have a lot to do with this, especially the villains. Calaca himself is a bit generic, but the villain ensemble more than makes up for him. Flame Face is a literally hotheaded drunkard who never seems to learn that his guns need reloading; X'tabay desperately wants to be a femme fatale but is having relationship troubles with her uncaring boyfriend Calaca; The Trio of Death is a hilarious boss that combines musical gimmicks with parodies of kickstarters; and Javier Jaguar is this game's version of Ridley, a proud and honourable warrior who will fight Juan to the death without any gimmicks in a pure test of strength.

It's a funny, entertaining romp through affectionate exaggerations of Mexican culture, and will leave you chuckling right to the end. 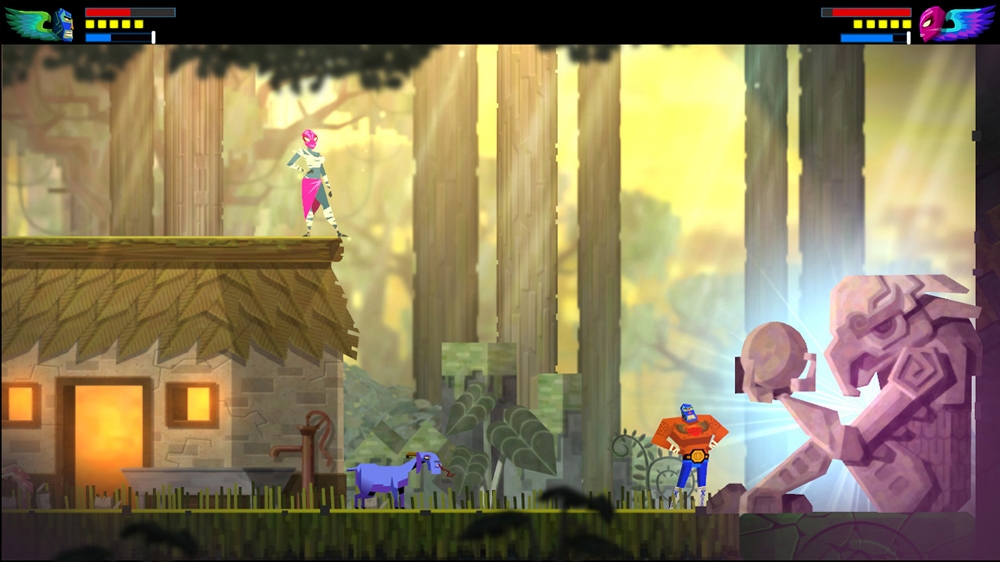 PRESENTATION
Aside from one aspect of gameplay that we'll talk about later, what really makes "Guacamelee!" stand out is the aesthetic. This game is both a giddy tribute and lampooning of Mexico and its traditions and history, referencing everything from Dia de los Muertos to Olmec colossal heads to charreada. It's also a gentle parody of Mexico's passion for Lucha Libre wrestling, and the near-folkloric status given to Luchadores like El Santo, Místico, and Blue Demon; in fact, the design of Juan's mask seems to draw heavily from Blue Demon's iconic mask.

The art style is gorgeous, and every character is painstakingly animated and flows beautifully. The only exception is X'tabay, oddly enough; her hair has a noticeable loop that resets during certain animations. In the grand scheme of things, however, it's an incredibly small nitpick, as the rest of the game's animation is so expressive and beautifully crafted. It's also complemented by a catchy and inventive soundtrack by Peter Chapman and Rom Di Prisco, which can best be described as "Chiptune Mariachi Electronica".

The PC version runs fairly well, though I ran into some issues in windowed mode while recording footage for my video review. While full screen supports every resolution imaginable, the bordered window mode is locked at 720p and doesn't support automatic resizing to any other resolution; players will have to manually resize the window and potentially get a stretched-out screen, or hit the Maximize Window button and play the game at 720p upscaled to 1080p or 4K. The game also locks v-sync while in windowed mode, though anti-aliasing and dynamic shadows can be toggled, an improvement over the previous "Gold Edition" release. Despite these issues, I only experienced framerate stuttering and slowdown once or twice in the five hours it took to beat this game, and it looks amazing no matter what the resolution. 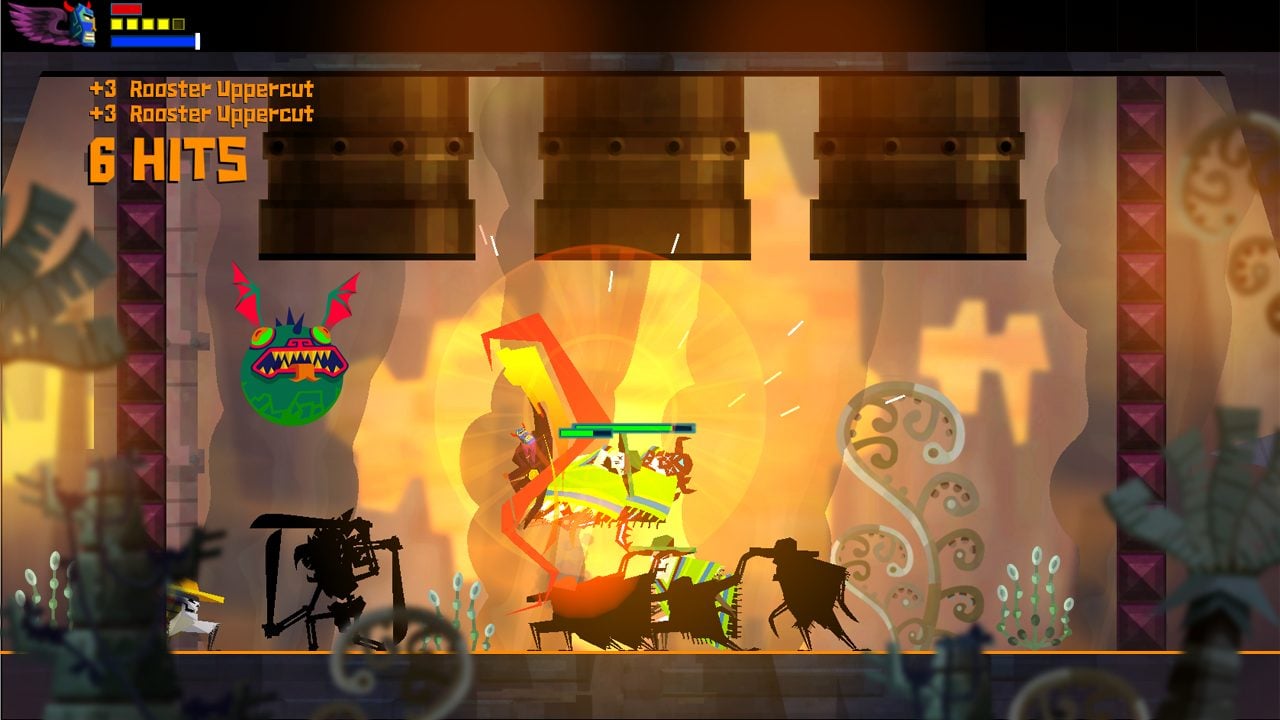 GAMEPLAY
While its aesthetic is new and exciting, "Guacamelee!"'s gameplay is deeply rooted in tradition, borrowing heavily from both namesakes of the Metroidvania genre. Up to four players explore a large, interconnected map, acquiring new abilites and conquering three main dungeons, two mini-dungeon detours, and a final level. The game combines the large-scale combat, heavy cutscenes, clear mission objectives and dual-world gameplay of "Castlevania: Symphony of the Night"; with the focus on item collection and heavy backtracking of the "Metroid" series. The current mission objective is always clearly labeled on the map, but rarely will the player be forced to seek it out.

Juan's moveset combines speed and fighting prowess, with a double jump, dodge, wall jump, late game equivalents to “Super Metroid”’s speed booster and shinespark, and a chicken form with limited combat that is an obvious nod to Samus' Morph Ball. Juan is also able to jump between the worlds of the living and dead, at first using portals, and later with a simple button press, which is used for both puzzles and combat. The controls feel pitch perfect, whether in human or chicken form, and the platforming is excellently balanced and well-designed, with a good difficulty curve on the main path and difficult challenge rooms that reward the player with upgrades to their stamina and health bar.

What truly distinguishes "Guacamelee!" from the Metroidvania crowd is its titular melee system. Instead of guns, swords, or space lasers, Juan, Tostada and company use the power of fisticuffs and Lucha Libre. All fights are hand-to-hand, with one attack button, a grapple, and five special moves tied to the B button with directional influence. These moves can be used both in combat and to break special barriers blocking passage to new areas, but use up stamina. Every move can be cancelled with a dodge, and almost every enemy attack can in turn be dodged with the right timing, which makes combat fast, energetic, and frantic, though depending on the position of the camera, it can sometimes be hard to lose track of Juan in all the chaos. The game further encourages aggressive play by making Juan invincible while grappling. These wrestling finishers are very powerful, though it is fairly amusing to see Juan using a piledriver despite the move apparently being illegal in Lucha Libre.

While it’s pretty clear by now that I love this game, I do some have some small but notable issues. Canal de las Flores and Pico de Gallo, two new side areas added for this edition of the game, are bolted onto the story path in a blatantly obvious fashion. Canal de las Flores also has a gimmick unique to the area, rotating platforms with spikes on one side, that is completely at odds with the rest of the game's platforming, and slows the pace of the level unnecessarily. Additionally, the game has pallette-swapped "Elite" enemies in the late-game. As I mentioned in my "Marlow Briggs" review, I don't mind enemy recycling normally, but the Elites in "Guacamelee!" are unfair and cheap; not only are their attacks way too powerful, but they can teleport after taking too much damage, will randomly appear in another part of the arena (usually right next to Juan) and immediately attack with little time to react. The game also has a habit of placing one or two Elite enemies in a group of regular foes, making it very difficult to keep track of which is which. 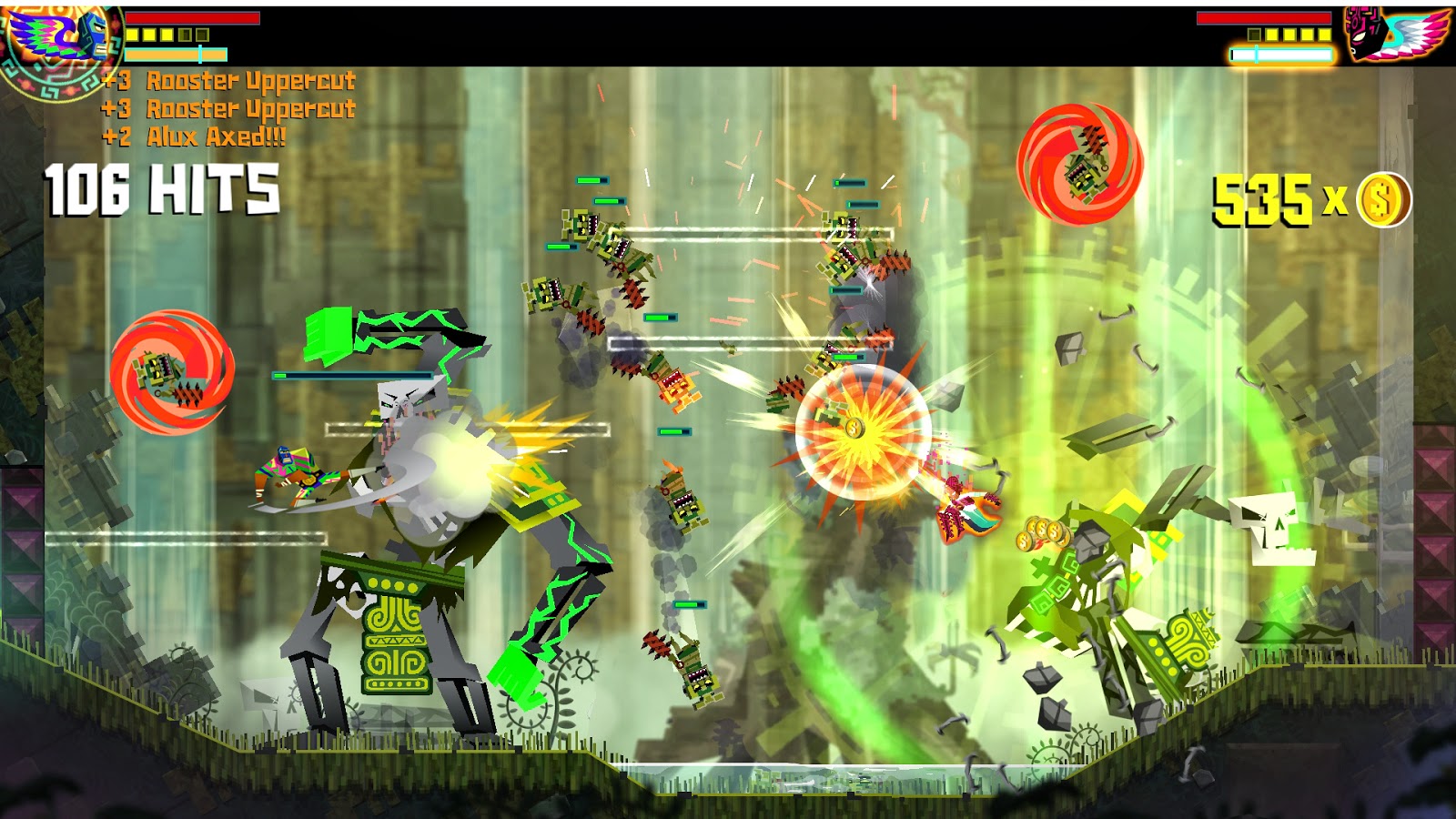 CONCLUSION
"Guacamelee! Super Turbo Championship Edition" is a blast to play. It's fun, funny, challenging, colourful, and it just feels good. This is the second rerelease of an already great game, and by this point, nearly every kink has been ironed out, leaving an impeccable experience that deserves to be played by everyone, Metroidvania fan or not.

I really have to get off my butt and buy this already, don't I?
Top

Stalvern wrote:I really have to get off my butt and buy this already, don't I?

I'm in the same boat. I've been eying it for years but for some reason the goofy art style turned me off. I don't know why, but I have this aversion to game titles that reference food! I actually love guacamole though.
Top

Stalvern wrote:I really have to get off my butt and buy this already, don't I?

Yes you should! Its sequel is even better, as you’ll see once I review it.
Top
Post Reply
4 posts • Page 1 of 1