VGA to HDMI for Dreamcast

I hooked this up to my NTSC PS2 just now. 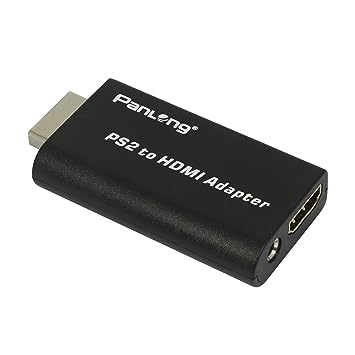 Could it be? Yes! Another episode of "How to Get Better Output From Your Old Consoles! Cheap!!"

The situation this time involved an original Xbox and component cables that looked fine in the living room "alpha setup" but looked sort of crummy on the "beta setup's" 32" TV. Similar problem to the Wii situation (see earlier in this thread,) something about this TVs component inputs is...lacking. What to do? Well...

A handy-dandy component to HDMI adapter! About 20 bucks on Amazon.

Component inputs (including R+L audio) one one side...

HDMI out on the other (plus power input.)

The issue I was having wasn't quite as bad as the Wii's, but it was a similar "ghosting" of the image most noticeable in high contrast areas, and general softness/dullness of the picture.

I'll admit, the differences look minor in these screenshots, but in person it looks much better.

If your setup doesn't have any issues with component inputs, I probably wouldn't bother with this adapter. But, if component inputs look crappy, OR if you don't have component inputs on a newer TV (they seem to be doing away with them,) this might be a viable solution for Xbox, Gamecube, Wii, PS2, or older Xbox 360s.
Top

Cafeman wrote:I'm jealous. Still using crappy composite cables DC to flat screen. I used to use s-video but tv's no longer support it. My TV also doesn't support vga cables. Will look into your solutions!

Well. Since I posted that reply, I ordered the Akura DC VGA to HDMI. I detect no lag, and difference VS composite is startling. Nice crisp picture, bold colors. It has made me replay a bunch of DC games.

I've been playing GCN games via Wii with Component, and the Wii's picture is softer than the DC using Akura, but still not as bad a dreadful RCA composite cables. I prefer the look of the 2 DC Sonic Adventures over the GCN ports.
Top

Cafeman,
Thanks for taking the time to post it. Converters like this can really maximize your Dreamcast enjoyment.
I was lucky enough to get one of the last TVs with VGA input, but I feel like I need something like this waiting in the wings.
VGC
Top

On a completely side note- there was recently released a DCHDMI mod that you can get for your Dreamcast. Unlike these plug and plays, this offers a huge upgrade to the graphics of your Dreamcast. Currently, I'm waiting for my pre-order to get fulfilled (probably in Feb sometime) and then I have to get it modded, but I'm excited to see how this works in the near future.

You can get an idea of what this offers in videos like this: