Two new battle royale games have come out on PS4/XONE/PC fairly recently -- Apex Legends and Realm Royale -- and they're both 100% free to download and play. (Like Fornite, they make money off hoping that players buy cosmetic upgrades in the game). I played both for a couple hours each during the past week. Neither hooked me, but I think they're both good games worth trying that serve completely different purposes.

Apex Legends is the big new battle royale on the scene, and it's stolen a TON of players from Fortnite. The game combines the hero model of shooters like Overwatch (i.e., it has 8+ characters with different classes and skills) into the battle royale model. There is no solo play - every game involves 3-person squads. And the total players per match is 60 rather than 100. The game uses an FPS viewpoint, rather than the 3rd person viewpoint of most battle royale games. Personally I disliked all of these differences -- I prefer playing solo, I prefer TPS view, I prefer 100 other players, etc etc. And I prefer Overwatch, with its small matches, over using heros in a large-scale skirmish. But who I am to complain? Players have spoken and this is the biggest new shooter on the market right now. And, while it doesn't meet my preferences, I have to admit that it's very well polished and plays a very solid FPS game. There's just better options for me.

Realm Royale is a lot like Fortnite, with cartoony graphics and solo, duo, or squad modes, all against 100 other players on a giant map that you parachute down onto. In some ways, I actually like this game more than Fortnite, especially because of these differences: (1) it removes the building element of Fortnite, which I could never get good at; (2) it matches you up to similarly skilled players; and (3) the aiming and shooting is much more forgiving, so I'm better at killing people in this game. I also like the infinite ammo, so I don't have to worry about scouring for ammo. On the downside, the map is smaller than Fortnite, so there's less opportunity for stealthy movement, which is one of my favorite aspects of Fortnite. I think gamers have mostly written off Realm Royale as a subpar Fortnite ripoff, but I actually like it more than Apex Legends. I might even like it more than Fortnite, but too early to say.

Anyone tried either of these?
Top 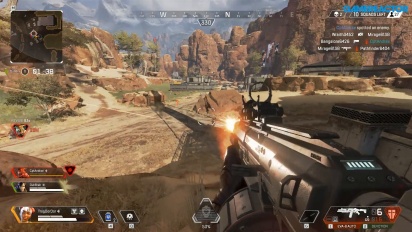 Btw, for those that haven't been following, I've been trying most of the recent battle royale games that come out the past year or so. Based on the time I've spent with these games so far, here is my current ranking of personal preference:

I prefer Fortnite and PUBG most because they allow players to emphasize stealth gameplay, which is my favorite way to play battle royale games (i.e., lay low and hide from people for the first 20 minutes, survive til the finale, and then try to win). And by the way, I am not a big fan of shooters at all, so my recommendations for these games is based more on my enjoyment of the survival aspect of the games. Realm Royale is my favorite as a shooter.
Top

I'm loving the heck out of Apex Legends!

The QOL improvements over the typical formula (especially the communication and callout elements) really elevate it over PUBG for me personally.
Top

I'm loving the heck out of Apex Legends!

The QOL improvements over the typical formula (especially the communication and callout elements) really elevate it over PUBG for me personally.
Top

Never tried Realm Royale but I played Apex and it was okay. Not that great, but I do see it having a more competitive flair than Fortnite.

Darwin Project is really good though. Shame it's not picking up as much as the other BR games.
Top

I am attempting to play Apex Legends. Four matches in so far. It's three person teams, so it's very embarrassing to play with two strangers when I don't know how to play. They will often bring weapons to me because I'm too stupid to find them.

I will say the most impressive thing so far is the firepower. When I shoot, it feels like I'm firing a real gun. I love how loud it is when you are shooting. It does the shooting better than other FPS's I've played recently.

I'm going to keep trying the game. By the way, two facts. This game is basically a spiritual sequel to Titanfall 2. Also, it has a player base of 50 million players according to Wikipedia.
Top

GTS wrote:I am attempting to play Apex Legends. Four matches in so far. It's three person teams, so it's very embarrassing to play with two strangers when I don't know how to play.

It is a bit challenging to get used to at first. But so far other players have been very helpful and one of the upsides is that practically everyone is new to the game because it came out so recently

Retro - thanks for this informative thread! It's useful for those of us who are offline but still curious about what's making waves in the online world.
Top

ptdebate wrote:I'm loving the heck out of Apex Legends!

The QOL improvements over the typical formula (especially the communication and callout elements) really elevate it over PUBG for me personally.

To be fair, I didn't give Apex Legends much of a chance. I played maybe about 4 or 5 rounds, and judged it based on that. To me, the game seems like it wants to encourage firefights, whereas my preference is to avoid fighting until the end. I know I'm in the minority with that, as most gamers I play with online seem intent on rushing headfirst into battle. I think it's a poor strategy, but gamer's attention spans are too short to sit back and let others doing the killing for them. The focus on shooting, and the inability to play solo - where I could use my strategy without annoying my teammates - is part of why Apex Legends doesn't seem right for me.

As for PUBG, viewing it objectively, it's probably towards the bottom of the available battle royale games. All these games owe their lives to PUBG, but they've also improved drastically on the formula, leaving PUBG outdated. So why do I put PUBG as my personal #2? Because the maps are HUGEEE - by far the biggest of any battle royale game - which allows the stealth & exploration gameplay to really shine. And again, that's my preferred way to play, so that's why I enjoy PUBG. I bet that, to most players, the huge maps are a negative because it reduces combat. As for shooting.. well, I probably killed 5 or less players total in my nearly 10 hours of playing PUBG (yes, you read that right, I'm that bad at killing) -- partially because I completely suck at shooting, and partially because my stealth approach allows me to easily survive into the Top 10, at which point I'm facing much better players than me.
Top
Post Reply
11 posts