Good question! Never really thought about it before...

Every source I see on the Internet (which, of course, is never wrong about anything

) spells it as two words: After Burner. Myself, I like to spell it as one word, but that doesn't make it right. I always though of the title as a compound word like OutRun, though I see now that OutRun is often spelled as two words, too: Out Run. Not sure why OutRun gets the intercap treatment and After Burner doesn't. I've never written it that way before now, but I rather like the look of "AfterBurner," while I think "Outrun" looks a little strange by comparison without the capital "R." Huh.

Maybe I'm thinking about this too much. Short answer: it's two words!
Top

Arcade original does it this way. 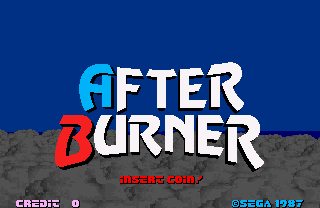 Grammatically/technically, the aircraft jet engine component that injects raw jet fuel into the jet nozzle exhaust of a military jet engine to increase thrust is spelled as a single word.

But it's a pretty long word for the title screen during the attract mode of a 4:3 arcade game, so I can see why Sega did it this way. That said, it will always be Afterburner (And Outrun) to me.
Top
Post Reply
12 posts