Check out my latest special and let me know what you think:
https://videogamecritic.com/extras/art/odd2_art.htm

Would you believe I put together this entire thing this afternoon?
Top

Wonderful page, although describing your own commentary as "witty" is a bit presumptuous. I also have to take issue with the Conquest of the World description – it doesn't have "several futuristic vehicles including a tank, ship, and jet"; it has a tank, a ship, and a jet, period.

Surprised I haven't gotten more feedback about this page.

I noticed one of the boxes featured still had a pricetag, which I think it pretty neat.
Maybe I should make a "Price Tag Special" which shows all my boxes that still have price tags. That might be interesting.
Top

I thoroughly enjoyed this! The O2 box art was intense for sure.

Glad you enjoyed that!
If I had the Timelord box I'm sure I would have included it. Maybe part 2?
Top

Great read. I picked up an Odyssey 2 at a yard sale in the 90's, not really knowing what it was. Honestly, I never heard of it back in the day. Anyway, after playing some of the games I believe I quickly threw it out. Nonetheless, you can't beat the box art, which is really cool. I loved how back in the day they had to kind of set your mind up for what they were trying to convey in the game via box art. Cool stuff. Price tags? Leave them on. That is part of the charm.
Top

Never had or played the Odyssey, but interesting stuff nonetheless. I am a bit of a nerd for box art analysis and stuff, especially differences between regions. Got any more planned for different systems?
Top

Would you believe I put together this entire thing this afternoon?

I LOVE this article.

I was an O2 kid. When I was like 13 years old, my older brother went to Myrtle Beach for spring break. My Mom told him he had to bring me back a souvenir. I either gave him or he took the Pick Axe Pete box with him. What he brought back I have kept for nearly 40 years now. See attached.

Really enjoyed this one too!

(If I'm a bit late to the party, it's because I didn't realize what it was at first -- plus the thread didn't show up in the Hot Topics sidebar until today, I think?)

They really did go all-out on the box art for a lot of Odyssey² games, and the look of them still holds up today. A pity that the games themselves weren't always worthy of that effort, but at least some of them were.

War of Nerves sounds really interesting! I hope that one gets a review soon. And Conquest of the World really isn't that complicated -- its bark is much worse than its bite -- it's really just a bunch of minigames held together by a relatively flimsy board game concept. Give it a couple hours and you'll have it sorted out.

The Great Wall Street Fortune Hunt -- the third and final board game hybrid for the Odyssey² -- also has kinda bonkers artwork: 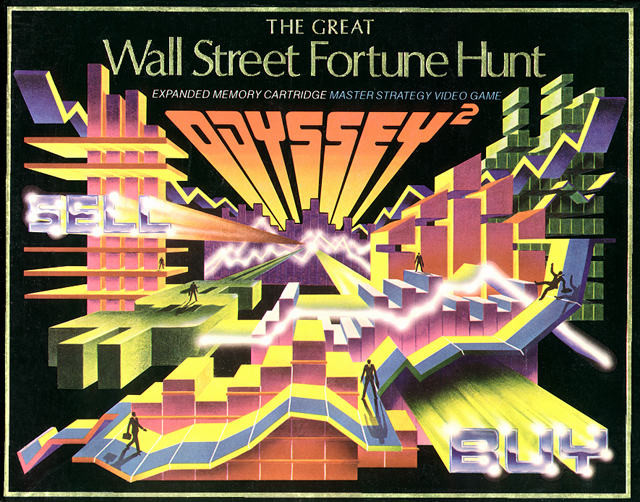 TheEagleXIII wrote:Never had or played the Odyssey, but interesting stuff nonetheless. I am a bit of a nerd for box art analysis and stuff, especially differences between regions. Got any more planned for different systems?

I'm open to suggestions about what my next one should be about.

As for War of Nerves, I have a review written but I know a need a second player to do this justice. So I'm keeping the review on hold, on the off-chance I see my friends again in a non-zombie form.
Top
Post Reply
20 posts