I actually did some research and all it did was support my views. The reason 3rd party developers didn’t make games for the Saturn was because they realized right away that it was impossible to make 3d games for it. There was no way to have a game in an open world. And there are no games anyone did for the Saturn that have that kind of 3d. The argument that developers needed more time is hysterical. They had huge teams with money behind them trying to do whatever they could to get it to be able to do 3d and the best they could do was Quake.
I read that the lead programmer of Quake said it was excruciating to finish that game and get it to work on the Saturn. And that’s just 3d confined to very narrow small rooms. And the enemies were sprites. It’s a joke. That was the most the Saturn was capable of whether you disagree with me or not.
I obviously know you’re going to counter with Sonic Jam. That world was small and there were no enemies.
It’s not just making a 3d world. You need enemies with AI and to make the game fun. The Saturn was incapable of making even that game have enemies.
Top

Again, haven't played it, but would Panzer Dragoon Saga count? I mean, it is a 3D RPG.

Also, Shenmue was originally in development for Saturn.
Top

Well an issue worth pointing out is that programming for multi CPU systems was not standard expected expertise for a gaming developer. A job ad saying "must have minimum 4 years experience working on multi CPU systems" would yield few if any applicants. It is inconceivable to me, given Sega's model 1 and model 2 hardware, years of top drawer arcade and console experience, that the Saturn could not even do model 1 games with the same fidelity. Begs the question how could they f**k up the Saturn so much? Anyway they did. Sony with their single CPU and a coprocessor for 3D hardware acceleration was not only a model that PC's adopted it paved the way for console design. Even the N64 with it's botched hybrid 64bit ALU and 32bit bus was infinitely more streamlined that the Saturn. Even with the horrible tools Nintendo gave developers the console was streamlined enough so teams like Rare and Factor 5 could push better and more expansive graphical content. The Saturn - multi CPU system, crap development tools (even Sega's own developers struggled immensely with the hardware), competing against a new (to gaming) but nonetheless corporate giant in Sony it is not hard to see how it failed. The Saturn's crummy 3D graphics are just a testament to that failure. The N64 was not much better though in the 3D department, not when stacked against shiny titles like Omega Boost and Legacy of Kain that were on the PS1 ....

That said, there are those that suggest Saturn was not fully utilized. Shenmue demo seemed to indicate an enormous untapped potential but demo's do not include enemy AI or UI so perhaps should not count. Dead or Alive remains the most impressive Saturn title and it looks as good as, if not better, than the PS1 game. However, this is a 3D polygon fighter and the Saturn could draw a whole bunch of polygons like the PS1.

FTFY. N64 is too poor to act as a marker indicating an upper bound.
Top

Saturn was like a poor's man Playstation, those empty 3D aerial view of Sonic Jam doesn't prove anything, it does not hold a candle to Spyro, Banjo or Mario 64, neither does the clunky Sonic R. One could say that the Saturn was a 2D powerhouse, but things did not look good for the console when the SNES also could run Street Fighter Alpha 2 and the Genesis also could run Sonic 3D Blast. Saturn was a very middle of the road console, barely could run Daytona and Tomb Raider was very clunk on it, but Panzeer Dragoon still a great game.
Top

Hagane wrote:Saturn was like a poor's man Playstation, those empty 3D aerial view of Sonic Jam doesn't prove anything, it does not hold a candle to Spyro, Banjo or Mario 64, neither does the clunky Sonic R. One could say that the Saturn was a 2D powerhouse, but things did not look good for the console when the SNES also could run Street Fighter Alpha 2 and the Genesis also could run Sonic 3D Blast. Saturn was a very middle of the road console, barely could run Daytona and Tomb Raider was very clunk on it, but Panzeer Dragoon still a great game.

I beg to differ, Tomb Raider on Saturn still ran better than most 3D games of the time, at its worst it runs at about the same framerate as Panzer Dragoon's best, and Saturn TR has a few added quirks compared to PS1 TR like a farther draw distance and water distorsion. Even with framerate drops, Saturn TR is far from being clunk. Inferior to PS1? Sure (textures were worse at long distances, lower average framerate, I prefer the gouraud shading of the Saturn but that's an acquired taste), in the same way that early & mid-gen PS3 games were inferior to 360, and even then certainly not to the extent of a PS3 Bayonetta situation. It was also rushed a little more with the timed exclusive thing, so that probably didn't help either.

Also, taking Street Fighter Alpha 2 SNES as an example is like saying that the Dreamcast wasn't an impressive console because the PS1 & N64 could also run Rayman 2. Except somehow even worse because SFA 2 on SNES is super stripped down too, doesn't run well, misses tons of animation frames, has loading ingame each time there's a K.O and each time the round just starts, etc. Lots of "demakes" have already been made, it's not uncommon. And 3D Blast is mostly just a remaster, it wasn't a project meant to show the power of the Saturn anyway.

Saturn development just never reached its peak, there were impressive games *for the time* on Saturn but by the time Spyro & Banjo released, the Saturn was already considered a bomb here and on its way out. It never had the time or support to get those kinds of games.
Imagine if the PS3 only had 3 years on the market with a quarter of the support, of course we would've believed the PS3 was weaker than the 360, it would've never had its Killzone & Uncharted sequels, its Gran Turismo 5, its Metal Gear Solid 4, and the ports would've probably gotten even worse by the end of its life.
Top

I've always said what if the PS3 got discontinued after the first year or so. Obviously it never would've happened. But it would've been viewed as a failure. I remember a few years ago talking about the Jaguar's capabilities and getting laughed out of the thread. Now we're talking about the Saturn, which couldn't even do 3d and it's like it's this magic system with 3d greatness waiting to get uncovered. Throw Panzer Dragoon and a couple not so devastatingly amazing "3d games" like Tomb Raider and Quake out the window for a second. You're left with nothing. The system couldn't do 3d. Period. It's a joke. It's like since it's not 1997 anymore people forget how much of a joke it was. Again, show me a 3d game in an open world.
Top

jon wrote:. Again, show me a 3d game in an open world.

You've already been shown a 3d open world on an Amiga 500, and one running on a DS with less polygons than a Saturn is capable of rendering. There are also examples of the form on the GBA and 3DO multiplayer.

Let me know when you've finally found a real answer to all of this, because otherwise, you're just acknowledging that you didn't think too hard about your effort to derail the topic.
Top

What is open world anyway? If it is merely a 3D playing field with the player able to direct the character or object in any direction on an x-y plane then Tomb Raider and 3D platformers would indeed fit that category.

Croc below is a platformer on the Saturn that was pretty much what you expect from this genre in the PS1/N64 days. It is a poor mans Spyro but is an example of the genre running on the Saturn.

Here it is vs PS1

The issue is, proper 3D (in a sense of x-y-z positioning requiring numerous Matrix transforms) titles are absent on the Saturn. Does not mean Saturn cannot do it but a claim without producing evidence, irrespective of credulity, is still just a claim. I personally believe the Saturn could anything the PS1 could - just lob off that 10 or 20%. Irrespective it is entirely possible the Saturn just does not have the math tools to perform complex calculations involving Matrix Transforms or Tensor products.


My perspective that the 5th generation of consoles is by far the worst generation of the lot. That some classics like Symphony of the Night came out and some nice 2D brawlers like SF Alpha is remarkable - as if the developers were issuing an apology to gamers for releasing turd after turd.
Top

I’ve said a million times. There are no games on the Saturn that have 3d worlds that aren’t confined to narrow spaces. There are no games with an open world like Super Mario 64, or Twisted Metal or Goldeneye. These are just examples. The Saturn couldn’t even pull off a fully 3d game with worlds much smaller than those games. They couldn’t for example do a 3d game in an open world one third as big as Super Mario 64. The Saturn’s 3d capabilities are a joke. All you do is keep sending me games with very narrow places which further supports my points. Show me a game like Mario 64. It can even be much smaller too. Just show me a game without very small narrow environments. You can’t.
How about a 3d stage one third as big as the bigger stages from Twisted Metal.
Top

jon wrote:Show me a game like Mario 64. It can even be much smaller too. Just show me a game without very small narrow environments. You can’t.

Already did. Your counterargument was "Sonic games don't count!"

And I understand. Sonic R and Sonic Jam (and the Nights on foot engine) wreck your argument, and you're desperate to keep this going. But you forgot to say why anyone should take you seriously, after you're reduced to that level? 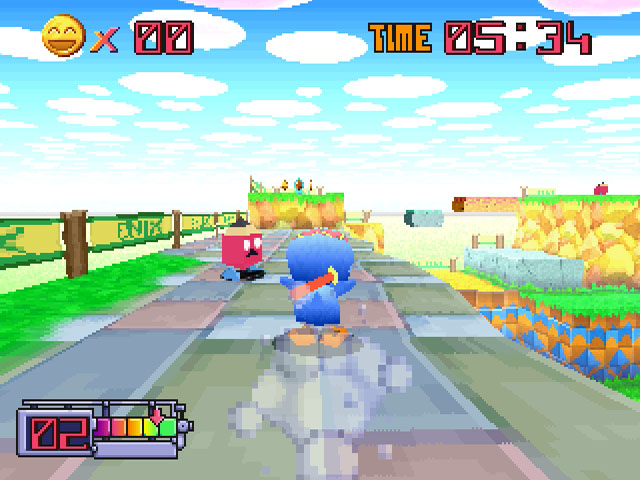 Should probably include this one, too.