I hear there is a new Battletoads out for the Xbox One, featuring three-player "couch" co-op.
It's currently only available via download, but I wonder if they might release it on physical media if it's popular enough?
Top

First off, thanks for the heads up. I don't own an Xbox One, but I'm still interested in this new game. Early previews were warning that the gameplay had issues, but it looks like Rare shored things up a bit. It currently has a 71% on Metacritic, which isn't great, but at least it sounds like a decent enough game for fans.

As for a physical release, I wish they would, but my bet is no. We all know the Battletoads name here, but I don't think the average gamer today does. So it's more of a niche game, which explains the digital release and $20 price tag, rather than getting a retail release by Microsoft. Normally Battletoads is the type of game that a "limited run" publisher (like LRG) would want to pick up. But there's two problems: (#1) for whatever reason, the "limited run" publishers only seem to do PS4 and Switch games [no one seems to publish Xbox versions.. anyone know why?], and (#2) it's a Rare and Xbox Game Studios collaboration [not an indie release], so they would have physically published it themselves if they had that intent.. since they're a major first-party studio, they don't need an indie publisher. As a Microsoft game, that also means it won't appear on Switch or PS4.

Sometimes a game does so well with digital sales that the company is finally compelled to release it physically -- for example, Rocket League. But I don't see that happening with Battletoads. Look at Cuphead on Xbox, which got a lot more sales/attention than Battletoads but never saw a physical release. Some minor good news though: if you're just hesitant to buy directly on your Xbox, you can buy this digital code for Battletoads from Amazon:

One look at what they did to the Dark Queen pretty much sums up the game. 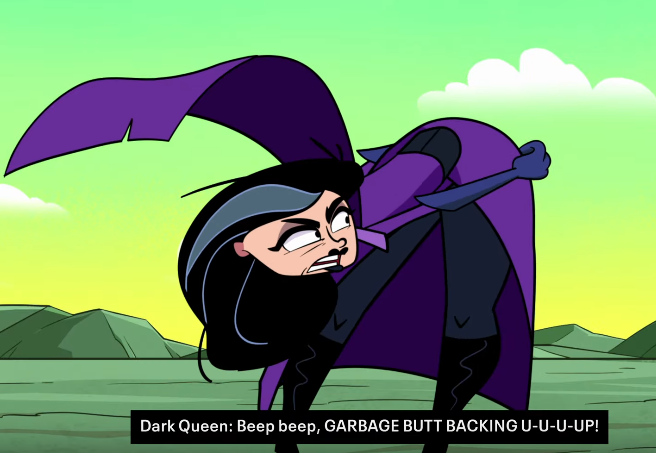 No game that tries this hard to rip-off Adult Swim everytime the toads talk, should be this terrified of a woman's boobs. (Or this obsessed with her "garbage butt" - seriously, what she says before this scene is either bad gross-out humor or someone's fetish fuel. Especially after the "Battletoad in a dirty diaper" scene.) And every single stage lasts way too long. Who asked for the Turbo Tunnels to be easier...okay, everyone but me? Still, who wanted it to last longer than it takes to beat some entire NES games?

The flash quality animation is smooth, and the combat engine cathartic, but every stage wears out its welcome, just so the game can claim to have a longer playtime. It feels like a mid-life crisis that missed the entire point.
Top

19 Gb download. How can a 2d game have a 19 Gb download size. Oh well I will have to delete some stuff to play it.
Top

I bought it on PC, but so far it's just too busy for my tastes. I really like Streets of Rage 4, but this game just has so much going on and more complicated controls. It's not bad, and I need to spend more time with it, but a little disappointing.
Top
Post Reply
5 posts • Page 1 of 1