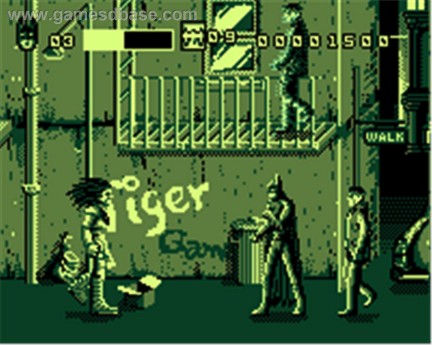 On a system not known for quality platformers, Batman and Robin wins by default. It's a simplistic but mildly enjoyable side-scrolling beat-em-up. You can play the role of either Batman or Robin, although frankly I didn't notice much difference (outside of their appearance). Prior to each stage you select two items from a list of gadgets including a grappling hook, ice blast cape, gas grenades, ice blades, and Bat-a-rangs. These add a little strategy to the rinse-and-repeat gameplay.

As you walk down a city street you're approached by masked freaks with hockey sticks. The scenery is exceptionally detailed with layers of buildings, automobiles, signs, and graffiti. The backdrops look great when you're standing still, but when moving they become a blur. The eye strain becomes even worse in the sewers where much of the screen is intentionally blacked out.

You can walk right up to most goons and deliver two good punches to knock them out. The "thwack!" sound effects ring true, but the rest of the audio falls flat. The happy-go-lucky music sounds like a toy xylophone, and the grunts and groans sound like an adult movie!

Certain enemies have a tendency to remain out of "punching distance", but they can't escape your jump-kicks. I find it interesting how you can actually unleash multiple kicks during a single jump! Also satisfying is hurling projectiles like Bat-a-rangs. They're hard to see on the screen (impossible really) but you can hear them whirling through the air and watch enemies fall. Your grappling hook pulls you up to higher areas like balconies and fire escapes.

The controls could be a little more responsive, and you often get stuck facing the wrong direction. What's more frustrating is how the game sometimes creates an invisible wall and won't let you proceed until you beat up more thugs. Batman and Robin has issues, but I appreciate its good looks, straightforward style, and moderate difficulty. © Copyright 2013 The Video Game Critic. 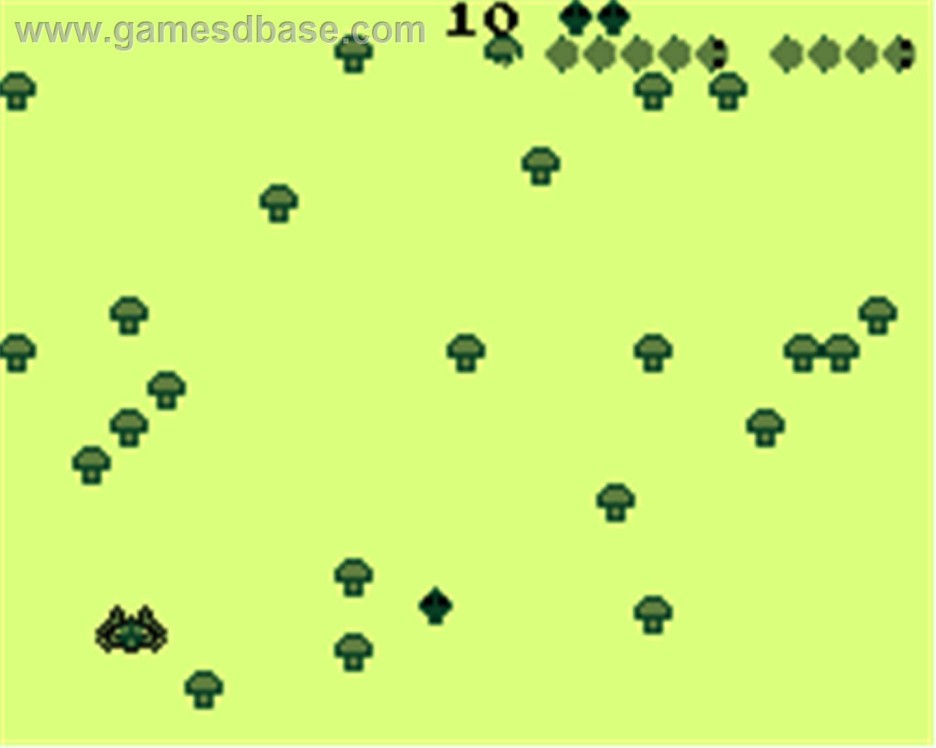 Most games land on the Game.com in a weird, altered state, but this classic bug-shooter arrived pretty much intact. Centipede's simple, 2D style doesn't tax the system so it can retain the same fast pace. In case you're not familiar with the 1980 arcade hit (has it been that long?) the idea is to shoot a centipede that winds its way down a mushroom-laden screen. You'll also need to avoid a hyperactive (and very dangerous) spider that hops around the bottom.

The action is frantic, non-stop, and addictive. The objects are generally well-defined, and the big black spider actually looks hairy! Gross! The centipede itself is a little faint - probably because it's constantly moving. Your cannon is fairly easy to position but naturally lacks the precision of the arcade's trak-ball.

One word of advice: do not try to sneak under the spider because he will crush you. Always keep your distance and only move in for the kill when he's high on the screen. In addition to the classic mode, there's an "updated" mode that renders the bugs differently and incorporates giant mushrooms. It's hardly an improvement and it adds a big, ugly smudge to the bottom of the screen. Just stick with the default classic mode and you'll have a good time. © Copyright 2013 The Video Game Critic. 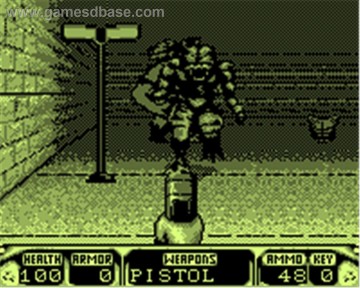 So... who thought this was a good idea? The Game.com system can barely even render a 2D side-scroller, much less a 3D first-person shooter! How did the developers pull it off? Well, they faked it. At first glance Duke Nukem appears to be a first-person shooter, but you can only move forward and strafe. No, you can't change directions and you can't look around.

In addition to this constricted movement you must also contend with a truly bizarre control scheme. There are three shoot buttons that let you aim forward, slightly left, and slightly right. Wait what?! If this weirdness is meant to compensate for the lack of turning, it's a small consolation. The remaining button is used to select weapons and open doors. Overlapping monsters resemble ugly inkblots on the screen, and mowing them down isn't very satisfying.

The strongest aspect of the game is the digitized audio, which incorporates gunshots, howls, and even vocal quips like "Damn I'm good!" The stages are selectable, but don't expect much variety. This Duke Nukem is a mere shadow of the original PC game, but the fact that this is even a thing is kind of remarkable. You'll come for the first-person shooting action but play for the morbid curiosity. © Copyright 2014 The Video Game Critic. 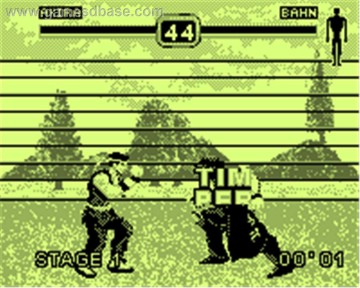 In the late 90's 3D fighters were all the rage, and no system could handle them better than the Game.com. I'm being facetious. This game is crap. You get eight characters from the Virtua Fighter 2 and Fighting Vipers series. The title implies an all-star lineup, but the fighters aren't exactly household names. Lion, Bahn, Candy, Mahler? Who are these people?!

The characters look detailed but indistinct - as if they're penciled on paper that's been erased too much. When they move, they become slow motion blurs. It's hard to tell what's going on, and you often end up facing the wrong direction. All bouts take place in a "ring", which means the backgrounds are marred by ugly horizontal lines. You can make out some buildings in the distance, but the scenery is so faint it might as well not even be there.

The buttons let you punch, kick, block, and dodge, but I was pretty much able to beat everybody with continuous leg sweeps. Apparently special moves do exist, although they are not listed in the manual. The only way you'd know if one happened is if one fighter suddenly loses a huge chunk of life. The "survival mode" had inexplicably pitted me against a car which promptly ran my ass over. Fighters MegaMix on the Game.com will make you realize how you've been taking your Saturn for granted for all these years. © Copyright 2013 The Video Game Critic. 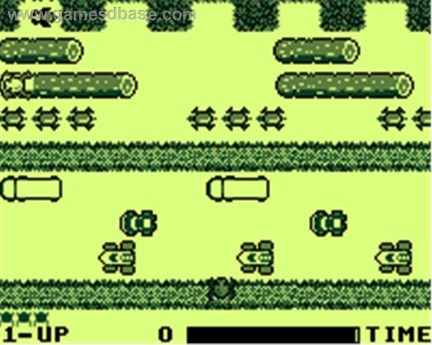 It's hard to screw up a time-honored classic like Frogger - even on the Game.com! The gameplay is simple, methodical, and pleasant. This is a surprisingly faithful translation of the 1981 arcade hit. First you guide your oversized amphibian across a five-lane highway while avoiding a variety of vehicles. If you survive, your next goal is to hop between logs on a stream to reach the riverbank. Why would a frog want to go through so much effort? To earn crazy points and beat that high score, silly!

The snake is the most dangerous part of the game, since touching any part of its body spells instant death. It doesn't help that he tends to blend into the grassy strip between the street and stream. Frogger's controls are responsive and forgiving, so even if you catch the edge of a cove, it won't kill you.

The game's one technical flaw occurs when you rescue the hot lady frog, at which time substantial slowdown rears its ugly head. The Game.com system isn't known for its audio prowess, but this game manages to deliver harmonized renditions of Frogger's playful tunes. As with Centipede, you get an "updated variation" with slightly enhanced visuals but the same gameplay. Easy-going and fun, Frogger is probably the most playable title you can find for the Game.com. © Copyright 2014 The Video Game Critic. 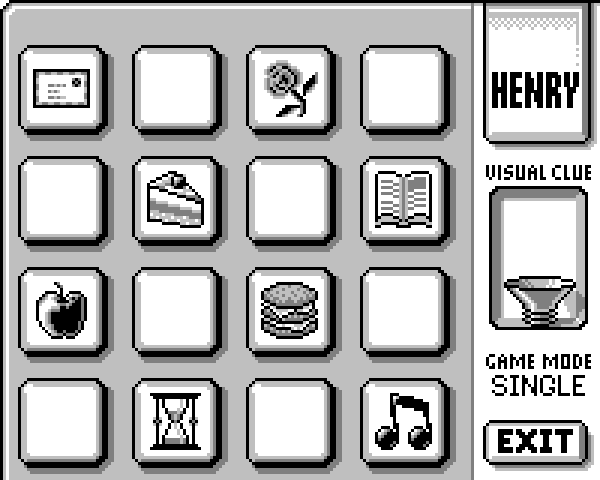 I picked up Henry in a desperate attempt to complete my collection of Tiger Game.com reviews. It's little more than a glorified memory match game played on a 4x4 grid. I've played my share of match-the-square games before but Henry has the added twist of audio cues. I have to admit the sound effects are clear and voices easy to understand. You need to complete a "row" of correct guesses to win, kind of like a Memory/Tic-Tac-Toe hybrid that nobody ever asked for.

In single-player mode you're competing against a CPU player named Henry, but the user interface is poorly designed. When the screen says "Player one your turn", it doesn't respond until you tap the box that says "Henry". That makes no sense. Once you get the hang of it the game is mildly amusing.

Adding challenge (and confusion) is the fact that the sounds aren't usually related to the symbols on the squares. The phone symbol may be accompanied by a cat meow and a book might sound like an elephant. The images and sounds are randomized for each game, so it's confusing to play consecutive games. With no score, one skill level, and minimal challenge, Henry is a highly unnecessary addition to any Game.com collection. © Copyright 2018 The Video Game Critic.