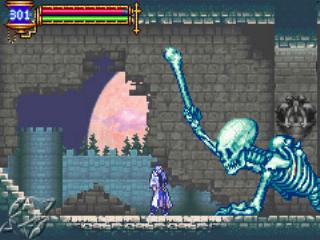 Damn! I should have played this game a long time ago, because the other two Castlevania games for the Gameboy Advance suck by comparison. Do the words "Best Gameboy game ever" mean anything to you?? Aria of Sorrow achieves a perfect balance of challenge and playability, with phenomenal graphics and a top-notch symphonic musical score.

Its gameplay is your standard Castlevania hack-n-slash platform jumping action, but this chapter is far more forgiving and has ample save points (dare I call it "easy"?) Indeed, this is the first Castlevania game I've played where I did not reach some hopeless point of frustration.

The storyline involves a lunar eclipse in 2035 that causes two people to be transported to Dracula's castle, where a "new evil" has assumed the deceased vampire's powers. Here lies my main complaint: is the lead character ("Soma Cruz") a guy or girl? If there's one thing I can't stand, it's androgynous characters. Also, the corny dialogue is more akin to two chicks chatting at the mall as opposed to warriors on an epic quest.

Aria's graphics are brighter and easier to discern than "dark" titles like Circle of the Moon. Besides the usual suspects, you encounter witches that transform into cats, killer dolls, and waltzing ghosts (a la Disney's Haunted Mansion). Bosses include the grotesque "Creaking skull" (a giant Skeleton torso) and the "Headhunter" who swaps heads to assume different identities.

I like how when you attack a monster, the damage points are displayed right on the screen. Acquiring the abilities of defeated foes is a cool feature, and I even enjoyed perusing the "enemy database". Overall, Aria of Sorrow is the most polished, well-rounded Castlevania adventure to date - including Symphony of the Night (Playstation). © Copyright 2005 The Video Game Critic. 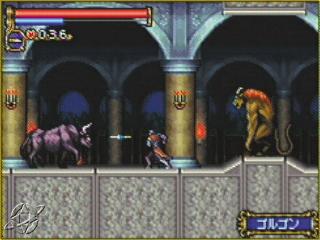 As the first Castlevania title available for the Gameboy Advance, Circle of the Moon is flawed and highly overrated. Yes, the visuals are quite nice with its gothic scenery and imaginative undead creatures, but the stage designs are a nightmare. Each has one or more huge open areas with diagonal "stairways" running up each wall. While these central corridors often branch out to other zones, they are awfully repetitious.

After aimlessly hopping around several of these, you'll find yourself pining for the more linear gameplay of the NES Castlevanias. Another flaw is the poor control which makes it hard to jump and attack at the same time! The annoying first stage is crawling with poisonous "worms" that are all but impossible to avoid (hint: slide).

Circle of the Moon's save points seem randomly placed. The first time I defeated the first boss (which was surprisingly hard), I frantically searched for a save point, but there were none in the vicinity, and I soon succumbed to a frustrating death. The gameplay mechanics are standard Castlevania, except now you can collect "cards" and combine them for various effects.

In terms of presentation, Circle of Moon is high quality as you might expect. A gorgeous full moon shines through the windows of the castle and outstanding organ music plays a haunting refrain. Sometimes when you look out the windows you can get a glimpse of a boss you'll eventually encounter.

Circle of the Moon should have been a slam-dunk, but it's unbalanced, lousy stage designs suck the enjoyment right out of it. Fortunately its shortcomings were addressed in the two subsequent Castlevania games for the Gameboy Advance. © Copyright 2004 The Video Game Critic. 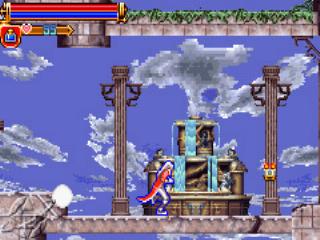 It took some time to win me over, but Harmony of Dissonance is one of the more enjoyable Castlevania games I've experienced. It's very similar to the highly-acclaimed Symphony of the Night (Playstation), and every bit as good. The graphics are gorgeous as you would expect, and the music is amazing (for a handheld system). You assume the role of a vampire hunter exploring a huge, mysterious castle - nothing new there.

Armed with your trusty whip, you'll acquire all sorts of weapons, spellbooks, and artifacts as you progress. Typical of Castlevania, there are plenty of memorable animations, like lizard men lunging with their swords, barely missing you with the tips of their blades. Skeletons raise their dukes to taunt you. Subtle details like a floating eyeball lingering behind a curtain or a corpse hanging in the background are examples of the game's rich visuals.

Each stage is a work of art, decorated with ornate architecture and huge sculptures. Initially I got lost in the endless corridors and stairways, but once I obtained the map, the gameplay improved dramatically. The more powers you amass, the more enjoyable Harmony of Dissonance becomes. This game is a winner, and it's one of three Castlevania games available for the Game Boy Advance. © Copyright 2003 The Video Game Critic. 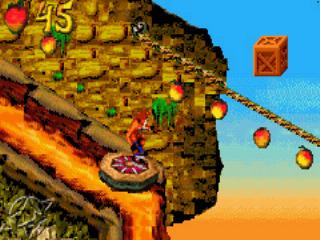 As the second Bandicoot game for the Gameboy Advance, Entranced succeeds on some fronts but fails on others. On the positive side, Entranced is a lot quicker to get up and running compared to the first game where you needed to wade through endless intro screens. The action itself is the same fun side-scrolling mayhem you'd expect, but this edition features fresh new stages including a remodeled jungle that's less lush and more open. There are also Prince of Persia-inspired stages and Super Monkey Ball-inspired "Atlasphere" sequences.

While the new scenery is nice, the game has some problems. The position of your large Bandicoot sometimes makes it hard to avoid jumping right into lava or other dangers. The skinny natives you encounter tend to be hard to discern on the small screen, and sometimes I even ran right smack into them. The vine-climbing controls are poorly devised and nearly impossible to navigate. Had the developers possessed any knowledge whatsoever of old school gaming, they would have adopted the same mechanics that Donkey Kong Junior perfected over 20 years ago! Sheesh!

And then there are the "Atlasphere" stages - the one bright spot in Wrath of Cortex (PS2, Xbox). Unfortunately, these ball-rolling stages do not translate well to the Gameboy, thanks to lousy collision detection and bizarre physics. The 3D Jaws-inspired water skiing stages feature remarkable water effects, but don't play as well as they look. Entranced has its problems, but if nothing else, it offers some fresh and exciting new environments for this Bandicoot to roam. Let's face it, there's a Bandicoot in all of us, and he must be unleashed. © Copyright 2005 The Video Game Critic.

"Oh how I love me some Bandicoot action!" Those profound words ring as true today as they did 10 years ago. And who would have expected that the Gameboy Advance could duplicate the same Crash Bandicoot action seen in the old Playstation games? These stages look like they were practically lifted straight from those classic titles! The original three Crash Bandicoot games were a combination of 3D "into the screen" action and 2D side scrolling stages.

Huge Adventure consists of mainly side-scrolling stages, although some well-executed 3D "chase" sequences are included as well. This is the kind of old-school Bandicoot action I thrive on, and the nostalgia factor is through the roof! Getting started however, can be a chore. You'll have to sit through about five annoying logo screens, and each is animated. That [expletive] has got to stop right now!

After that, you have to page through the ridiculous intro detailing how the evil Cortex has shrunk the world to the size of the grapefruit. Stop him? I think it's a little late for that! You'll be tapping buttons like there's no tomorrow just to get the game started, only to accidentally select "New Game" (instead of Load) on the main screen. When will the hurting stop?!

Should you persevere through all of that nonsense, you'll discover that Huge Adventure is quite good. The scenery consists of dense jungles, mysterious ruins, and even shipwrecks - what more could you want? With a few exceptions, the controls are finely tuned, and the new double jump is superior to the clumsy slide-jump used in old Crash games. The bongo-driven musical score sounds fantastic.

Naturally, I do have a few reservations. For one thing, the stages are so familiar that the word "rehash" crossed my mind a few times (not that young kids will notice). Also, the snow and swimming stages, which held great novelty value in the original games, tend to bog down the action. Control in the snow stages sucks, and the swimming stages are just plain slow. Still, brimming with nostalgia and irresistibly fun, Crash Bandicoot's Huge Adventure is one worth undertaking. © Copyright 2005 The Video Game Critic. 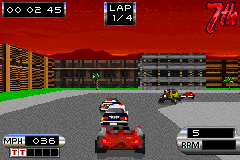 There was always something appealing about the shallow arcade fun of the Cruis'n series, and that something is conspicuously missing from Cruis'n Velocity. Instead of blazing through colorful stages you're racing boxy little cars around dull, angular tracks. You only get two cars and two tracks from the outset, and the eye candy is basically non-existent.

A girl shouts "Las Vegas is exciting!" before the first race, but you'd never know from the bland graphics. Who in his right mind would render Las Vegas as a bunch of gray and brown buildings? The other tracks aren't much better. Mars (as in "the planet") is a bunch of tunnels and red canyons, and the Ireland track is best described as "pixel soup". You can't even tell where you're going in that one.

The racing action is certainly challenging - I'll give it that much. Other cars will block you from passing and when you hit one you'll hear crunching metal before practically grinding to a halt. The lack of a power-slide is glaring considering how many hairpin turns there are. You've got a limited number of turbo boosts, but double-tapping the accelerator to use them is problematic. It's too easy to accidentally blow through them, and you'll want to keep at least one handy for that final lap. The more I played Velocity the more I realized this wasn't a Cruis'n game at all. Velocity is just a tech demo bent on proving the Game Boy Advance can handle 3D graphics. I'm not impressed. © Copyright 2020 The Video Game Critic.