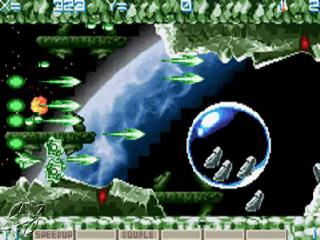 Boy oh boy, I had forgotten just how ridiculously hard these Gradius games are! For those who aren't familiar with the series, Gradius is a line of side-scrolling space shooters that became popular in the mid-80s. This version retains the basic gameplay and extreme difficulty of the original game. Galaxies tosses you into the fire from the get-go. Level one is nearly insurmountable with its narrow caverns and missiles approaching from all directions. Like all Gradius titles, you can collect pods and redeem them for power-ups. It's really important to get off to a good start and load up on weapons early. Galaxies also includes an "auto upgrade" feature that automatically performs your upgrades so you can concentrate on the business at hand. The graphics and sound here are nothing fancy, but the lack of flash makes it easier to dodge projectiles and navigate caverns. As a big fan of the series, I really enjoyed Gradius Galaxies despite the frustration it inevitably brings. This is a shooter lover's shooter - an extreme challenge of the highest magnitude. © Copyright 2003 The Video Game Critic.
Find Gradius Galaxies on eBay, Amazon, YouTube
Copy link to this review
1 player
If you like this game, try: Gradius III And IV (Playstation 2),
Gradius Collection (PSP), Caverns of Mars (Atari XEGS),
Gradius III (Super Nintendo), Parodius Portable Collection (Japan) (PSP)
Guilty Gear Advance
Grade: F
Publisher: Sammy (2002)
Reviewed: 2004/1/19
Rating: Teen 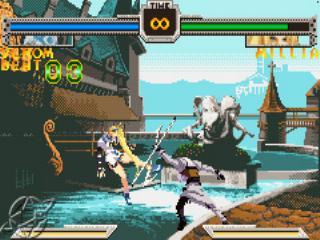 I really enjoyed the Playstation 2 (PS2) Guilty Gear games, but this portable edition is a joke. The PS2 versions featured large, well-animated characters and gorgeous backgrounds, but you'll get none of that here. The motley crew of characters is the same, including the hair-fighting Millia Rage, hard-rocking Axel Low, hulking Potemkin, bag-headed Faust, and the aptly named Sol Badguy. Unfortunately, the fighters are small, and their animation is so rough that certain moves look more like glitches in the game. The fantasy backgrounds are completely static and have a washed-out look. The music is totally unappealing, and the distorted voice samples sound like static. But the worst aspect is the game's low difficulty, which is surprising considering how tough the PS2 versions are. The normal skill level is laughably easy, and even at "very hard" I could dispatch my opponents easily with minimal technique required. Upon winning the arcade mode, you view a text ending, and are then forced to sit through boring credits - some reward! Guilty Gear Advance does save high scores, and you can link up with a friend, but what's the point, really? © Copyright 2004 The Video Game Critic.
Find Guilty Gear Advance on eBay, Amazon, YouTube
Copy link to this review
1 or 2 players
If you like this game, try: Guilty Gear X2 Reload (Xbox),
Guilty Gear (Playstation), Guilty Gear Dust Strikers (Nintendo DS),
Guilty Gear X (Playstation 2), Guilty Gear XX Accent Core (Playstation 2)
Gunstar Super Heroes
Grade: B
Publisher: Sega (2005)
Reviewed: 2006/1/13 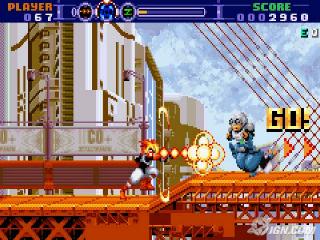 The original Gunstar Heroes appeared on the Sega Genesis in 1993, and over the years a dedicated following has elevated it to classic status. As a big fan who owned Gunstar "back in the day", I could hardly wait to get my hands on this Gameboy Advance sequel. But much to my surprise, this is more of a remake than a sequel. For those who've never played Gunstar Heroes before, its frenetic, rapid-fire style is a lot like Metal Slug, but much faster. Gunstar Super Heroes kicks off with flashbacks to the original game, complete with the same bad dialogue ("No... the Earth... under one person's power...). After a short intro level, you can select from four familiar scenarios, including the village, airship, mineshaft, and oversized board game. The stages have been visually overhauled almost beyond recognition, and new mini-games have been incorporated. True to the Gunstar legacy, there are some truly wacked-out bosses, including a giant gopher that's periodically run over by a passing truck. The character sprites are significantly larger and more detailed than those of the original game, but their size seems to limit the amount of on-screen mayhem. The run-and-gun action is still fun, but seems more tame. You can switch between three weapons on the fly, but you can't combine them. The developer makes heavy use of the GBA's rotation capabilities, with stages that feature spinning planes and rotating a mazes. Unfortunately, these stages look better than they play. Even a new overhead shooter sequence falls flat due to your oversized ship and limited real estate. I could also do without all of the boring dialogue between stages. Does an action game like this really need dialogue? Definitely not! I will give this game kudos for its high score management, which saves high scores and initials per stage. In the final analysis, Gunstar Super Heroes manages to stay true to the original game, but like most sequels, it can't quite match the original. © Copyright 2006 The Video Game Critic.
Find Gunstar Super Heroes on eBay, Amazon, YouTube, Forums
Copy link to this review
1 player
If you like this game, try: Metal Slug Advance (Game Boy Advance),
Metal Slug 7 (Nintendo DS), Metal Slug (MVS) (Neo Geo),
Metal Slug 2 (CD) (Neo Geo), Gunstar Heroes (Genesis)
High Heat Major League Baseball 2003
Grade: D
Publisher: 3DO (2002)
Reviewed: 2003/8/12 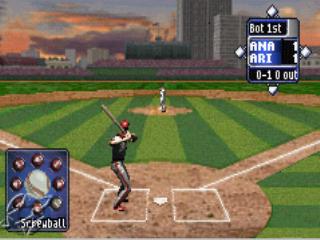 Man, I didn't realize how good Baseball Advance was until I played High Heat! This game has some serious problems. For starters, the fielders and balls are very tiny, which is not conducive to a hand-held game! Even the behind-the-batter view looks very distant. The pitching and batting controls are okay, but I hate how you have to "cue" the pitcher to throw the ball when you're batting. Once the ball is hit, fielders can run, catch, and throw, but can't jump or dive. The CPU-controlled fielders are idiotic, often missing easy chances to throw men out or turn double plays. High Heat does have all the major league teams and a wealth of options. The ballparks look pretty good, but the players all look identical. High Heat's audio is horrible. The intro screen's blaring rock music will make you cringe, and during the game the crowd is strangely silent, only reacting to long fly balls. High Heat is long on options but short on gameplay, so I'd recommend you stick with Baseball Advance. © Copyright 2003 The Video Game Critic.
Find High Heat Major League Baseball 2003 on eBay, Amazon, YouTube
Copy link to this review
1 or 2 players
If you like this game, try: ESPN Baseball Tonight (Genesis),
Grand Slam (Playstation), Virtual League Baseball (Virtual Boy),
Ken Griffey's Winning Run (Super Nintendo), Tecmo Super Baseball (Genesis)
Hot Wheels: All Out
Grade: D-
Publisher: DSI Games (2006)
Reviewed: 2007/1/8
Rating: Everyone 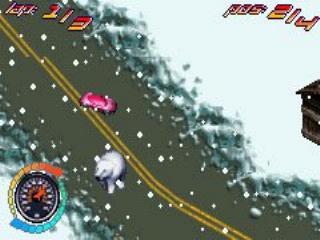 What initially attracted me to this bargain-bin racer was its isometric (tilted overhead) camera angle. Providing an ideal perspective of both the cars and scenery, this view has been effectively used in many old-school racers, and more recently in the excellent Racing Gears Advance (2005). Sadly, Hot Wheels falters badly with its sloppy gameplay and uninspired tracks. The tiny cars look okay, but the ice, volcano, and city tracks lack detail and creativity. Only the colorful jungle stage is even the least bit interesting. The courses are strewn with cheap hazards, including potholes that collapse from underneath and flamethrowers that trigger without warning. In terms of racing, there's little sense of speed, and the collision detection is deplorable. Just driving close to an opponent causes a "bump" to occur, giving him a boost while you come to a near standstill! There are ramps to jump, but the physics is laughable as your car gently floats in the air without even changing its orientation. Hot Wheels provides ample challenge and a handy password option, but this poorly constructed racer is lukewarm at best. © Copyright 2007 The Video Game Critic.
Find Hot Wheels All Out on eBay, Amazon, YouTube, Forums
Copy link to this review
Our high score: 3024
1 player
If you like this game, try: Supercross 3D (Jaguar),
Racing Gears Advance (Game Boy Advance), Road Trip (Playstation 2),
Danny Sullivan's Indy Heat (NES), Zzzap and Dodgem (Bally Astrocade)