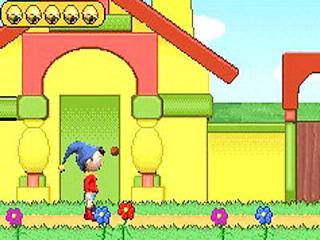 Living in a world of endless conflict and mindless violence, kids today could use a kinder, gentler video game experience. It's a sentiment I've always held near and dear to my heart. That's why I took a break from ripping out spines in the latest Mortal Kombat to review Noddy: A Day In Toyland. Designed for kids ages three and up, Toyland offers platform action similar to Super Mario Bros., except slower and simpler.

Noddy is a jumping elf who collects coins in fairy-tale worlds that scroll both left and right. Spicing things up are occasional side-scrolling driving stages. As I read the intro text it dawned on me that Noddy might be better suited to kids who can read to some extent. I admired the pseudo-3D appearance of the characters, but was less impressed with the flat, uninspired background graphics.

Still, you have to respect Noddy's crisp controls and sensible stage designs. That singsong music I found so irritating is apparently somewhat appealing from a kid's point of view. A Day In Toyland serves its purpose as a "starter" video game for kids, allowing them to learn basic game concepts without becoming too frustrated. It's a sensible way to get kids headed down the road to video game addiction. © Copyright 2006 The Video Game Critic. 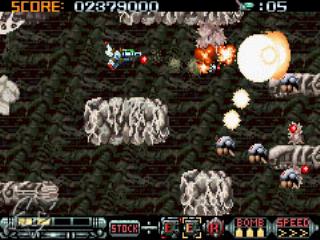 If you occasionally crave a good side-scrolling shooter, Phalanx will satisfy your urge. Originally available for the Super Nintendo in the mid-90s, this game was the victim of one of the worst marketing campaigns in video game history. Inexplicably, the box cover featured some bearded hillbilly with a banjo! It was meant to draw attention to the game, but it backfired big time.

Phalanx isn't unusual as shooters go. Armed with a rapid-fire gun and three smart bombs, you can collect multiple weapons, power them up, and switch between them on the fly. Adversaries include mechanical monsters, gross organic creatures, and combinations of both. Some fly in from the background with the help of some not-so-impressive pseudo-3D effects. A few creatures are downright tiny and can be hard to make out on the small screen. The bosses are pretty lame, although I do appreciate how chunks of them break off as they wear down.

The eight stages are average at best, but Phalanx does throw a few surprises your way. Supply trucks explode with worms when shot, and one stage has water on both the top and bottom of the screen (that's how it is in space!) The game saves your high scores and lets you continue on your last stage. You won't play Phalanx for hours on end, but it's not a bad way to get a quick fix. © Copyright 2003 The Video Game Critic. 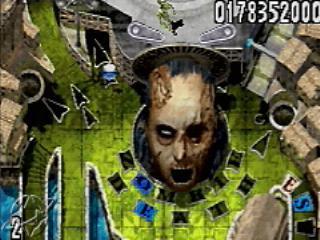 Believe it or not, this was the game that finally convinced me to purchase a Game Boy Advance - my first portable! Being an avid fan of the House of the Dead (HotD) light gun games, I didn't want to miss out on this odd but wonderfully conceived spin-off.

Pinball of the Dead offers three separate vertically-scrolling tables rendered in the distinct House of the Dead style. For the uninitiated, that means plenty of shambling zombies, gallons of blood, and maniacal bosses.

Each table features several sets of flippers and numerous bumpers and targets. The gameplay is fast, fun, and challenging as hell. Tiny zombies (which can be hard to make out) march around the table, and terrific scream effects are heard as they are splattered with the ball.

It's hard to find this kind of instant gratification on the consoles anymore. Each ball begins with a brief first-person target-shooting sequence where you can win a bonus. Pinball's high-octane soundtrack is unmistakable, and there's even some of the trademark bad voice acting.

The first table has a clock-tower theme, and its decrepit, weathered look makes it my favorite. The second has a sterile "scientific lab" look, and it doesn't offer as much to do. The third table is a real treat, constructed entirely of human flesh! Now there's something you don't see everyday!

Sega didn't skimp on options either, allowing you to customize every aspect of the game from the number of balls to the color of the blood. Not only does the cart record high scores, but you can even save games in progress.

If Pinball of the Dead has a weakness, it lies in the lame "tilt" control. Sure it jostles the table a bit, but never enough to affect the ball movement. Pinball of the Dead is a highly underrated game, and House of the Dead fans are sure to have a ball with it. © Copyright 2004 The Video Game Critic. 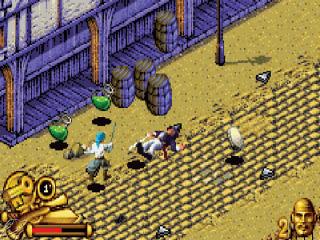 Pirates of the Caribbean for the Game Boy Advance is the perfect antidote to the tediously slow Xbox edition. Its playful graphics are refreshing and bright, offering a nice isometric view of the scenery. The characters are small but nicely animated. The sound effects are clear and bold, but take a backseat to the outstanding music, featuring my personal favorite pirate song: "Yo ho - yo ho - a pirate's life for me" (everybody sing!).

The game's short, entertaining missions involve hunting for treasure, fighting soldiers, and collecting items. Exploring townships, sandy beaches, dark caves, and dense jungles is fun, although the sword fighting is pretty simplistic. The puzzles are of the typical lever-pulling variety - nothing particularly taxing. Adding variety are water stages that let you sail your ship and engage in battles on the high seas. A clever control scheme uses the shoulder buttons to fire cannons off both sides of the boat. A

Although the pacing is brisk, the action does stall a bit when locations begin to repeat, and I did have a few "what now?" moments. What really annoys me is how such a quality title can lack a battery backup! Instead, you're forced to write down a "password" composed of random letters. What is this, the 90's? How much money did TDK save with this bonehead move, four cents per cartridge? Lame! Even so, Pirates of the Caribbean proves to be an entertaining little adventure that nicely captures the flavor of the film. © Copyright 2005 The Video Game Critic. 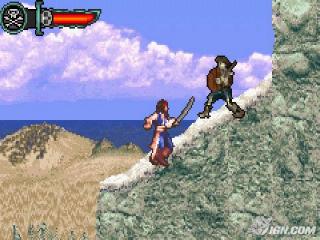 With so many Pirates of the Caribbean titles coming out this year (many of which have been described as "unplayable"), who would have predicted that the Gameboy Advance version would trump them all? But it's true - this engaging little game kept me playing for weeks on end, thanks to its reasonable learning curve and old-school sensibility. You set sail on the open seas, searching out new destinations and engaging in ship-to-ship combat. Actually, you often need to engage in sea battles whether you want to or not, which can be frustrating. Once you disable a vessel, you can board it, battle the crew, and gather valuable booty.

Upon reaching a port, most towns have shipyards where you can purchase ship upgrades, weapons, and other helpful items. Dead Man's Chest is structured similar to Sid Meier's Pirates (Xbox, 2005), but there's less strategy and more action. Each island has a number of locations to explore in the form of 2D platform stages. Brandishing your sword and pistol, you'll battle your way through English troops, spear-toting tribesmen, and vicious wild animals. When you slash at foes, little numbers display the amount of damage inflicted - it's like Castlevania on the high seas!

The graphics aren't as rich as Castlevania, but they're certainly attractive and well defined. The game is brilliantly paced, maintaining your interest by gradually introducing new moves and challenges. You can save at any time, and the rousing theme music keeps the excitement level high. The developers did an extraordinary job of creating a captivating adventure with balance, polish, and a steady difficulty progression. If you were disappointed with the recent spate of 3D pirate games, this little gem is sure to lift your spirits. © Copyright 2006 The Video Game Critic.

Not often does a game come around exuding as much old-school charm as Qwak. Originally available for the Amiga computer, the author has graciously ported this sweet slice of the past to the Gameboy Advance, and it's a perfect fit! In Qwak, you control a duck in a series of progressively difficult platform challenges. You'll collect fruit for points, toss eggs at wandering spooks, and collect keys to open doors.

It sounds like every video game made in 1983, yet Qwak is surprisingly fresh. Exceptionally well-programmed, it sports clean graphics, crisp collision detection, and responsive controls. It's especially satisfying to jump on a pile of fruit and see a bunch of point values bubble up in their places. Not only can you toss eggs in a rapid-fire manner, but they even bounce around, allowing you to "play the angles". The stages contain elevators, disintegrating floors, secret rooms, and items galore.

Besides gobs of fruits, you'll collect keys, gems, flowers, mushrooms, pendants, hearts, and six different types of potions. While these items add complexity, they also add another thing: confusion. Qwak looks like a pick-up-and-play game, but you'll want to peruse the manual first. While the gray potions provide layers of "armor", your current armor level is not displayed on the screen, so you're never quite sure if the next hit will be your last. It's especially problematic when you consider the mandatory hits required to reach certain keys.

Still, Qwak is great for a quick fix, and top scores are recorded to a high score screen that's conveniently saved to the cartridge. The easy-listening soundtrack is pleasant enough, and I love the "quack" sound effect when you bite the dust (and turn into a roasted duck in the process). Qwak is easy to play but difficult to master - the hallmark of all great games. If you're looking for a slick title with an old-school sensibility, be sure to purchase a copy of this limited-edition gem. Qwak is available at www.qwak.co.uk. © Copyright 2007 The Video Game Critic.