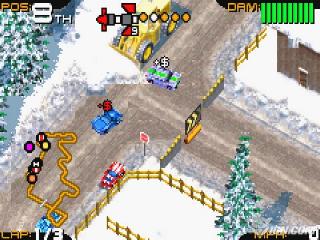 This is my favorite Gameboy Advance game ever! Yes, I do say that all the time, but this time I really mean it (I think). An old-fashioned overhead racer at heart, Racing Gears features tiny cars on winding tracks in various locales and weather conditions. The view is isometric (tilted overhead), allowing for a more detailed view of the scenery and road ahead. When trees or tall buildings obstruct your view, your car's position is clearly indicated by a superimposed circle with an arrow indicating your direction.

Racing Gears has "old school" written all over it. I've seen other games like this (including Rally Chase for the Neo Geo, Combat Cars for the Genesis, and Power Drive Rally for the Jaguar), but never executed this well. For one thing, the camera is pulled back far enough that you easily anticipate upcoming turns and keep an eye on opponents. That's critical, because you can also employ weapons like oil slicks, smoke screens, rockets, and mines.

In order to prevent utter chaos at the start of each race, weapons are disabled during the first few seconds when cars tend to bunch together. The weapons are easy to deploy and very effective. Being the victim of a smoke screen attack causes your entire screen to cloud up - pretty neat! You'd expect the digital control to be a detriment, but I could navigate the courses and perform controlled power-slides with minimal effort.

Racing Gears is instantly playable, and even gives you a "mini-boost" when you wander off the track. The scenery is a nice mix of city streets and country roads, with undulating terrain and strategic ramps that add depth to the otherwise 2D graphics. Inclement weather conditions include realistic rain and gorgeous snowstorms. With one or two minor exceptions, the electronic tunes are outstanding, and the car engine sound effects are mercifully understated.

But what makes Racing Gears extra addictive is its championship mode, which lets you soup up your car as you compete in progressively difficult circuits. The upgrade screens are easy to use, and the game saves your place automatically. In an era when most console games are more concerned with realism (Gran Turismo) or chaos (Burnout), Racing Gears delivers what really counts: the fun! Remember that? © Copyright 2005 The Video Game Critic. 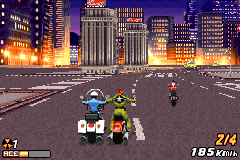 I heart the original Road Rash (Genesis, 1992) but its sequels struggled to recapture the exhilaration of hitting some poor schmuck over the head with a club while speeding on a motorcycle. That's a special feeling. This GBA version looks good at least. After being subjected to the rough polygons of Sega Rally Championship (Sega, 2003) the well-defined sprites and smoothly-undulating roads in Jailbreak are a sight for sore eyes.

Diverse stages let you cruise along a beach, plow through snow, and enjoy a remarkable city skyline. It's easy to stay on the track and the right shoulder button lets you kick or punch the nearest racer. Your goal is to beat three other racers (both literally and figuratively) while avoiding a persistent motorcycle cop. But while it looks like classic Road Rash, it's not the same. For one thing, having only three opponents is kind of lame, especially when the "rubber band physics" keeps shooting you from first to last place and vice versa.

In the original Road Rash one good whack of the club would send a fellow rider tumbling, but here you have to hit him a dozen times! What's the point? Likewise that cop hounds you so relentlessly it just grows tiresome. There's no music during the race and the abrasive, repetitive voices got on my nerves. You earn upgrades but they seem to have minimal impact. Road Rash on the GBA feels like an example of programmers just painting by the numbers and hoping for the best. © Copyright 2016 The Video Game Critic. 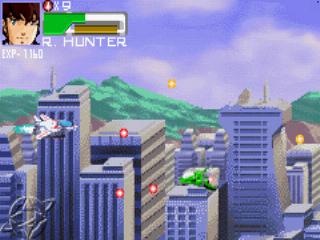 Most side-scrolling shooters have something to offer, but Robotech is worthless with its generic graphics and boring-as-hell stages. Making matters worse, the stages drag on and on, long after you've lost interest. Enemies and projectiles are large and easy to see, but the repetitive planes and robot enemies are the worst.

Your ship can transform into a mech to engage ground combat, but there's really no point. If you can make it through the first stage without dozing off, you'll encounter a boss that's instantly forgettable (I think there was a boss). You can collect power-ups, but since your ship is such a huge target it's difficult to maintain any significant firepower.

Robotech doesn't even bother to keep score, so apparently the whole point is to see how long you can tolerate the monotonous gameplay. Adding insult to injury is the atrocious soundtrack, which sounds suspiciously like random keys being hit on a Casio keyboard. Why does this game exist? © Copyright 2005 The Video Game Critic.