Based on yet another animated television show from the 90's, Batman Beyond: Return of the Joker is a different breed. There's a new Batman in town named Terry who's decked out in a black outfit with a red insignia. His mentor is an elderly Bruce Wayne - the original Batman. The gameplay is unusual as well. It's a side-scrolling brawler where you move in and out of the screen a la Double Dragon (NES, 1988). I normally love that style of play, but the animation here is pretty choppy. Batman can punch, kick, and equip special weapons like nunchucks. He'll face a lot of scary bad guys including minotaurs, dog-men, and laser-shooting robots. There are traps as well, and Batman's ability to glide comes in handy for avoiding flames or spikes. Batman Beyond has a solid storyline and cool music that picks up in intensity when the action does. What ruins the game is its confusing, maze-like stages. Every room looks the same, with doors and elevators leading all over the place. When you clear a room the Batman Beyond logo flashes on the screen and it kind of looks like an arrow. Is it telling me to go somewhere? That's what I thought, but then I ended up back in an old area where I had to fight the same goons all over again. Ugh. Batman Beyond could have been an intriguing title, but the game makes you feel like you're on some never-ending wild goose chase. © Copyright 2020 The Video Game Critic.
Find Batman Beyond Return of the Joker on eBay, Amazon, YouTube, Forums
1 player
If you like this game, try: Double Dragon (CD) (Neo Geo),
Batman: The Animated Series (Game Boy), Batman: Return of the Joker (Game Boy),
Return of Double Dragon (Super Nintendo), Batman Beyond: Return of the Joker (Nintendo 64)
Batman: Chaos in Gotham
Grade: D
Publisher: Ubisoft (2000)
Reviewed: 2020/4/3

Chaos in Gotham begins with an exciting introduction that plays out in complete silence. What the heck is going on? The cutscenes are the same way. That's a bug, right? It's a shame because the game seems faithful to the New Batman Adventures television show. Batman runs in an exaggerated manner but is fluidly animated. In addition to jump-kicks and punches he has a useful dash move that stuns enemies before they can get off that first shot. Beating up bad guys would be more fun if the sound effects were synced up better. But the platform jumping where Chaos in Gotham really falters. You can jump to hang onto a ledge and pull yourself up, but you need to be at just the right pixel to grab. It's not always clear where that spot is, and you'll incur a lot of damage trying to find it! The first stage is an ice palace that turns out to be the lair of Mr. Freeze (spoiler alert!). The second stage is a museum where you find yourself fighting on the bones of fossilized dinosaurs before meeting the Joker and Harley. The third stage takes place on a train and features Two-Face. Each stage has its own villain! There are a few puzzles that usually require the sliding of blocks. Batgirl stars in several stages including a high speed motorcycle ride. Chaos in Gotham has all the ingredients for an action-packed adventure, but it feels too sloppy and uncooked to recommend. © Copyright 2020 The Video Game Critic.
Find Batman Chaos in Gotham on eBay, Amazon, YouTube, Forums
Save mechanism: password
1 player
If you like this game, try: Batman: The Animated Series (Game Boy),
Batman Vengeance (Playstation 2), Batman Begins (Game Boy Advance),
Batman Beyond: Return of the Joker (Game Boy Color), Batman and Robin (Playstation)
Buffy the Vampire Slayer
Grade: D
Publisher: THQ (2000)
Reviewed: 2008/9/30
Rating: Everyone (animated violence) 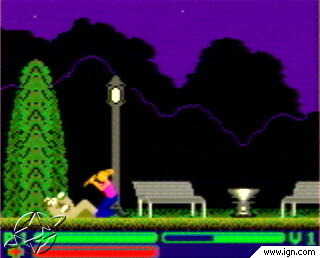 Despite a killer license, Buffy the Vampire Slayer doesn't have much to offer. Our blonde heroine simply kicks and punches her way through generic undead thugs in repetitive side-scrolling stages. The character sprites are flat but the animation is surprisingly fluid, calling to mind Flashback for the Genesis (1993). The fighting action is shallow, but hearing a ghoul shriek as you stake him through the heart is satisfying. Sometimes you're even treated to flying body parts! The graveyard, mansion, and zoo locations are remarkably dull, and the sewers stages are marred by awkward platform jumping. Buffy's visuals are so dark that it can be tough to make out your enemies at times. Speaking of which, it's easy to get the impression that you're fighting the same zombie over and over again, who keeps returning in a new outfit! The game isn't hard and there's no score, so where's the challenge? It feels like you're just going through the motions as you mindlessly forge ahead, scribbling down a new password after each stage. At least the jaunty soundtrack is relatively good, striking a nice balance between creepy and funky. The illustrated cut-scenes look rough, but the witty dialogue is consistent with the show, tossing out references to several episodes. Even so, Buffy fans will regard this as more of a collectible than a source of entertainment. © Copyright 2008 The Video Game Critic.
Find Buffy the Vampire Slayer on eBay, Amazon, YouTube, Forums
1 player
If you like this game, try: Buffy the Vampire Slayer: Wrath of the Darkhul King (Game Boy Advance),
Buffy the Vampire Slayer (Xbox), Buffy the Vampire Slayer: Chaos Bleeds (Xbox),
Corpse Killer (CD) (Sega 32X), Double Dragon (Genesis)
Dragon's Lair
Grade: B
Publisher: Capcom (2001)
Reviewed: 2003/8/31

Indiana Jones was always great on the big screen, but how would he look on the smallest screen of all? The answer: like a little spider! Wow, these characters are small. Close examination reveals some interesting animation, but still. Infernal Machine's gameplay features Tomb Raider-esque shooting and platform jumping, but the 2D environments are poorly rendered. Multiple shades are used to convey depth, but it's hard to tell where you can and can't go. It's not unusual to fall unexpectedly or run smack into an invisible wall. The gunplay is unrealistic but effective - just face an enemy's general direction and unload. Sometimes you'll engage in comical shootouts with a Nazi standing right in front of you. The platform action is weak, but not as bad as the underwater mazes you have to swim through as your air supply depletes. On a positive note, the stages are reasonable in size, and the user interface makes it easy to manage your inventory. My favorite part of this game occurred when I blew up a wall with a grenade - much like I did 23 years earlier while playing Raiders of the Lost Ark (Atari 2600) with my sister. But besides conjuring fond memories of other games, Indiana Jones and the Infernal Machine doesn't have much to offer. © Copyright 2008 The Video Game Critic.
Find Indiana Jones and the Infernal Machine on eBay, Amazon, YouTube, Forums
1 player
If you like this game, try: Raiders of the Lost Ark (Atari 2600),
Tomb Raider (Playstation), Indiana Jones and the Emperor's Tomb (Xbox),
Indiana Jones and the Staff of Kings (Wii), Tomb Raider III (Playstation)
Legend of Zelda: Link's Awakening DX
Grade: A-
Publisher: Nintendo (1998)
Reviewed: 2018/4/29 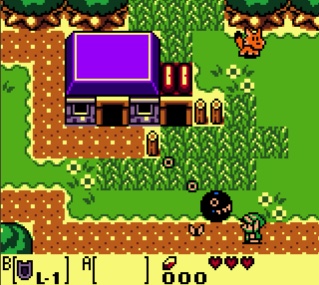 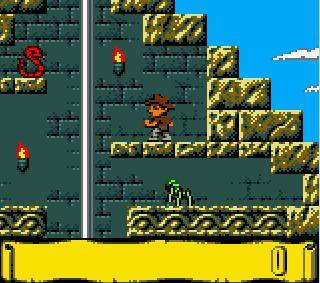 I've seen many classics make the transition to the portable universe, and many arrive butchered beyond recognition. Fortunately Montezuma's Return is the exception to the rule, retaining all the qualities that made its predecessor, Montezuma's Revenge (Colecovision, 1984), such a hit. You control a little Indiana Jones exploring a pyramid composed of a huge grid of rooms jam-packed with danger. There are moving platforms, ropes, spikes, rolling skulls, and plenty of coins to collect. If you obtain a knife, you can survive one hit from a creature like a cobra, rat, or spider. As in the original game, the controls are exceptionally crisp and responsive. Your explorer moves swiftly and can easily hop between platforms. I loved shimmying down ropes and sliding down poles. The levels incorporate all the stuff you'd expect to find in a real pyramid, like cobwebs, flaming pits, skeletons chained to the walls, and platforms that disappear at regular intervals. The visuals are a little dark, and certain items (like the purple keys) can be a little hard to make out. Pressing the select button brings up a map, and there are 150 rooms in all! 150! Despite that, the game has a somewhat linear structure and it's pretty easy to get stuck. The soundtrack will get on your nerves, but you can shut it off via the options menu. All in all, Montezuma's Return is a heck of a lot of fun, mainly because it doesn't try to fix what's not broken. © Copyright 2012 The Video Game Critic.
Find Montezuma's Return on eBay, Amazon, YouTube, Forums
Our high score: 8,700
Save mechanism: Password
1 player
If you like this game, try: Montezuma's Revenge (Colecovision),
Montezuma's Revenge (Atari 2600), Barkley Shut Up and Jam (Genesis),
Skeleton+ (Atari 2600), Pitfall 3D: Beyond the Jungle (Playstation)