Centipede is one of the greatest arcade games of all time, but you'd never know from playing this Game Boy edition. This reminds me of one of those old LCD watch games with the pre-rendered black shapes blinking all over the place - not a pretty sight! The mushrooms look like letter T's littering the playing field and the animation is heinous.

In contrast to the quick trackball controls of the arcade, dragging your cannon around the screen feels slow and laggy. Perhaps to compensate for the lousy controls the collision detection is remarkably generous. Just about every shot manages to hit something. The spider who menaced players in the arcade now moves in slow motion. Even the scorpion (which looks like a banshee) is a sitting duck.

The default difficulty is novice for some reason, which is tremendously boring. I actually felt a sense of relief whenever I lost a life! You need to crank up the skill level all the way to "expert" to keep the games at a tolerable length. When a game doesn't get interesting until wave 28, that's not a good sign.

Centipede has several two-player options (including coop) but I can't imagine inflicting this on another person. The only thing this Centipede has going for it is its title screen music, which is awesome. As far as its tepid gameplay goes, there's really no excuse considering a kick-ass version of Centipede (Atari 2600, 1983) was released over a decade before. © Copyright 2018 The Video Game Critic.

I played the original Choplifter (Atari XE, 1982) on the heels of the Iran hostage crisis, and the idea of flying into enemy territory in a helicopter to rescue people was an intriguing premise. Considering how fun and satisfying that game was, this ill-advised sequel is disappointing. Instead of flying freely it feels like you're in some kind of obstacle course.

The geography is so constrained it's practically claustrophobic. There's not much room to maneuver above mountains and if you touch a bird or stormcloud your helicopter will explode. You're better off flying directly into a brick wall.

To destroy cannons and roving tanks you must rotate your copter sideways, but you really need to finagle with the controls because they absolutely suck. Sometimes I would fly backwards across the top of the screen just because I got tired of trying to turn around!

There's never much room to land when rescuing people and you'll often bounce off a tree or building while trying to set down. I usually cut portable games a little slack but this game totally misses the mark. Choplifter II takes a classic title, puts it through a blender, and serves it up with a generous helping of aggravation. © Copyright 2020 The Video Game Critic.

I had heard good things about this Donkey Kong, but didn't realize how ambitious it was. The first four stages are lifted directly from the original arcade game (1981) - including the pie factory screen. Not only do these play as well as the arcade - they play better. The controls are more forgiving and you can now tumble down to a lower platform without dying. I really dig the new sound effects like Donkey Kong's growl and Pauline's scream. The opening screens are actually just a prelude to the "real" game, which features larger, scrolling stages.

Your challenge is to grab a big key and transport it to a door while employing a series of new gameplay mechanics. Mario can now vault, swing on poles, throw items, and even "ride" on certain enemies. It reminds me a lot of Mario Vs. Donkey Kong (Game Boy Advance, 2004). These new stages feature faint "background graphics" like city skylines and forests, giving them some personality. Playing on the Super Game Boy further enhances the experience by adding rich colors and an arcade-style border.

Three save slots are available and you're prompted to save often. The new stages will exercise your brain as much as your reflexes... and that's the problem! Some are real brain teasers, requiring you to position new platforms and perform an elaborate sequence of actions before a timer runs out. I wish Donkey Kong didn't make me think so much, but there's no denying the quality of this first-class title. © Copyright 2014 The Video Game Critic.

Duck Tales (NES, 1989) is considered a beloved classic, so how does the portable version stack up? Well that toe-tapping theme song certainly makes a good first impression, and a handy stage select allows you to pick between the Amazon, Transylvania, Himalayas, American Mines, and the Moon! Actually that's a bit deceptive because certain stages require keys from others. Playing the role of the cane-wielding Scrooge McDuck you'll face monkeys, snakes, and spiders in the Amazon.

The characters are impressively large and detailed, but there's not much room to move around. It's fun to take out multiple enemies with your pogo jump attack, but sometimes you can't tell what you can bounce off of. I would have never guessed I could pogo across that bed of thorns, especially with all those vines hanging overhead. Why can't I just climb across those? Scrooge also has a nifty golf swing move. Just push against any obstacle and press the button to smash it with your club. Nice.

The quality of the stages are uneven. The Amazon feels very claustrophobic, but I enjoyed Transylvania with its ominous headless knights. The Himalayas are tough because you can't pogo on the snow. And did you know there were octopuses and football players on the Moon? This game suffers from a lack of checkpoints and sometimes you jump right through a rope you were trying to grab. Overall this miniature Duck Tales is far inferior to the NES version, yet still manages to get its point across. © Copyright 2019 The Video Game Critic. 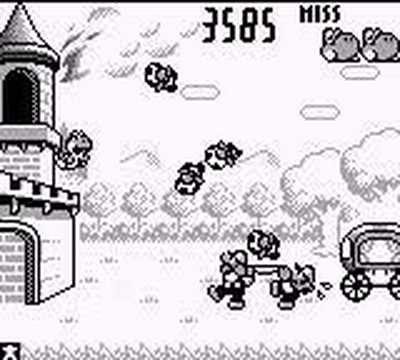 Nintendo released a series of "Game & Watch" LCD games from 1980 to 1991. In case you don't recall the technology, it used pre-printed black shapes on a gray screen. When made visible in sequence, these shapes conveyed a rudimentary kind of animation. This technique was used to create a series of cheap, portable video games. Game & Watch Gallery reprises four of these: Manhole, Fire, Octopus, and Oil Panic.

Not only do you get the original (read: choppy) versions, but also "modern" versions retrofitted with better graphics, smoother animation, and even Nintendo characters. I have to admit some of the original games were pretty clever. There's one where you catch people jumping out of a burning building with a trampoline, and it gets crazy as you try to juggle them all. In another game you try to snag underwater treasure while avoiding octopus tentacles that reach out for you. High scores are recorded but there's little fun to be had.

Frantic and repetitive, these are the kind of games that put people into mental institutions! The "gallery" part of the title alludes to unlockable pictures and history that tell the story of the series. This cartridge might have been a passable way to kill time in the 80's, but that's before we had the Internet. If you once owned a Game & Watch handheld and want to relive your youth, bump up the grade by a letter or two. Otherwise I'll quote young Indiana Jones: "This belongs in a museum!" © Copyright 2014 The Video Game Critic.

The cheesy T-Rex face on this game's title screen gave me an instant case of deja vu. Have I played this before? Kind of! Apparently the NES version which is essentially the same. Jurassic Park is an overhead adventure where you wander around heavily constrained areas while shooting dinosaurs, collecting items, and unlocking gates.

The first stage feels like a fun treasure hunt as you try to locate all the dinosaur eggs. Armed with a pea shooter you can kill pesky scampering tiny dinosaurs which inexplicably explode and leave ammo behind. Unlike the film the raptors and spitting dinosaurs are easy to elude. Scouring the park for eggs gets a little tedious after a while but the catchy soundtrack keeps you humming along.

You'll also stumble upon weapon, health, and mystery icons. The mystery icons are very cheap because half the time they blow up in your face! There are a lot of computer terminals scattered around the park, but even after you acquire multiple ID cards they tend to say "access denied". Why is this game so confusing? The graphics won't strike fear into your heart, but the bosses feature impressively large dinosaurs.

Having to save the kids calls to mind the most irritating parts of the films. I can't even avoid those stampeding triceratops myself, much less lead a kid between them. I didn't care much for this game on the NES, and I'm not in the mood to cut it much slack on the Game Boy. Late note: I will give Ocean props for putting together a nice illustrated manual with stage descriptions, hints, and fun dinosaur facts. © Copyright 2019 The Video Game Critic.

Okay, now this is more like it! In stark contrast to the meandering overhead style of the first game, Jurassic Park Part 2: The Chaos Continues is a proper side-scroller. You play the role of Dr. Grant who looks cartoonish but moves in a fluid manner. His gun has unlimited ammo and he can fire rapidly in any direction, a la Contra (NES, 1988). Precision controls make it fun to leap between grassy platforms, and when you jump into water the game kicks into Jungle Hunt (Atari 2600, 1983) mode.

Not only can you swim, but you can shoot while swimming! On land expect a lot of small chicken-like dinosaurs and pesky flying lizards. Those baby triceratops patrolling narrow platforms will dole out plenty of mandatory hits until you realize you can just shoot them! Doesn't seem right does it? The game is not particularly hard and the bosses are predictable. That said, the exciting chase sequence with that zombie T-Rex had me clutching my controller like grim death!

As with all other Jurassic Park games, there's the obligatory riverboat scene. Was this scene deleted from the film? Jurassic Park Part 2: The Chaos Continues is a sequel I can get behind. It's probably what the first game should have been. Note: The manual contains an ad for Kenner's line of Jurassic Park toys, and I have to admit they look like they'd be a lot of fun to play with! © Copyright 2019 The Video Game Critic.