With Microsoft's Xbox targeting the mature audience and Sony's Playstation 2 dominating the mainstream, Nintendo's GameCube seemed content to appeal to its traditional fan base and the younger demographic. Lightweight and compact, this cube-shaped console resembled a Fisher Price toy with its indigo color scheme and large plastic handle. Under the hood however, the Gamecube was nearly as powerful as the Xbox, and had a technical edge over the PS2. One odd design quirk was its use of small, proprietary disks instead of DVDs. While this helped curb piracy and allowed for a more compact design, the system's lack of DVD movie playback was considered a drawback.

Much like the Nintendo 64 that came before it, the GameCube boasted many superb first-party (Nintendo) titles, but lagged behind Sony and Microsoft in terms of third-party support. Still, one could argue that the GameCube library emphasizes quality over quantity, with smash hits like Mario Sunshine, Zelda the Wind Waker, Donkey Konga, Wave Race Blue Storm, and Metroid Prime. Most of these titles were ideal for multi-player action and family-oriented fun. Although many third-party software developers ignored the GameCube, there were a few big-name exceptions. Sega put its full weight behind the Cube, publishing a series of quality Sonic titles, and LucasArts provided several Star Wars exclusives. The system lacked mature titles, but Eternal Darkness and Resident Evil 4 were notable exceptions.

Due to its compact, lightweight design, Nintendo could undercut its competitors in terms of price. Unlike Sony and Microsoft which were taking a loss on each machine sold (made up quickly in software sales, of course), Nintendo actually made money on each console. Still, the system's selection of games was meager, with most third-party games simply ports of PS2 titles. In the end, Nintendo settled into third place in the competitive console wars, closely behind Microsoft's Xbox. 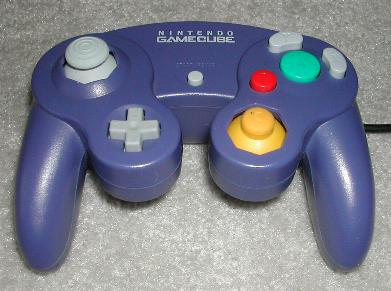 Console design: A-. Often described as "cute", the diminutive GameCube features four controller ports, two memory card slots, and a pop-top lid. The top of the unit features power, open, and reset buttons. A large gray handle protrudes from the back of the unit, but I always questioned its usefulness. Unlike the PS2 and Xbox, a component video cable for the system is not available in North America, although it can be imported. The GameCube saves its game data via tiny memory cards. Initially, the capacity of these cards was ridiculously small, but thankfully, third-party companies stepped in to provide cards with huge capacities. I own one third-party memory card, and that has been sufficient to hold my entire GameCube collection of 50+ titles.

Console durability: B. The GameCube tends to be more durable than the PS2, putting it on par with the Xbox. For certain games, I've encountered issues with intermittent "clicking" noises, but these have been rare occurrences.

Controllers: C. While the Nintendo controller appears innovative on the surface, closer scrutiny reveals a button layout very similar to the Xbox controller. There are two analog thumbsticks, but the yellow one on the lower right is small and feels uncomfortable. The tiny digital pad also feels a bit awkward. The main buttons include easy-to-press A and B buttons, but the bean-shaped X and Y are counter-intuitive. Triggers on the back of the controller exhibit a lot of range, but this feature is rarely put to good use. Finally, the ill-conceived Z button, located on the back-right of the controller, is both hard to reach and easy to forget. Overall, the controller is fair but far from optimal. On a positive note, Nintendo was the only console maker to release a first-party wireless controller, and this well-constructed "Wavebird" is a must-have for any serious GameCube player. Its only flaw is the lack of force-feedback. 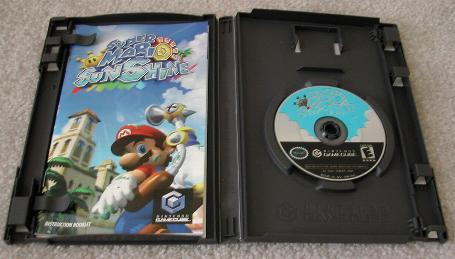 Media: B. The small GameCube disks are interesting, and probably more durable that DVDs. One drawback is the fact that they have less capacity, necessitating some games (like Resident Evil 4) to come packaged with two disks.

Packaging: B. While similar in shape and size to normal DVD cases, the proprietary GameCube cases use less plastic and don't feel quite as sturdy.

Games: B. Due to a lack of support from third-party publishers, the Gamecube was often left out in the cold as hit titles like Silent Hill 2 and Grand Theft Auto 3 were released for the PS2 and Xbox. What the GameCube did possess was its recognizable stable of franchises including Zelda, Mario, Metroid, F-Zero, Wave Race, and Donkey Kong. The Cube also boasted the best selection of games suitable for young players, including Mario Kart Double Dash, Mario Party, Super Smash Brothers Melee, and Super Monkey Ball. The console was lacking in several other genres however, including RPGs and fighting games. 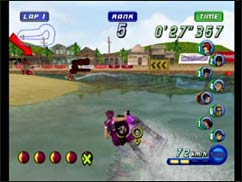 Graphics: A-. The GameCube's graphics are slightly better defined than the PS2, and virtually indistinguishable from the Xbox. However, the GameCube does not provide the same degree of high-definition support that Xbox gamers enjoy.

Collectability: A-. Compared to the Xbox and PS2, the Cube has a modest library, but many enjoyable first-party exclusives. The GameCube consoles are extremely cheap and durable. Outstanding titles like Mario Kart Double Dash, Zelda the Wind Waker, Metroid Prime, and Star Wars Rogue Squadron more than justify owning this system.

Check for GameCube systems on Ebay
GameCube Game Reviews
System Review Index
Copyright 1999-2020 The Video Game Critic.  The reviews presented on this site are intellectual property and are copyrighted. Any reproduction without the expressed written consent of the author is strictly prohibited. Anyone reproducing the site's copyrighted material improperly can be prosecuted in a court of law. Please report any instances of infringement to the site administrator.