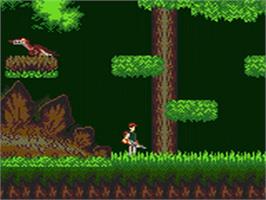 A dynamically-rendered 3D golf game for the Game Gear? That's pretty ambitious! Sure enough, World Class Leader Board delivers the most realistic golf I've experienced on a portable.

Novice players will have a tough row to hoe. You'll need to know the range of your clubs and deal with a complicated swing meter. I had to consult an FAQ just to make sense of that thing. You might not get the best viewing angle for your shot and have to adjust the camera via a clunky menu system.

Prior to each shot the fairways, sandtraps, and trees are painted before your very eyes. Your view is behind your golfer looking out directly towards the flag. Your crosshair however tends to be a little off to the side, making it hard to tell exactly where you're aiming.

This swing meter doesn't require an advanced college degree to use, but it doesn't hurt. You hold in the button to register your power, causing the left half of the meter to climb. After you release at the top, the right half of the meter begins filling in downward. When it reaches a horizontal marker you hit the button again. If you're a little off, you'll execute a nasty hook or slice. It's a challenge to stay on the fairway. On the other hand, when you need to curve around a tree it's no problem.

Once you get the hang of it the game is very satisfying. One element that caught me off guard was the sporadic commentary. The first time I hit a bunker and heard the crystal clear voice say "no doubt about it, that's deep in the sand trap", I nearly fell out of my chair!

World Class Leader Board is a sophisticated golf title for purists looking for some serious golf action. And with four courses, there's ample of replay value too. It takes some effort to get up to speed, but those efforts are ultimately rewarded. © Copyright 2022 The Video Game Critic.