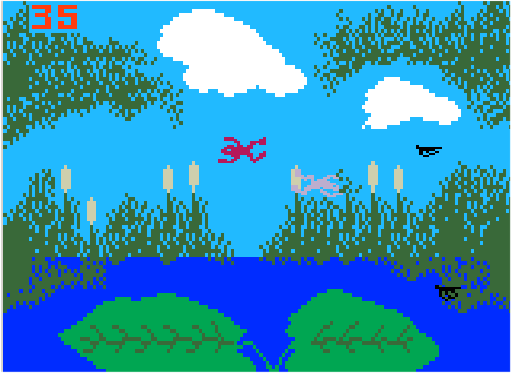 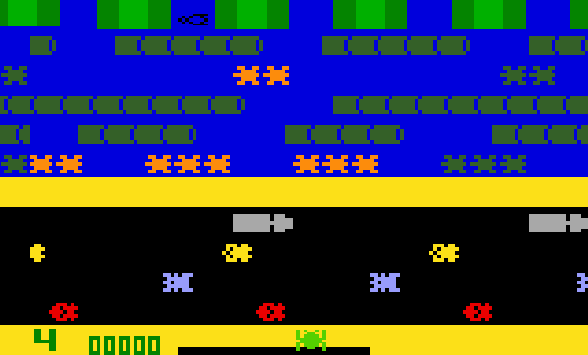 Sorry, but I couldn't help but notice how the Intellivision Frogger doesn't look or sound nearly as good as its Atari 2600 cousin. The graphics are extremely blocky (especially the cars), and the music doesn't have the harmony of the 2600. Beyond those comparisons however, this is still a fun game. All the elements of the arcade game are here -- including otters, which I don't recall seeing in any other home versions of the game. The gameplay is decent, but there is occasional slowdown, as well as an annoyingly long pause after you die. I get the feeling Parker Brothers could have done a better job with this. © Copyright 2000 The Video Game Critic.
Find Frogger on eBay, Amazon, YouTube
Copy link to this review
Recommended variation: 2
Our high score: 7250
1 or 2 players
If you like this game, try: Frogger (Odyssey 2),
Frogger (Colecovision), Frogger, The Official (Atari 2600),
Frogger II (Atari 2600), Keystone Kapers (Atari 5200)
Happy Trails
Grade: A
Publisher: Activision (1983)
Reviewed: 2001/11/9 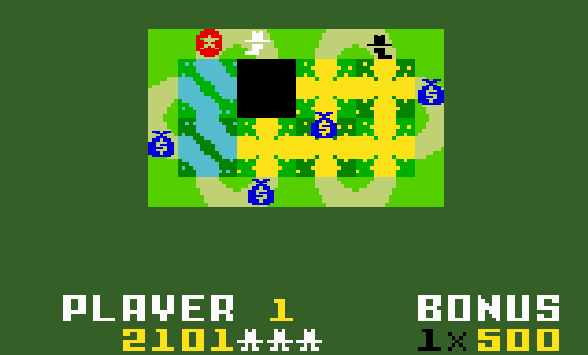 Oh yeah - this is a good one. Although Happy Trails borrows heavily from Locomotion; it's actually a major improvement, featuring streamlined gameplay and smoother graphics. The game features a little white hat (with feet of course) walking around a maze that's broken up into squares. By sliding these squares around, you must alter his path and guide him to the bags of money. In later levels there's a black hat that you have to avoid, adding to the challenge and complexity. Happy Trails takes a while to get the hang of, but once you do it's very satisfying. As you progress, the mazes become larger and more complex. A range of options offer standard mazes, random mazes, and a pair speed settings. Not a big hit in its time, Happy Trails is a real gem. © Copyright 2001 The Video Game Critic.
Find Happy Trails on eBay, Amazon, YouTube
Copy link to this review
Recommended variation: 3
Our high score: 6070
1 or 2 player
If you like this game, try: Locomotion (Intellivision),
Scooby Doo's Maze Chase (Intellivision), Tony Hawk's Pro Skater (Dreamcast),
Jawbreaker (Atari 2600), Chip's Challenge (Lynx)
Horse Racing
Grade: B
Publisher: Mattel (1979)
Reviewed: 2000/7/14 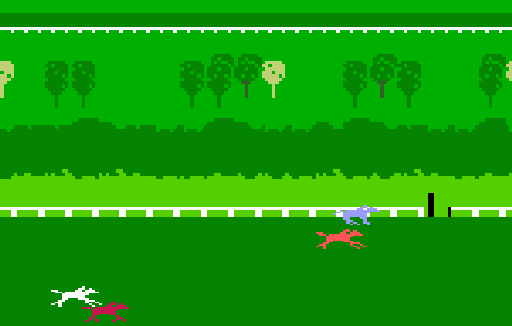 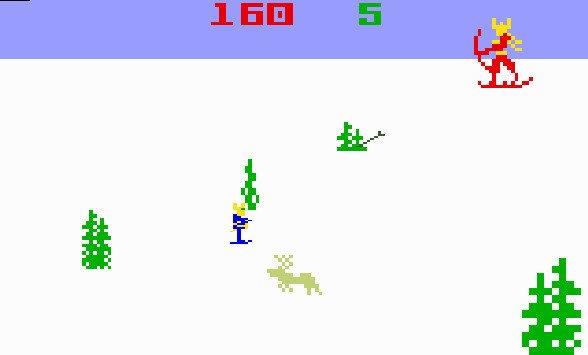