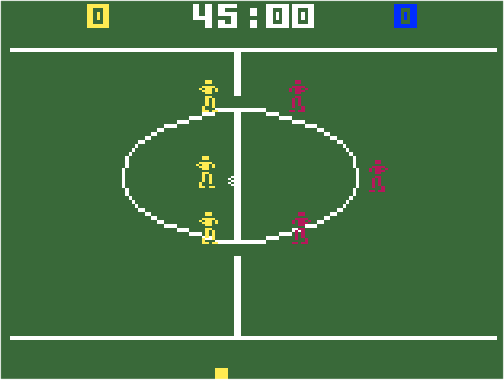 This sharp-looking soccer game has a large, side-scrolling field with well-animated teams featuring three players and a goalie. It's a shame NASL Soccer is no fun. You only control one player at a time, and these guys are slow. Having the ability to run off one side of the screen and reappear on the other side is not realistic, but it is very convenient. Like many soccer games, this one can be murder on your thumb. The ball moves slowly, and it's difficult to control passes or aim shots. The goalie control is pretty good, but overall NASL soccer is a fairly miserable game. © Copyright 2001 The Video Game Critic.
Find NASL Soccer on eBay, Amazon, YouTube
Copy link to this review
2 players
If you like this game, try: Realsports Soccer (Atari 2600),
Mega Man Soccer (Super Nintendo), Sensible Soccer (Jaguar),
Pele's Championship Soccer (Atari 2600), Realsports Soccer (Atari 5200)
NBA Basketball
Grade: D
Publisher: Mattel (1979)
Reviewed: 2002/9/22 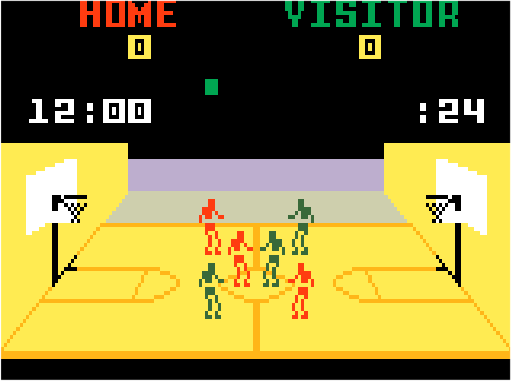 You know we're talking about an old basketball game when there are no three point shots and no dunking! Without that stuff, you'd expect the game to be pretty dull, and you'd be right. Intellivision's basketball features decent graphics but lackluster gameplay. The 3D court is viewed from a raised angle, giving you a good perspective of the action.

The court has all the necessary lines, and the nets even have backboards. The large players are well animated but clunky-looking and single-colored. Each team has three players, but two are computer-controlled. Passing the ball is done by pressing one of nine buttons on the keypad, each corresponding to an area of the court.

Yes, it's confusing as hell. You get two types of shots: a jump shot (for close shots) and a "set" shot (for long attempts). On defense there's a block button but the steals are executed automatically. I found NBA Basketball to be slow and boring. As with most Intellivision sports titles, it's two-player only, so you'll need to grab a friend, and you'll probably owe him a favor afterwards. I'm sure this game was impressive in its time, but it hasn't aged well. © Copyright 2002 The Video Game Critic. 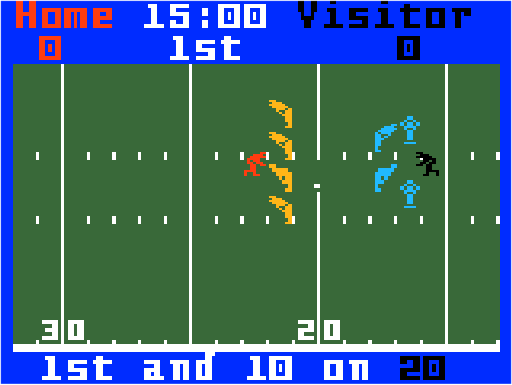 Considering it was released in 1979, NFL Football was an extremely ambitious title that still impresses to this day. It features a wide variety of formations and plays, and you can even direct receivers. Punting, field goals, safeties, and running out of bounds are all part of the action. The players are very well defined, and the screen displays all the information you need. It was many years before anything this sophisticated was available for any other game system.

Entering pass plays can be a bit daunting at first, since you need to select a formation, receiver, and a "zone" to catch the ball. Expect to hear a lot of obnoxious buzzes when you're getting started, but after a while entering plays becomes second nature. Still, it's usually pretty obvious when someone has called a passing play. My friend Eric claims that it's even possible to pull a "trick play" if you're extra sneaky.

NFL Football is generally fun to play but it does have a few issues. For one thing, it's very easy to intercept passes, since you just need to be in the "line of fire". Only one receiver goes out for a pass, so he's pretty easy to cover. Games in progress are oddly quiet because the crowd only cheers after a score and between quarters (why? I have no idea.) The clock inexplicably stops after first downs, and once it's running it keeps going indefinitely, which can be a problem. Despite its shortcomings, NFL Football is still very entertaining when played by two competitive sports fans. © Copyright 2008 The Video Game Critic. 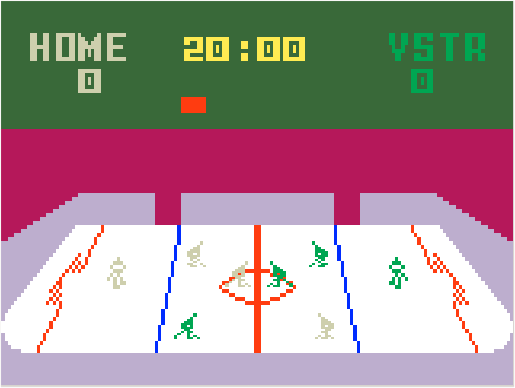 The Intellivision has a pretty solid sports lineup, but NHL Hockey is the ugly duckling of the litter. The sport of hockey is fast and smooth, and let's face it, those are two qualities the Intellivision is not known for! The rink only consumes about a third of the screen, and the tiny players look like three-legged bugs crawling around! There's a tan home team and a green visiting team, so what's the point of the NHL license?

Speaking of colors, I understand the need to highlight certain players, but could they have devised worse color scheme? There are tan, green, brown, and purple players scattered around the rink. The controls are initially uncomfortable, but after extended play, they are just painful! Even when you manage to gain control of the puck, your player is so slow that your thumb will be sore by the time you drag his listless ass across the screen.

And as if shooting wasn't difficult enough, an impenetrable goalie blocks everything, so you can only score with a quick follow-up shot. Passing is pretty much out of the question. After getting called for a penalty, it takes forever for your player to meander over to the penalty box, and once there, he slouches like a fat slob in an easy chair. Can we please get this guy a beer and a remote?!

I also find it amusing how the instructions boast of the game's "computerized scoring". Am I supposed to be impressed? C'mon - even Pong had that! Like real hockey, the game is played in three 20-minute periods, but even a single full period of this would be hard to endure. My friend Eric had a funny story about NHL Hockey. The first time he played it against a friend, they played an entire game before realizing they had been scoring on their own goalies! © Copyright 2009 The Video Game Critic. 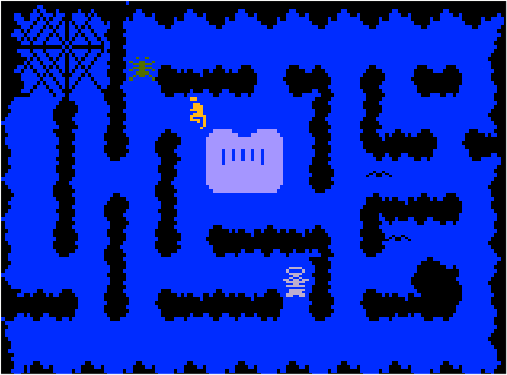 I've taken a lot of flack about Night Stalker over the years, but I'm still not convinced it's a great game. I'll concede that there's more to it than meets the eye, but slow gameplay and unresponsive controls put a damper on the fun. There's only one maze layout, but I like its asymmetric design with the big spider web in the top left corner. You control a man running from robots, so who exactly is the Night Stalker anyway?

Robots come in several varieties, including a gray one that's a dead ringer for the robot in Lost In Space ("Danger Will Robinson!"). Complicating matters are annoying bats and spiders that paralyze you temporarily. Night Stalker is challenging but it takes forever for the difficulty to ramp up. To "run" you must apply steady pressure to the directional disk, and you're constantly getting caught up on the corners of the maze.

You shoot by pressing keypad buttons, but inexplicably you can't move and fire at the same time. After every six shots you'll need to retrieve a gun which randomly appears in the maze. Night Stalker's cat-and-mouse gameplay isn't bad, but its plodding pace is a serious liability. Everything moves at the speed of a turtle - including the bullets! Night Stalker does have a few things going for it. Shooting a robot causes debris to rain over the screen, which looks pretty awesome.

Advanced robots possess additional powers like shields which change the dynamics of the game. The black robot can even destroy the protective "bunker" in the center of the screen. There's considerable depth here, but your hands will pay the price for long play sessions. Notes: It's possible to play the game using two controllers at once. Also, you can "cheat" by firing at robots as they first appear in the lower left corner. © Copyright 2011 The Video Game Critic. 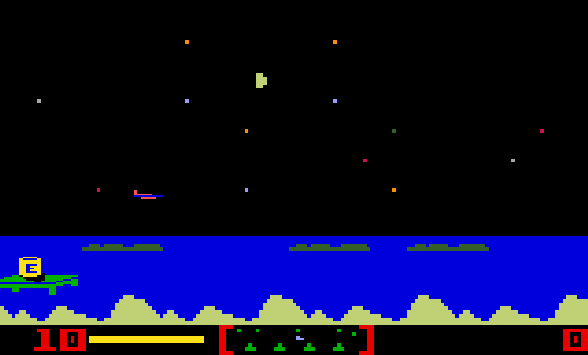 This side-scroller looks like Defender, but contains elements of Missile Command. Your mission is to protect the four cities of the water-planet Hydron, and the game ends when these cities are leveled (or your ship is destroyed). Nova Blast's graphics are only average, but I do like how the background alternates between night and day.

Waves of enemies take the form of kamikaze fighters and "water walkers". The number of onscreen enemies is impressive, but the frame rate and collision detection pay a heavy price. Your ship is equipped with rapid-fire lasers (always a good thing) and an unlimited supply of bombs. Each city has a shield that can sustain one hit.

One aspect of the game that's played up in the instructions but has little bearing on the gameplay is your ability to transfer energy from fuel tanks to recharge city shields. It sounds good on paper, but in reality there's no time to stop shooting.

Nova Blast is one tough game, and it's hard to last more than five waves on medium difficulty. I could tolerate the choppy animation in the early going, but later waves became almost unbearable. Your thumb will also pay the price for this frantic arcade action. Nova Blast has its problems, but it still offers a level of shooting mayhem rarely seen on the Intellivision. © Copyright 2002 The Video Game Critic.