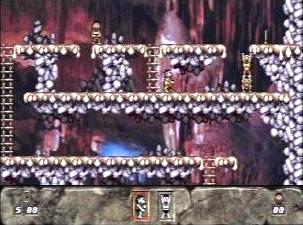 Dino Dudes is a tedious puzzle game disguised as an action-oriented platform title. Its slow, deliberate gameplay involves switching between multiple caveman characters and manipulating items in order to reach a goal. Did Atari really think this would impress anybody? When a one-player game requires "teamwork", that's never a good sign.

Each of the 80 stages (!) offers a new maze of platforms to overcome. The developers would have been better off programming only three stages, because there's no way a gamer could possibly stomach any more than that! Icons on the bottom of the screen indicate possible actions, but good luck determining what those poorly-rendered images are supposed to symbolize. At least two of them could be construed as obscene gestures!

Evolution's user interface is so poorly designed that it takes two button presses to activate a single icon! The flat, 2D graphics are not the least bit interesting, and your cavemen are a pretty dull bunch. The puzzles often require you to pass items back and forth and traverse the same areas with each "dude", which is time-consuming. In certain levels it's possible to destroy a vital item, yet the game doesn't bother to inform you that the stage has suddenly become impossible to complete. Dino Dudes has absolutely nothing going for it, and I'm pretty confident you'll hate it as much as I did. © Copyright 2008 The Video Game Critic. 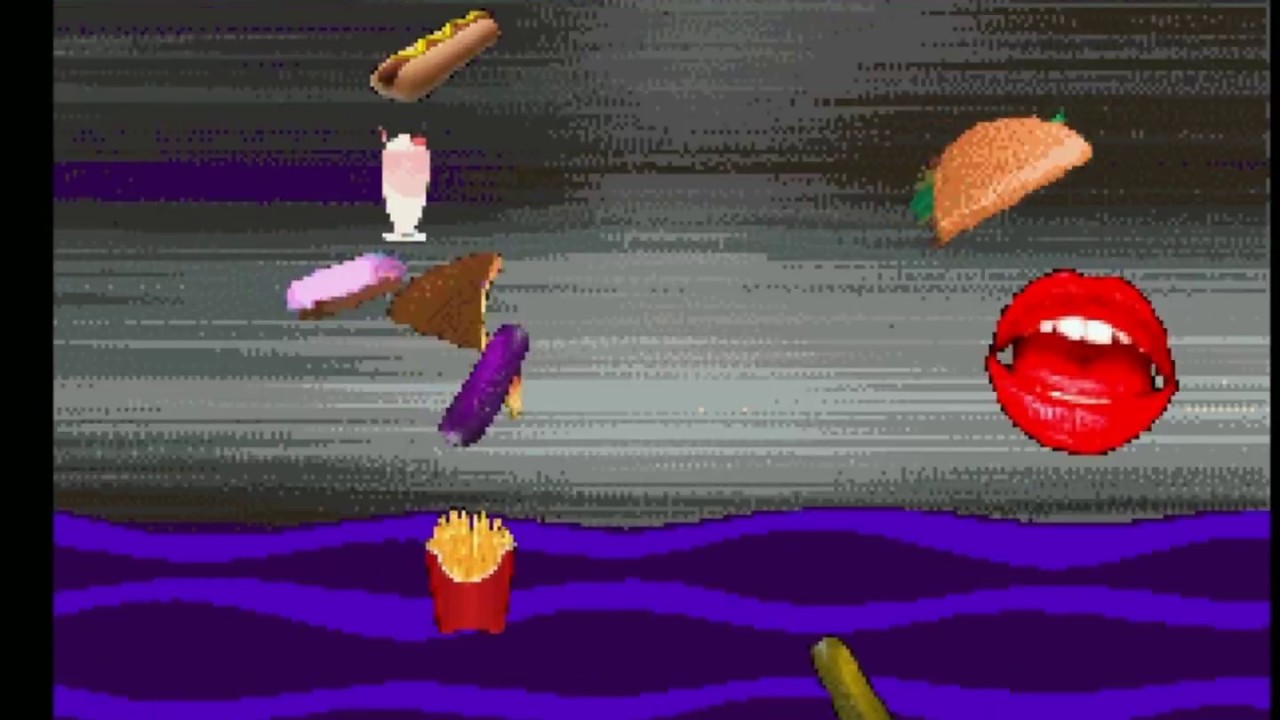 The original Fast Food (Atari 2600, 1982) was an obscure bargain bin title. It was not an obvious choice to resurrect 35 years later, but here we are. Like the original you move a chomping set of lips around the screen consuming food items that rapidly approach from the left. As you might guess the game has made a dramatic leap in the audio/visual department. The food items are now digitized, and there's a lot more to chow down on including hot dogs, pink donuts, spinning sundaes, rotating tacos, and flapping pizza slices.

Food items tend to clump together in groups, making it easy to rack up big points but at the risk of accidentally ingesting a nasty purple pickle. Eat six of those and it's game over. Fast Food 64 may be shallow but there's something about its weird, offbeat style. The bumping techno beats sound like something from the 1990's but the audio quality could be better. The psychedelic backdrops can be pretty mesmerizing if they don't make you sick.

Each frantic game only lasts a minute or so, but you'll want to play over and over for high score. My friends were highly dismissive except for Brad who became hooked on Fast Food 64, rightly pointing out it required no buttons to play! How many games can you say that about?

Secondary modes include a chaotic two-player variation and a confusing first-person "VR mode". Classic mode mimics the original's graphics but throws a lot more food your way. The box comes with a little laminated menu (and overlay) which is a nice touch. This homebrew doesn't try too hard, but if you're in the mood for something light Fast Food 64 might just hit the spot. © Copyright 2019 The Video Game Critic. 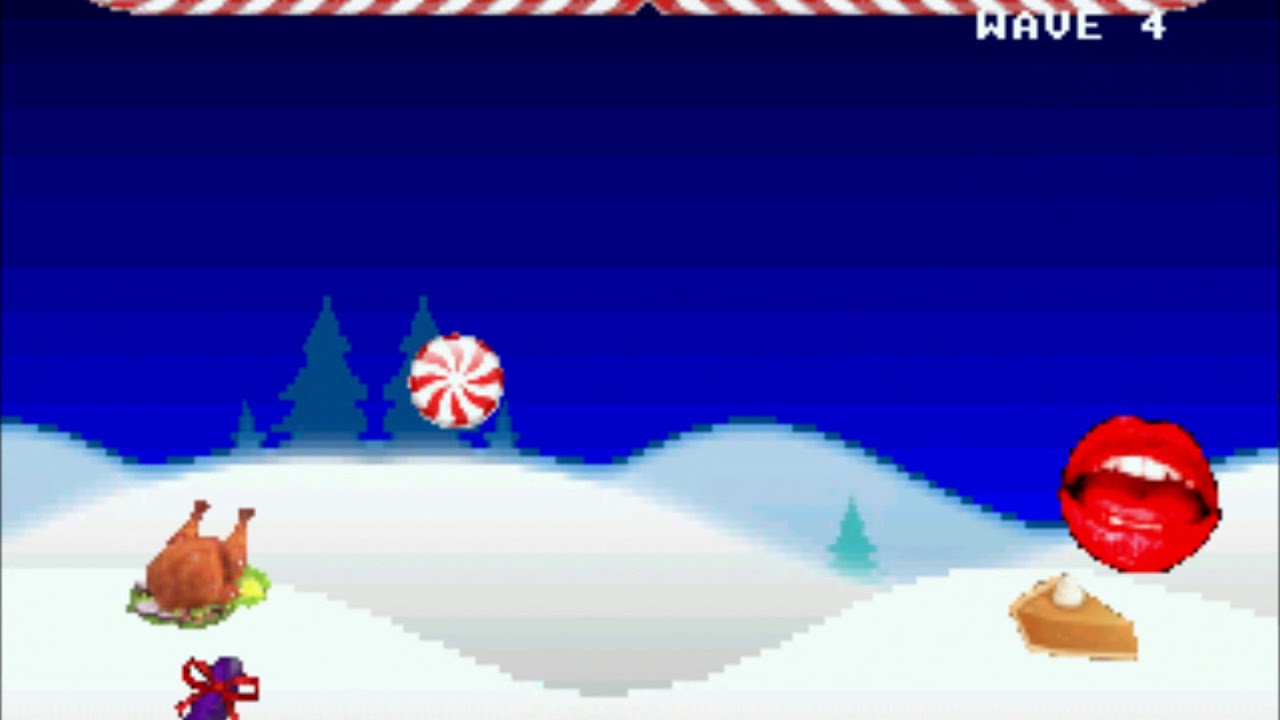 The original Fast Food 64 (Wave One Games, 2018) was a quirky, easy-to-play remake of an obscure 2600 title. You simply moved a chomping mouth around the screen to gulp down digitized food items scrolling rapidly to the left. Holiday Snacks is a more festive version of the game with Christmas music, snowy scenery, and a veritable smorgasbord of food. You'll gobble up turkeys, gingerbread men, ham, candy, pumpkin pie, and hot cocoa among others. One thing you need to avoid are the nasty purple pickles - now adorned with red bows.

The game has a mesmerizing quality but a few new elements get in the way of the fun. The new "power-up" icons make the game feel sluggish and buggy. One icon freezes all the food in place, encasing them in ice cubes. Okay, so now what? Another makes your lips downright tiny, which only serves to illustrate how erratic the game's collision detection is. The framerate struggles to keep up when these power-ups are in play, so I started avoiding icons even more than the pickles!

The bonus catch-the-Oreo-in-a-glass-of-milk mode is less ho-ho-ho and more ho-hum. The stiff controls won't give Kaboom! (Atari 2600, 1981) a run for the money but I did enjoy the cozy scenery. Hey wait - are those Jaguar games burning in the fireplace!? Oh the humanity! Fast Food 64: Holiday Snacks is the type of game you pull off the shelf once a year... and promptly place it right back up there until next year. © Copyright 2020 The Video Game Critic. 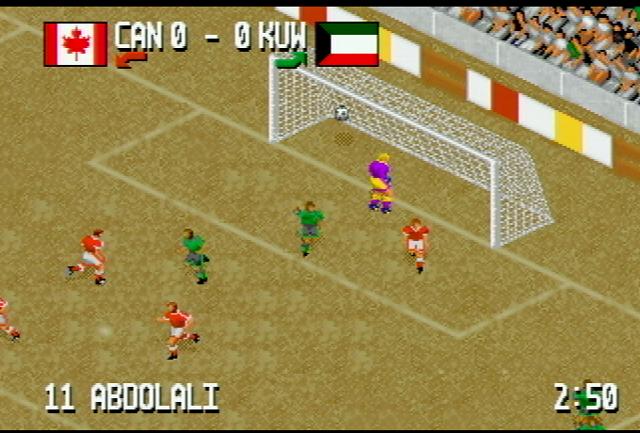 Following in the footsteps of EA's FIFA series, this is a highly playable, fast-moving soccer game. In fact, the frenetic pace makes it hard to keep track of the ball! Over 50 teams are available to play in tournament or exhibition modes. The action is viewed from an overhead diagonal view. The ball looks sharp and its movement is smooth and realistic. It's easy to pass the ball around, despite the lack of a "scanner" to track your players. When you pass up field there's usually someone in the vicinity to receive it.

Special moves are available for "star players", but apparently there aren't many stars on my USA team (*sad face*). The action is too frenzied to get all that creative, but I do like the ability to bend shots (like Beckham). It's not hard to score, but since the goal is usually off the screen, it can be hard to tell where to aim. Goalies usually get their hands on the ball but rarely make a clean catch. When someone scores you're subjected to a "celebration" screen featuring a pair of players that look more like hideous, overweight mutants. It's disturbing!

Tie games are decided by shootout rounds, which are fun and well-designed. The sound effects include a crowd that increases in volume as the ball approaches the goal. The players grunts sound clear but the sound of kicking the ball sounds more like a shotgun blast! It's not perfect, but Fever Pitch Soccer is easily one of the more playable sports titles for the system. © Copyright 2013 The Video Game Critic. 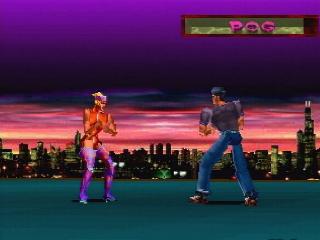 Wait - video games are supposed to be fun right? Somebody needs to remind me after playing the monumentally abysmal Fight For Life. Reviewing this wretched one-on-one fighter is best described as a hardship. Fight For Life redefines the word "bad", with shabby visuals and pointless gameplay. Even in 1995, its blocky, texture-mapped fighters looked ugly. The backgrounds are sharp and colorful, but Fight For Life's basic gameplay is a complete joke.

The characters can side-step and evade attacks, but they move like snails! Could they possibly take smaller steps? There's minimal technique involved in the fighting action, and each hit only removes a tiny sliver of your opponent's life meter. As both fighters endlessly trade punches, generic guitar music loops in the background. After what feels like an eternity, your opponent finally falls to the ground.

But the sense of relief quickly turns into despair when you realize you're just beginning round two. NOOOOOOOOO! The one amusing aspect of this game lies in its instruction book, which claims you can save your game up to 100,000 times (sorry, you'll need to reset the cartridge after that). Is that supposed to be funny!? Did Atari really expect this to compete with Virtua Fighter and Tekken!? There has to be more to life than this! © Copyright 2006 The Video Game Critic. 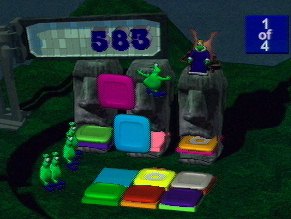 Simple-but-addictive puzzle games were the flavor of the month in the mid-1990's, and Flip Out was Atari's feeble attempt to grab a piece of the pie. But as this game taught me, the ability to manipulate colored objects does not always result in a good time. The game is played in rounds, with the idea being to flip square chips on a matrix to match a certain pattern. It's pretty confusing at first, but once you get the hang of it, it's just tedious. By incorporating a whimsical soundtrack, goofy aliens, and the occasional fart sound effect, Atari hoped you might not notice how much fun you weren't having! Unlike similar puzzle titles, there's never any pay-off in the form of explosions or chain reactions. I can't recall the last time I've been more disinterested in a video game. © Copyright 2006 The Video Game Critic.
Find Flip Out! on eBay, Amazon, YouTube, Forums
Copy link to this review
Our high score: 594
1 player
If you like this game, try: Tetrisphere (Nintendo 64),
Puzzle Link (Neo Geo Pocket), ChuChu Rocket! (Dreamcast),
Zenses: Ocean Edition (Nintendo DS), Fear Effect (Playstation)
Frog Feast (CD)
Grade: D
Publisher: Songbird (2007)
Posted: 2015/6/9 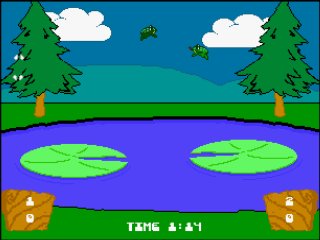 Most classic gamers can probably surmise from the title that this is a translation of the old Frogs and Flies (Atari 2600, 1982) game, also known as Frog Bog (Intellivision, 1982). Those games were simple yet fun, so you'd expect this 64-bit CD edition to be gangbusters. Fire up the CD and you're treated to an attractive title screen with catchy, twangy music. There are one and two player options. So far so good.

Then you start playing and wonder if this is even a finished game. Frog Feast is a contest between two amphibians leaping between a pair of lily pads, snagging flies that flutter over the pond to earn points. The game is timed and ends after two minutes. In the original versions you could control the height and trajectory of your leap, but not here. You always jump the same height and distance, which is lame. One button is used to both jump and stick out your tongue. It occurred to me there are 22 buttons on my Jaguar Pro controller, yet this game uses one to perform two functions.

The frogs are well-defined but the forest background looks like it was drawn with Microsoft Paint. The sky darkens slightly as you play but never actually turns to night. The sound effects are basically limited to periodic croaks. Only the Jaguar could mess up a can't-miss concept like this. Frog Feast is actually a watered-down version of an already simplistic game, prompting my friend Scott to proclaim the Jaguar as the "reverse King Midas" of game consoles. © Copyright 2015 The Video Game Critic.