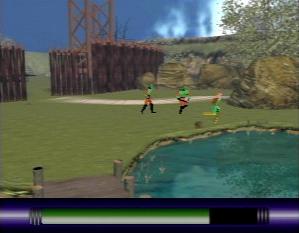 This is the game Jaguar fans don't want you to see, because it exposes the Jaguar CD as the complete farce that it is. Highlander's intro features a lengthy animated sequence lifted directly from the TV series. There was a TV series? Hey, I'm as surprised as you! You then assume the role of an unarmed young man being hunted by soldiers in a burnt-out village.

The high-resolution, pre-rendered scenery looks good, and the otherworldly soundtrack would be quite effective - in a good game. Unfortunately, your pixelated character is composed of about five triangles, and he moves like a turtle. You'd think a 64-bit powerhouse like the Jaguar would be able to handle a 3D adventure, but it struggles mightily. Simply wandering around the village is a chore due to sluggish, awkward controls.

Making matters worse are the constantly changing camera angles. Not only are these disorienting, but take forever to render! Once the soldiers get close enough to attack with clubs, you'll take a beating regardless of whether their blows actually make contact. This causes you to temporarily lose control, making you susceptible to further beat-downs. When will the hurting stop?! You can punch and kick until the cows come home, but your foes are always about a millimeter out of range.

You'll find items in huts around the village, but just when you think you've come upon something useful (like a stick), you're told "you can't use that here". Attempting to flee the village causes you to be shot dead by an unseen assailant, but take it from me - that guy was doing you a favor! If there is a decent game buried deep down in this CD somewhere, I'd be surprised.

Highlander is beyond awful - it's embarrassing. Why is the main character's hair blonde in the cut-scenes, yet bright pink in the game?? Equally shameful is the box art, which depicts Highlander as a blonde woman in what appears to be a cheap Aquaman outfit. If Atari expected garbage like this to pass as a legitimate game, perhaps the company deserved its untimely fate. © Copyright 2007 The Video Game Critic. 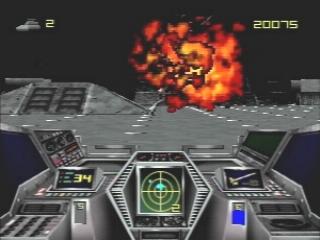 Here's another polygon shooter from Atari along the lines of Cybermorph. It even has the same woman's voice. In Hover Strike you control a hovercraft on missions to destroy targets on various planets. While trying to locate your targets, you'll be attacked by all kinds of alien ships. The controls are pretty awkward. The fire and accelerate buttons are right next to each other, and you need to hold down acceleration to maintain your speed. In addition, your missiles can only be launched via the keypad, and it's tough to find them in the heat of battle.

All the missions take place at night, which serves two purposes. First, it helps alleviate the "pop-up" problem found in most Jaguar polygon games. Second, it makes it impossible to tell where enemy shots are coming from! The graphics are very average, and the frame rate gets pretty choppy, especially when you're crossing rough terrain. A few stages are almost pitch black, and you'll be begging for them to end. On the positive side, you can select your missions, the music rocks, and the explosions are very cool. There are some neat camera options that let you view the action from different angles, but these aren't very useful during the game. © Copyright 2001 The Video Game Critic. 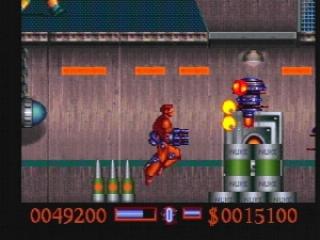 The stage designs are a bit uneven, with some that are difficult to clear and others that seem to end prematurely. The small switches you need to pull can blend into the surroundings, and you'll sometimes find yourself going in circles looking for them. Hyper Force has a LOT of secret areas, so always feel around the walls and ceilings.

Your enemies include a wide array of robots, and they look pretty cool. Some look like odd top-heavy droids, while others resemble stormtroopers from Star Wars. Your firepower is very weak to begin with, but you can purchase better weapons between stages. Unfortunately, the weapon-buying screen is confusing, and it's hard to tell what you can buy and what you already have.

You'll find bunches of money signs and other bonus items throughout the levels, and it's satisfying to walk or jump through them. The traps include your standard timed fire and spike mechanisms, but these aren't too tough to avoid. The controls are responsive, although touching a robot will send you out of control, and sometimes you get bounced around like a pinball. Fortunately, this damages the robots more than it hurts you.

The gameplay starts to feel somewhat repetitive after a while. Although the scenery changes every five levels or so, the stages at each location don't differentiate themselves very much. The understated music is amazing, and the sound effects are also distinctive. You can save up to three games to cartridge. Hyper Force is a quality game that fills a void in the Jaguar library. Get your copy at Songbird Productions. © Copyright 2003 The Video Game Critic. 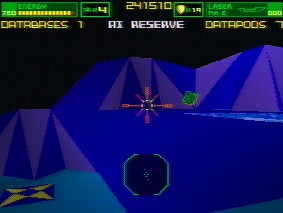 The Jaguar has many primitive polygon shooters in its library, but this one is particularly bland. The levels take place inside a computer, which essentially gave the programmer an excuse to create the most blocky, uninteresting scenery EVER. You teleport between different rooms, trying to collect data pods while shooting enemies.

Some stages contain simple puzzles that require you to hit switches to access new areas. As a first-person shooter, I-War needs a strafe button in the worst way. Most confrontations amount to trading shots until someone blows up. There are some nifty explosions, but they tend to slow down the action considerably.

I-War does feature some respectable techno music, and I like how you can save your place between stages. There's also a bonus stage that lets you collect pods as you fly through a tunnel, but it's hardly what I'd call exciting. I-War is a playable game, but there's not enough here to make you want to come back for more. It's one of those games you forget about the instant you turn it off. © Copyright 2003 The Video Game Critic. 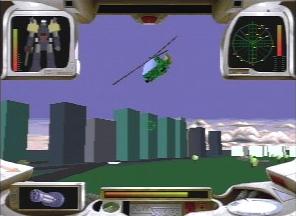 This is one of those "mech" games where you control a giant robot. It's a little slow, but it plays well. There are sixteen missions, and you can select the order in which you play them. Your mech has mounts for up to six weapons that you can select before each mission. Switching weapons is done via the keypad.

The control scheme is pretty well thought out. Once you start moving, you can change direction without stopping. That works out well because your robot walks at a slow pace, and having to hold down a button to move would be tedious. Missions usually involve destroying certain landmarks. The cities are full of rectangular block buildings without much detail. You can destroy the buildings to find weapons or power-ups.

Your enemies, which include tanks, helicopters and other robots, look great. Unlike games like Cybermorph, the animation here is very smooth. But I think the best part of Iron Soldier has got to be the explosions: they look awesome. They make destroying things all the more fun, especially when you throw a big grenade into a group of tanks. © Copyright 2002 The Video Game Critic. 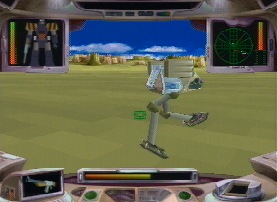 The first Iron Soldier game was a standout title for the Jaguar, with its mission-based gameplay, smooth animation, and cool explosions. Iron Soldier 2 is more of the same, with enhanced graphics and more advanced controls. The intro features some cool cinematics of your mech wandering around a city blowing everything to bits.

There are twenty missions this time around and more weapons too - including a chainsaw. My main problem with this game is that the missions are sometimes a bit ambiguous. It's not always clear what you're supposed to do, so you end up leveling the whole town! Also, I sometimes had a hard time controlling my mech.

This game really requires a good investment of time before you can really sink your teeth into it. Although it's a CD game, you won't even notice the loading time. The futuristic soundtrack is solid. Iron Soldier is a tough game, but Iron Soldier vets will feel right at home with it. © Copyright 2002 The Video Game Critic. 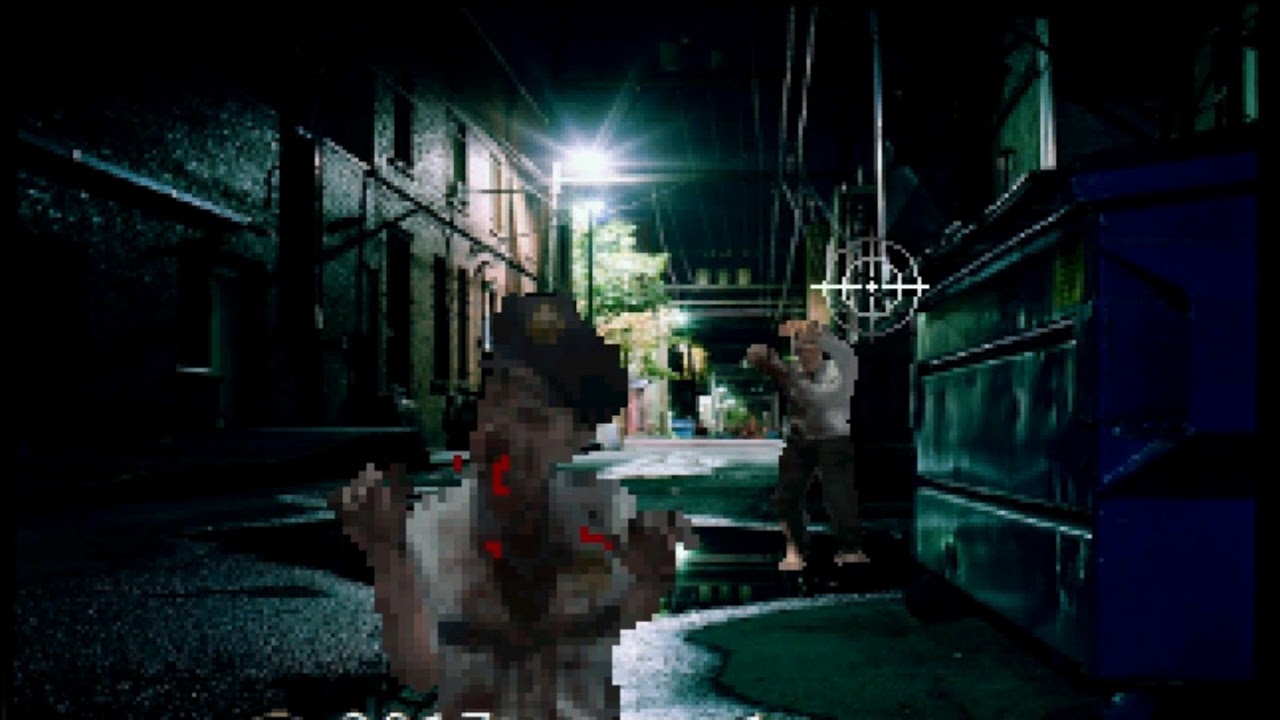 JagZombies might have made a decent light gun shooter. Each stage is a digitized image of a desolate location like a dark alley, graveyard, train tracks, warehouse, or corn field. These creepy, atmospheric stages are the highlight of the game. Zombies and bats appear in the distance and slowly shamble and flutter towards the foreground. And when I say slow, you could drink a cup of coffee before they get within striking distance! The only legitimate threats are the zombies and occasional werewolves that pop up directly in front of you.

A jumpy red crosshair lets you aim your shotgun or flamethrower. Button C is used to reload and you'll press it constantly. There are digitized growling and screaming sounds, but they are messy and repetitive. The gameplay could be a lot tighter as well. The difficulty is so low it's quite possible to beat the game on your first try. As if to compensate for the choppy reticle movement, the collision detection is ludicrously forgiving. Sometimes zombies appear to be sucked into the cursor.

The graphics are glitchy with splashes of blood often appearing in the wrong spot. The nonstop shooting is tiresome, and it culminates with an exhausting battle against a "bat king" boss with 1000 hit points! JagZombies is a mildly amusing seasonal diversion but you're not likely to play it twice in a row - or twice ever! The good news is that Corpse Killer (Sega CD, 1994) is suddenly looking a lot more respectable. © Copyright 2019 The Video Game Critic.