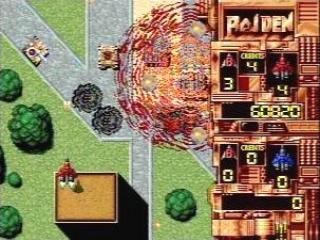 I love 2D shooters because of their simplicity and raw intensity. Raiden is a first-rate vertical shooter that lets you unleash hell on cannons, tanks, planes, and floating airships. The opening stage features tranquil farmlands, but the scenery soon shifts to urban areas, open seas, and sprawling space stations. You select between two weapons by collecting red or blue icons. Since picking up the same color increments your firepower, you'll want to choose a color and stick with it.

The blue delivers a concentrated beam, while the red offers a weaker spray. When paired with a secondary missile weapon, you can do more damage than Steven Seagal at an all-you-can-eat buffet. Also at your disposal is a limited supply of bombs which inflict heavy damage over a wide radius. For some reason their massive explosions travel up the screen as it scrolls, which causes additional damage but looks a little cheesy.

The right third of the screen is dedicated to tracking your score, ships, and credits, and it takes up a lot more room than it needs to. The play area is narrow but it scrolls sideways as you push your ship along the edges. I'm a big fan of Raiden Trad for the Genesis (1991), and this Jaguar version is better in some regards. The visuals are cleaner and enemy ships tend to catch fire before exploding (nice). The audio quality is cleaner, but the soundtrack lacks bass.

This Jaguar edition also offers a two-player simultaneous mode not seen in other versions. Still, the Genesis has the edge in terms of control, partly due to its much-needed rapid-fire option. Constantly pounding the fire button of the Jaguar controller gets old after a minute or two. This may not be the best Raiden, but it's certainly one of the more playable titles for the Jaguar. © Copyright 2010 The Video Game Critic. 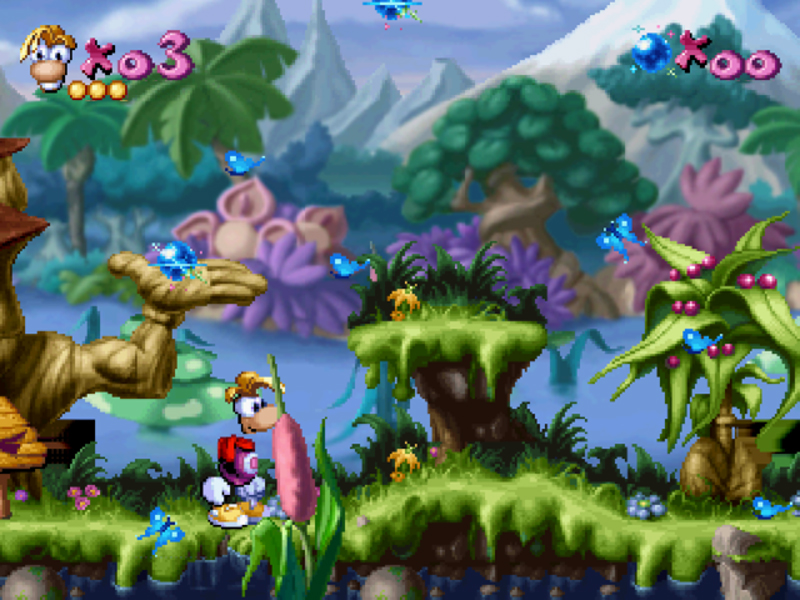 It's hard to find fault with this excellent 2D platformer. Rayman is a cartoon character whose hands and feet are not connected by arms or legs (they just float). It sounds odd, but it gives him a unique look and allows for some interesting animations. The game combines the slow, deliberate gameplay of Super Mario Brothers with the lush colorful graphics of a Sonic the Hedgehog game. The animations are incredibly smooth and often humorous.

Rayman starts off like a simple platform jumper, but as he gains new abilities like punch, hanging from ledges, or flying like a helicopter, the challenges become more complex and intense. Rayman has its share of innovations too. Your shooting fist works like a boomerang. You can instantly grow huge flowers to help you reach high ledges. Huge pieces of fruit grow on trees, and you can use them to clear your path or float across water. Besides collecting items, you'll free caged creatures and face huge bosses. The collision detection is very forgiving, but sometimes you can't see the ledge you need to jump to.

The lush stages are works of art, bursting with color and teeming with life. Likewise, the music is upbeat and fun. Like Super Mario Brothers, there's a map screen that allows you to choose your stage and revisit old ones, and you can save your place between stages. The stage designs can be frustrating, but I found this version easier than the Saturn edition. Fun and highly replayable, Rayman is easily one of the better Jaguar titles. © Copyright 2003 The Video Game Critic. 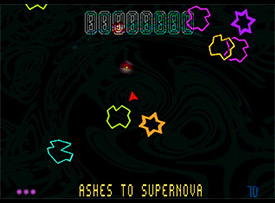 You don't see many new Jaguar titles so a game like Rebooteroids is easy to get excited about. Its glossy black box sports classic Jaguar styling and the instruction manual is made of high quality stock. The game itself has just about everything you'd want in an Asteroids "reboot" including power-ups, innovative play modes, futuristic music, and saved high scores.

Although colorful and well defined, its graphics are unexceptional. The impact of your shots on asteroids looks soft and the explosions are understated. Those star-shaped asteroids look kind of cheesy. The audio includes a sexy woman's voice that sounds remarkably clear and techno music that's uneven in quality. What makes Rebooteroids such a blast is its rapid-fire shooting! The fact you can just hold in the fire button to unleash a steady stream of shots is a real game-changer! The only downside is that these asteroids can absorb multiple shots.

Most power-ups aren't worth pursuing but the double-shot does kick ass. All power-ups are short-lived, expiring at the end of each round. The collision detection is forgiving (especially around the nose of your ship) and I love the witty commentary ("rock beats spaceship"). One flaw with the game is its frequent reuse of a certain ship-scaling animation. When your ship grows large you don't know if you've been destroyed, completed the round, or accidentally hit hyperspace.

The primary game mode puts you up against waves of asteroids in preset formations, but it feels gimmicky and the bonus waves are tedious. I prefer the "skirmish" mode which plays more like classic Asteroids. The two-player co-op mode caught me off-guard, with one player driving the ship while the other fires a small red "turret" on top of the ship. That is awesome.

The rotary controller is supported, and it makes all the difference. Unfortunately sometimes the game doesn't recognize this special controller and I have to fiddle with it. Rebooteroids never quite reaches the heights of Tempest 2000 (Atari, 1994) but for Asteroids fans this is an easy purchase. © Copyright 2017 The Video Game Critic. 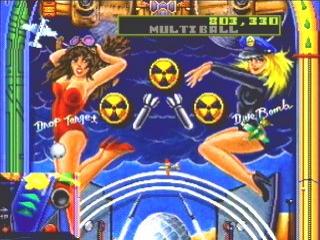 Wow, this game caught me off-guard! I must admit I was expecting some pretty shallow pinball action along the lines of Pinball Fantasies, but Ruiner just blew me away. There are two completely separate tables, and either is well worth the price of admission. The first, simply called "Ruiner", has a war theme with all kinds of missiles and airplanes flying around. It's really two tables wide, with two levels of flippers on each side. The high-resolution artwork includes some patriotic babes that will definitely catch your eye. As you advance from DEFCON 1 to 4, the table reveals new targets.

The second table, "The Tower" is a whole new pinball game altogether. This one has an occult/medieval theme that's just incredible. It's a lot like Dragon's Fury (Genesis) or Devil's Crush (Turbografx-16), but this one is even better. The table is very tall, with three levels of flippers. The fantastic graphics include eyeball bumpers, pools of blood, a chained prisoner, dragons, a sorceress, and a tower at the very top. Besides all the standard pinball gadgets, both tables unleash loads of moving targets like planes and bats.

The screen scrolls smoothly as the ball zips around realistically, and the table scales out nicely when multiple balls are put into play (oh yeah!). You can nudge the tables, but it's very easy to tilt, so be gentle. All high scores (and settings) are automatically saved to the cartridge. If Ruiner has one weakness, it's probably the lame background music. It's pretty sparse and you probably won't even notice it. Overall, Ruiner Pinball is an underrated game, and I'd definitely recommend it to any Jaguar owner. © Copyright 2002 The Video Game Critic.