Hang On was a game built into the Sega Master System 2 consoles. It's a motorcycle game that looks and plays suspiciously like Pole Position, which came out many years prior. The steering is good; I felt in control even in traffic on curves. I did have a problem accidentally shifting gears when I was trying to turn however. The graphics aren't so hot. The other motorcycles all look the same. When your bike crashes, the explosion is ridiculously small. The road moves smoothly, and the other riders scale in and out pretty well, but there's not much to see.

There are some tiny background graphics on the horizon, but there's not much on the side of the road except for some bushes and rocks. Each course has several stages which abruptly change the background and color. The first few stages are fairly plain, and the last two look just awful. There's a pathetic "city night" stage with miniature street lights and buildings that never get closer, and the final stage is just like the first, except everything is orange! What the? There are three skills levels to keep the game challenging. Despite some unimpressive graphics, Hang On provides some decent racing action. © Copyright 2001 The Video Game Critic.

Joe Montana finally gave the Master System the respectable football game it so desperately needed. With its side-angle view, the game looks and plays much like the highly acclaimed Tecmo Bowl (NES, 1986). Selecting plays is easy enough, but the names are utterly bizarre. What the heck's a Subdural Hematoma? It sounds like a proctology procedure.

As for the passing game, I like how you can easily select receivers, but the ball tends to float, so by the time it arrives defenders have already moved into position. Incomplete passes often bounce off the receivers' hands, which looks pretty cool. The running game is weak. You have to press a button just to hand the ball off, and you can forget about busting out a big gain. As for the kicking game, Joe Montana does a lousy job of indicating the ball's position in the air. During field goals, the shadow always passes through the posts, but the ball never appears to do so.

Joe Montana won't win any awards for audio either, with its cringe-worthy crowd noise and tackles that sound more like flatulence. Did all of the players drive-thru Taco Bell on their way to the stadium? Finally, I really wish there was some type of half-time show. Joe Montana Football is no classic, but if you want to play football on your Sega Master System, this is clearly your best option. © Copyright 2005 The Video Game Critic. 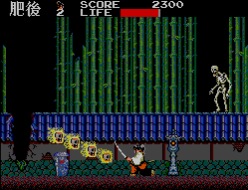 Here's a colorful samurai title that lets you jump and slash your way through an ancient Japanese kingdom. The vibrant graphics feature sharp, high-resolution characters and rich scenery. An engaging soundtrack plays complex melodies with ominous undertones. I typically enjoy games like this, but Kenseiden goes out of its way to make you miserable. In the first stage you approach a temple at night while being accosted by giant beetles, rickety skeletons, swooping birds, and monkeys that hop all over the place. They're freaking me out man!!

Upon arriving at the temple you'll contend with giant spiders, flying skulls, and mace-swinging guards. Your movements are stiff, which makes it hard to properly position yourself to slash these creeps. It's bad enough the way creatures materialize out of nowhere and knock you off ledges, but after defeating them, they regenerate! Cheap, mandatory hits are the order of the day. What's a young samurai to do? Run! Run like the wind! If you're lucky you'll find a "safe zone" where you can catch your breath.

The first boss is a flaming wheel, and it's insanely hard to beat. Collectible scrolls augment your abilities, but there's no magic or special moves to give the game depth. I wish I could say the later stages are worth the effort to reach, but the nondescript caves and mountain sides are pretty unexciting. Kenseiden's visual and audio quality is beyond reproach, but its stiff controls and unforgiving gameplay will drive gamers over the edge. © Copyright 2010 The Video Game Critic.

This primitive side-scroller is extremely Japanese, which is a nice way of saying it's super weird. Its colorful graphics feature temples, bamboo forests, and a lot of traditional Japanese artwork (read: bright red). The soundtrack also has an appealing Japanese twang to it. As you move forward you're accosted by an endless parade of mindless henchmen, hopping vampires, and creepy dolls. The characters in this game are tiny and seem to constantly regenerate. In addition to unleashing flying kicks, our diminutive hero can toss playing cards at his enemies (I'm told it's a Japanese thing).

The fighting can get tiresome, but there's a trick to this game. It didn't take me long to figure out that jumping forward is faster than walking. This led me to hop continuously through each stage in an attempt to avoid confrontations altogether. I had so much luck with this strategy that I actually felt a little guilty about using it! Just be sure to avoid that dripping water! As anyone familiar with classic games will tell you, water was deadly to the touch back in the 1980's!

Equally dangerous are the hodge-podge of bosses who include a flying witch, a giant orange frog, and an acrobatic duo. Dying at the hands of a boss sends you all the way back to the beginning of the stage, and I don't like that. Kung Fu Kid is simplistic and doesn't make any sense. I'd like to call it "so bad it's good", but in this case it leans more towards "bad". © Copyright 2011 The Video Game Critic. 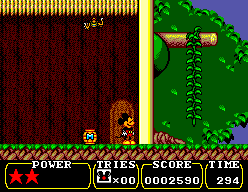 This sequel to Castle of Illusion starring Mickey Mouse (Sega, 1990) has the same look and feel, except with fresh stages, new enemies, and less memorable music. In Land of Illusion Mickey hops between spider webs, climbs a hollow tree, swims in a lake, and explores a castle. Unlike the first game there's no stage select (*sad face*). Equally disappointing is how you begin with only two stars (of life) instead of four! Considering how easy it is to take two hits in a row that's pretty harsh!

The first stage has these irritating whirlwinds that carry you through the air. You'll grab a vine when you don't want to and not grab one when you do want to. But for every annoyance there's a charming scene, like feeding an apple to a giant snake so he'll let you pass. The lake stage is my least favorite, with water rising and falling over a spiked sea bed. If that's not bad enough, there are prickly green things floating on the surface! I felt as if I needed to collect every health icon just to compensate for all the mandatory hits!

The game gets back on track in the blacksmith's castle stage, where you're forced to keep moving as spreading flames nip at your heels! Land of Illusion has a better flow than the first game, with shorter stages and less tedious puzzles. That helps make up for some of the more frustrating aspects of the game. I was expecting this sequel to be better than Castle of Illusion, but I'm thinking it's a wash. © Copyright 2018 The Video Game Critic.

This is an underrated vertical shooter that lets you blast through enemy territory in a jeep, boat, and helicopter. Line of Fire plays a lot like Rambo except you're constantly moving forward. Even the music sounds similar. Line of Fire's six relatively short stages take you through a variety of environments including a jungle, river valley, and a rocky gorge. You can rapidly fire a machine gun (forward only) to mow down enemy soldiers which look more like orcs from Lord of the Rings. You also have a limited supply of missiles you can guide through the air to take out helicopters and jet planes.

Line of Fire is a little slow but very challenging and fun. Enemy mortars have a wide blast radius so even if you avoid a direct hit you'll need to keep your distance from the ensuing explosion. Stay alert for enemy trucks that sneak up from behind in the jungle stage. The explosion effects are tame but I love the way bridges collapse into the water in the river stage (a la River Raid). Line of Fire is a decent 2D shooter, but it really shines in 3D.

Although the 3D feature is not advertised, it's activated if you hold in both buttons on the controller while turning on the system. Fortress walls rise up high, trees loom, and the canyons appear to be perilously deep. Since enemies attack from air and ground, the 3D effect makes it easier to tell which enemies you're "lined up" with. Certain projectiles seem to be on the wrong plane (they can always hit you), but in general the visual effect is fantastic. Line of Fire is worthwhile in 2D but it's a must-have title if you own the Sega 3D glasses. © Copyright 2011 The Video Game Critic.

Here's an appealing D&D-style adventure with a Lord of the Rings flavor. Three tasks have been set forth for your warrior to complete: Seek out the Tree of Mandrill, defeat the goblin of the Balala Valley, and destroy the Statue of Evil. Lord of the Sword is more sophisticated than your garden variety side-scroller. You explore a world with branching paths, talk to various characters, and carry up to three items at a time.

The diverse scenery includes meadows, mountains, dark forests, bridges, castles, and townships. Each area is relatively small, and that's good because some backtracking is required. Monsters attack early and often in the form of floating eyeballs, leaping wolves, bobble-headed skeletons, and scampering scorpions. You're so unpopular that even fish leap out of water to bite you! Each enemy attacks with a distinctive pattern, and you'll quickly learn how to contend with each.

I like how you can lure certain creatures (like scorpions) into pits where they become stuck. You can slash with your sword and shoot an unlimited supply of arrows with your bow. The bow is slow to load and shoot, but it comes in handy against those spore-flinging Straw Flies. The gameplay is slow and methodical, and it's easy to get lost in the maze of pathways.

Lord of the Sword's graphics are better than average, and your character is rendered with impressive detail. The monsters look great, and I especially love those hovering red demons with the glowing eyes. The looping soundtrack is okay, but bound to get on your nerves after a while. The game offers ten continues. Lord of the Sword requires a bit of patience, but those who can deal with its slow, deliberate pace will be rewarded. © Copyright 2010 The Video Game Critic.