It would be hard to find a more vanilla light gun shooter than Marksman Shooting/Trap Shooting. This unimaginative two-in-one package makes Duck Hunt look like Time Crisis. In the Marksman Shooting portion you aim at people-shaped cardboard cutouts moving across a room. You score more for hitting targets in the red dot in the chest. The room has a weird network of broken pipes which are probably meant to convey depth.

There are seven rounds but each one is pretty much the same. It gets pretty boring! After each round you get a breakdown of your performance and are treated to a jaunty little tune. In the Trap Shooting portion you shoot down clay discs launched over a green meadow. Unlike Marksman Shooting, you don't advance to the next round unless you hit a certain percentage of targets, so there's a little more challenge. If you do reach the later stages, the scenery changes to a beach with waves magically frozen in place.

In terms of controls, no calibration is required and the aiming is pretty accurate. Then again your mileage will vary depending on the size of your television and the distance you're sitting from it. If you're just looking for some target shooting action for your Master System, this cartridge will serve its purpose, but it's pretty bland. © Copyright 2012 The Video Game Critic.

At its core, this is just another generic scrolling maze game where you collect items, fend off creatures, and seek the exit. It's tempting to write off, but I have to give Maze Hunter a lot of credit because the 3D aspect is totally convincing! The action is viewed from overhead, with tiered platforms of various heights and portals that let you move between them. The illusion of depth is surprisingly effective, especially the way the walls rise up around you.

The stages include a space ship, volcano, ice planet, and a lush garden. There's nothing spectacular about the levels, but excellent use of color and texture makes the scenery look rich. Small enemies include green balls of pain, sea urchins (my interpretation), and giant atomic particles. You can beat them with a club or shoot them after you snag a power-up. Bonus items can be found in balloons, and it looks pretty amazing to see one floating over the action. You also have the option to leap over enemies, and the illusion of jumping into the air is very cool.

Even the soundtrack is likeable, featuring a looping refrain that just keeps coming back again. The problem with Maze Hunter is replay value. While it's fun to conquer the early levels at first, having to work through them every time you play can be tedious. Your inability to aim diagonally is a minor annoyance, but overall Maze Hunter is a heck of a lot more entertaining than its name would imply. Note: This game requires the Sega 3D glasses. © Copyright 2011 The Video Game Critic.

When you combine the simple fun of light-gun shooting with Sega's 3D glasses, the result has to be awesome right? The answer to that question is a resounding yes. Missile Defense 3D is more intense than most light gun shooters because the fate of a city is in your hands! Each wave of incoming missiles plays out over three screens. The first depicts a launch facility that lets you pick off missiles just as they're taking flight. Don't worry if a few get through, because you still have two more chances.

The second screen shows an overhead view of a polar landscape, and it's neat to watch the missiles glide over ice formations and meander through deep crevasses. The final screen is your last chance to shoot down the remainders as they approach the city. If successful, the next wave features a whole new set of screens, including an astonishing view from space with missiles appearing on the horizon.

The 3D effect in this game is sensational and the light gun is dead-on with accuracy. After the first two waves, the missiles start turning on you, increasing the difficulty dramatically. Missile Defense 3D is a very cool experience that pushes the Sega Master System into virtual reality territory. Note: This game requires both the Sega 3D glasses and light gun. © Copyright 2011 The Video Game Critic.

Let's get something straight up front: If you want to play Monopoly with another person, you do NOT want to play it on a video game system. Buy the board game for Pete's sake! On the other hand, if you can't find anyone else willing to play this tedious, long game, then this version will provide plenty of computer challengers. I'm not a big fan of Monopoly, but found myself playing this game longer than I thought I would. From what I've seen, you can do just about anything in this version that you can do in the real game.

The main screen provides an overhead view of the board and critical stats for all players, but it's difficult to make out the tiny pieces and houses. Fortunately, when a piece moves you get treated to a nice scrolling close-up of the board. There are a few little animations (like going to jail), but overall there's nothing fancy here.

The menus are well-designed so you can make your decisions without a big hassle. One nice feature is the "speed up" button, which speeds up the game during the computer's turn. Another useful feature turns off that annoying music (thank you!). It won't replace the board game, but this version of Monopoly is a respectable one-player game. © Copyright 2000 The Video Game Critic.

It's evident that this game was ported from the arcade by the fact that it's so incredibly HARD. If you can stay alive for over a minute, you're doing a good job. You actually earn points for each step forward, which underscores the difficulty. The premise of My Hero is as corny as its name. A thug with a Mohawk has taken off with your girl, and you have to battle wave after wave of lowlifes to get her back. You also need to dodge bombs and bottles dropped from windows.

Your character looks like a big dork in a blue prom tux. He can jump, punch, duck, and kick, but his best attack is the flying kick. When you strike an enemy, he flies diagonally off the screen. What makes the game so hard is that one hit (touch really) will kill you instantly. There's little room for error, so when you accidentally duck instead of kick, you'll pay the price. Still, there's something to be said for arcade-style games like this. It has an addictive quality that keeps you coming back. © Copyright 2002 The Video Game Critic.

Find My Hero on eBay, Amazon, YouTube
Copy link to this review
Our high score: 51550
1 player
If you like this game, try: Deadly Duck (Atari 2600),
Astro Battle (Bally Astrocade), Shantae (Game Boy Color),
Dragon Wang (Sega SG-1000), Room of Doom (Atari 2600)
Ninja, The
Grade: B
Publisher: Sega (1986)
Posted: 2001/2/11
I really got into this game. You are a ninja attempting to infiltrate a palace and save a princess. You're equipped with throwing stars and the ability to become invisible temporarily. As you progress up the screen, you'll pass through various locations, each offering a unique challenge. Enemy ninjas come out of the woodwork. If you see a rock, chances are it's about to transform into a ninja (don't ask). And these guys are equipped with an arsenal of weapons. In order to keep them from ganging up on you, it's a good idea to retreat momentarily to keep them in front of you.

One button on the controller throws stars forward, and the other allows you to direct your throws. Pressing both buttons activates your cloaking device, which comes in very handy in tight situations. I really like the graphics, except for the recurring boss who looks like Ernie from Sesame Street. Also, the attack dogs seem to turn into people when they die (lazy programming?). The up-tempo background music is pretty good, and when stars collide they make a satisfying "clank" sound. Good control, colorful graphics, and a cool cloaking device add up to a fun game. © Copyright 2001 The Video Game Critic.

Out Run is a classic pick-and-up-play racer but this Sega Master System version is flawed. I can deal with scaled-down graphics and meager audio, but poor controls are harder to defend.

The gameplay is pure pedal-to-the-metal action as you weave through traffic in branching stages that really beef up the replay value. The opening stages takes place in a tropical location where you're treated to views of beaches, palm trees, and surf huts. Subsequent stages boast diverse scenery and striking color schemes.

You get a selection of background tunes to choose from including Passing Breeze, Splash Wave, and Magical Sound Shower. The graphics are respectable but my friends were disappointed to see the passengers do not eject from the vehicle when it rolls. I also noticed the junctions between stages are too long. Once you hit the fork you'll think you're home free, only to wait forever for that checkpoint to arrive!

But the biggest issue is the gear shifting. You'll need to remain in high gear most of the time to reach the next stage. Approaching the next checkpoint as the timer ticks down is the most exciting part of the game. Don't be surprised however if you look up and notice you're back in low gear. Apparently when steering, hitting the diagonals on the control pad is enough to inadvertently downshift, and there's no audible indication this has occurred. That sucks.

My nephew Luke devised a crafty solution which is to steer using the lower half of the control pad, curling it left or right. That's clever but you shouldn't need to jump through hoops like that. This game may convey the happy-go-lucky vibe of the arcade, but there are better versions of Out Run out there. All of them, I think! © Copyright 2022 The Video Game Critic. 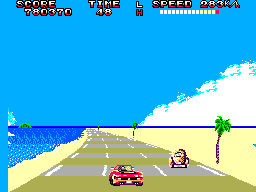 The "normal" Out Run (Sega, 1987) was a modest port but this 3D version is a completely different experience. It's like night and day. My buddy Steve described this game's illusion of depth as "amazing" and my young nephew Luke called it "a lot better than I expected."

Despite some slight flicker, the 3D dramatically enhances your ability to gauge distance, making it an absolute blast to weave through traffic. But they also improved the game in other, more subtle ways. There are now three skill levels and three new selectable tunes. The starting line looks more festive and you can see more the beach on the left side in the opening stretch.

The junctions between stages are much shorter now, giving you a far better shot at beating the timer. And then there are the lighted tunnels. My friend Chris practically fell out of his chair when he found himself driving through one of those! If that's not impressive enough, storm clouds roll over you like a freaking wave! This version packs extra sound effects like cars passing, but still no downshift alert.

That's right - it's still too easy to accidentally switch to low gear - the Achilles' heel issue of the original version. Otherwise Out Run 3D is a technical marvel and a must-own for fans of the franchise. It wasn't released in the states, but this European version will run fine on your North American system, assuming you have the required 3D glasses. © Copyright 2022 The Video Game Critic.