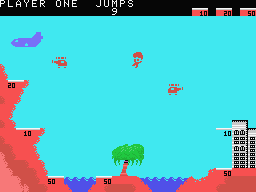 Originally a black-and-white coin-op published by Exidy in 1979, Rip Cord was one of those games advertised on Coleco boxes and catalogs that never saw the light of day. Until now. With nothing to go by but an artist-rendering from an old catalog, programmer Russel Kumro has effectively resurrected this long lost artifact. He did a bang-up job. This is pretty terrific.

As soon as I spotted the colorful screenshot of this game on CollectorVision's site I fell in love with its graphics. The bright blue sky, palm tree, and fancy hotel instantly put me in the mind of summer! And the 12-year-old in me still thrills to these vintage, arcade-quality visuals.

Fire up Rip Cord and you'll be stunned by the amazing rendition of "Jump" playing over the title screen. My friend Eric noted that since the game was originally released in 1979, Van Halen totally ripped off this game! Either way, it's great fun to kick back and listen to.

Rip Cord is very easy to play, calling to mind the much less-sophisticated Sky Diver (Atari 2600, 1978). A blue plane flies over what appears to be an exotic resort with soaring red cliffs, a posh hotel, and an inviting blue harbor. Pressing a side button makes your tiny man jump from the plane, diving towards the ground. Pushing the button again deploys your parachute, and while floating down you can guide yourself slightly left or right.

Making the game challenging are helicopters buzzing around the sky in unpredictable patterns. You'll need to time your jumps carefully, remaining in dive position until you reach a safe zone to deploy. It's great fun to "thread the needle", missing the whirling blades of a copter by the skin of your teeth. The only thing missing is a timer. You could wait all day to jump.

There are six landing pads of various point values, and you'll need to hit one worth 10, 20, and 50 points before you advance on to your next mission. The screen layout doesn't change between missions (sadly) but additional helicopters join the fray. It's not very deep but if you're in the mood for a quick thrill Rip Cord has got you covered. © Copyright 2022 The Video Game Critic.

Roc N Rope was a minor arcade game that pushed the Donkey Kong formula a little too far. Instead of climbing ladders, your man shoots ropes diagonally between cliffs, then climbs them to higher ground. Monsters lurk in caves on the cliff faces, and they will either shake the rope, or climb down after you. To defend yourself, you have a flashlight that temporarily stuns them. If you make it to the top of the screen, you'll rescue a magic egg and move on to a tougher level. Subsequent levels include elevators and more complicated sets of platforms. I can see why Roc N Rope never really caught on. The controls have a steep learning curve and the game lacks personality. © Copyright 2001 The Video Game Critic.
Find Roc N Rope on eBay, Amazon, YouTube
Copy link to this review
Recommended: 2
High score: 16340
1 or 2 players
If you like this game, try: Roc 'N Rope (Atari 2600)
Donkey Kong Junior (Colecovision)
Donkey Kong Jr. (NES)
D2K Arcade (Intellivision)
Donkey Kong Junior (Atari 2600) 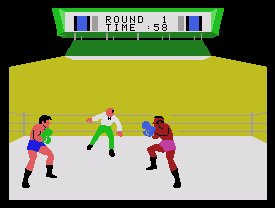 If you were a kid seeing this game in the 1982 Sears catalog you'd think it was too good to be true. Instead of the tiny, pixelated characters, Rocky boasts huge, lifelike renderings of Sylvester Stallone and Mr. T facing off in the boxing ring. There's even a bow-tie-wearing referee, constantly jostling around to maintain a good vantage point. To this day I am astonished by this game.

You need to whip out those oversized Super Action controllers to play this one. Upon starting a new match you're treated to a screen-sized digitized image of Rocky! Though stunning in 1982, the use of day-glow colors tend to undermine his toxic masculinity. The Rocky theme however sounds so awesome I just want to put down the controller and start working out!

Like most Colecovision sports titles there's a price to be paid for the bleeding-edge visuals. I like the idea of being able to position my boxer around the ring, but your movement is extremely sluggish, almost to the point of feeling unresponsive. There are two punches that don't generate much power. Whenever I land a punch the CPU opponent immediately jabs me back. Ducking and blocking aren't very effective. The action feels more like rock-paper-scissors than cat-and-mouse.

Occasionally the fighters will clench, prompting the ref to break them up. The animation becomes stilted when a knock-down occurs, but I like the drama of watching a fighter trying to return to his feet. The crowd occasionally sounds like people are cheering, but the cat-call whistles seem strangely out of place. Each fight ends with the victor donning a belt in the ring, raising his arms in victory.

I play most Colecovision games on variation three (arcade level) but in this case you'll want to dial it down. The rounds are short but the idea of going more than three is painful. Rocky is a showcase title - no doubt about that. But if I'm going to be honest it's more fun to watch than play. © Copyright 2022 The Video Game Critic.