Good Console Design 101:
The BEST Console Features
of All Time

By The Video Game Critic

I cataloged some of the worst console design practices in my Bad Console Design 101 page but I think it's only fair to examine some of the best design features as well. Here is a list of some of the more ingenious, well-implemented ideas successfully incorporated into our video game consoles over the years. 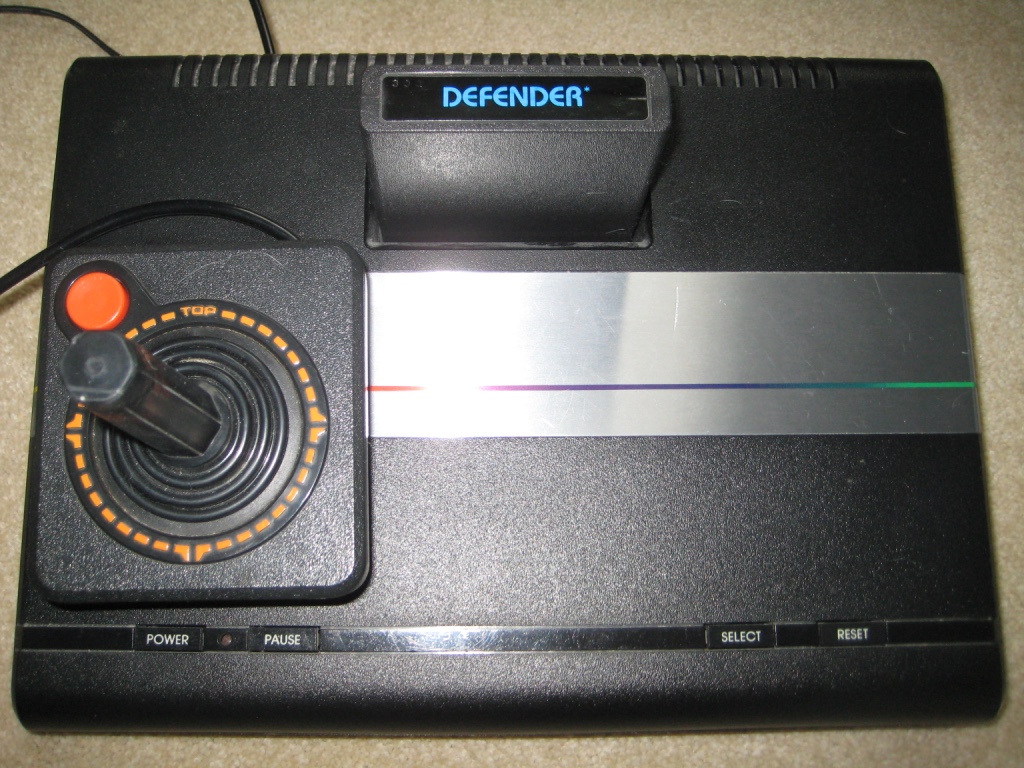 The Atari 7800 may not have been a runaway hit but Atari had the right idea in making it backwards compatible with Atari 2600. Not only could this system run all the old classics, but you could even use your favorite Atari 2600 controllers as well. It was one of the few things Atari did right at the time but it was not enough to save the dying brand. 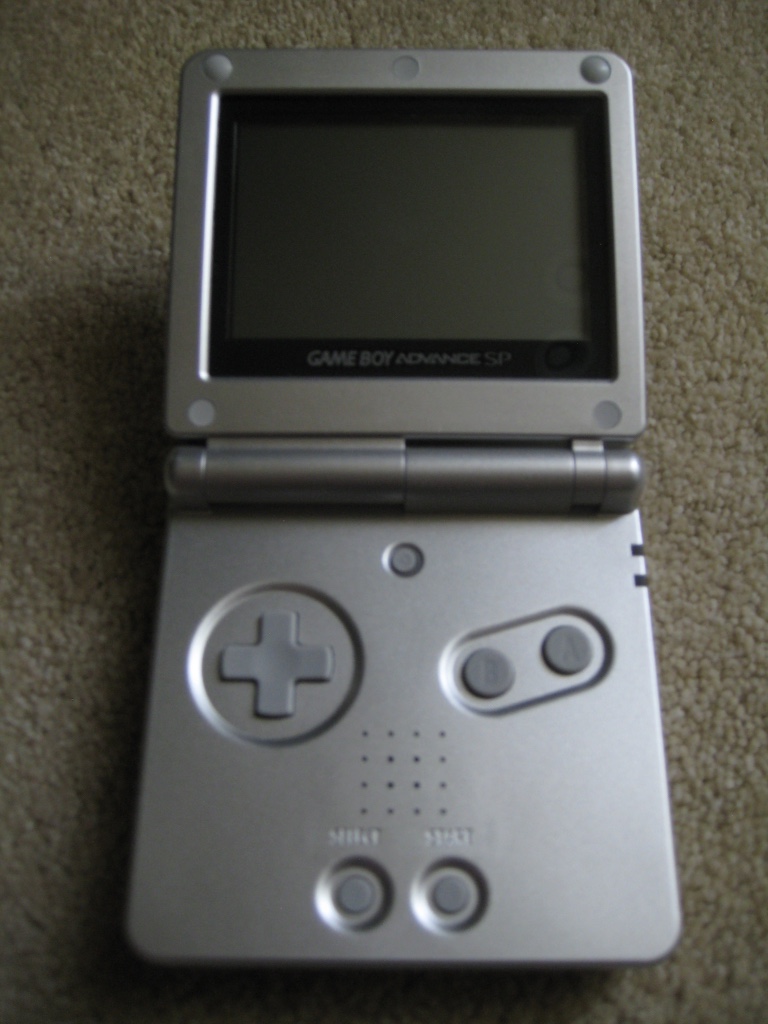 Unlike the original Game Boy Advance which had all the sophistication of a Fisher Price toy, the Game Boy Advance SP was both functional and attractive. Silver, sleek, and compact, it was the video game equivalent of a fancy sports car. A fancy sports car you could fold up into a little square and carry around without fear of scratching its bright, back-lit screen. Even the buttons feel good. This may well be the best-designed portable ever made. Now about that headphone jack... 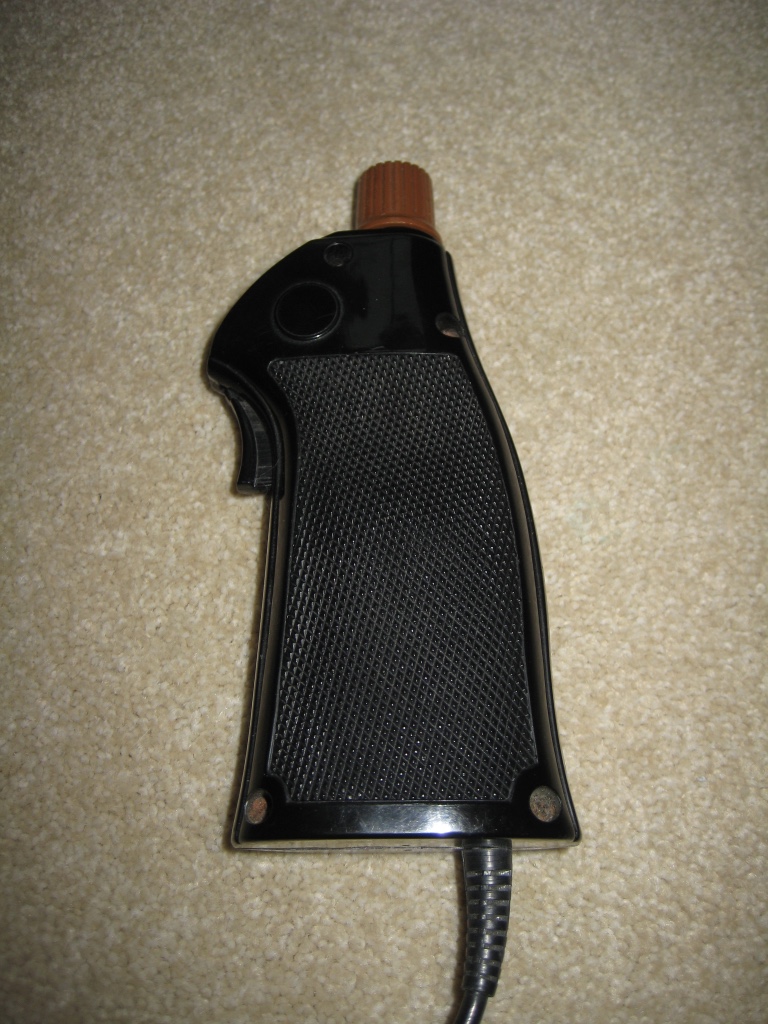 At a glance this is one hideous piece of plastic. An ugly grip with a brown knob on top, the Astrocade controller might just be the worst-looking ever devised. But to use this controller is to love this controller. The grip perfectly molds to your hand, the trigger feels natural, and that knob on top is remarkably functional. It serves as a joystick (move in any direction), paddle (twist), and even a secondary button (push in)! If you've never tried this controller you may want to put it on the bucket list. 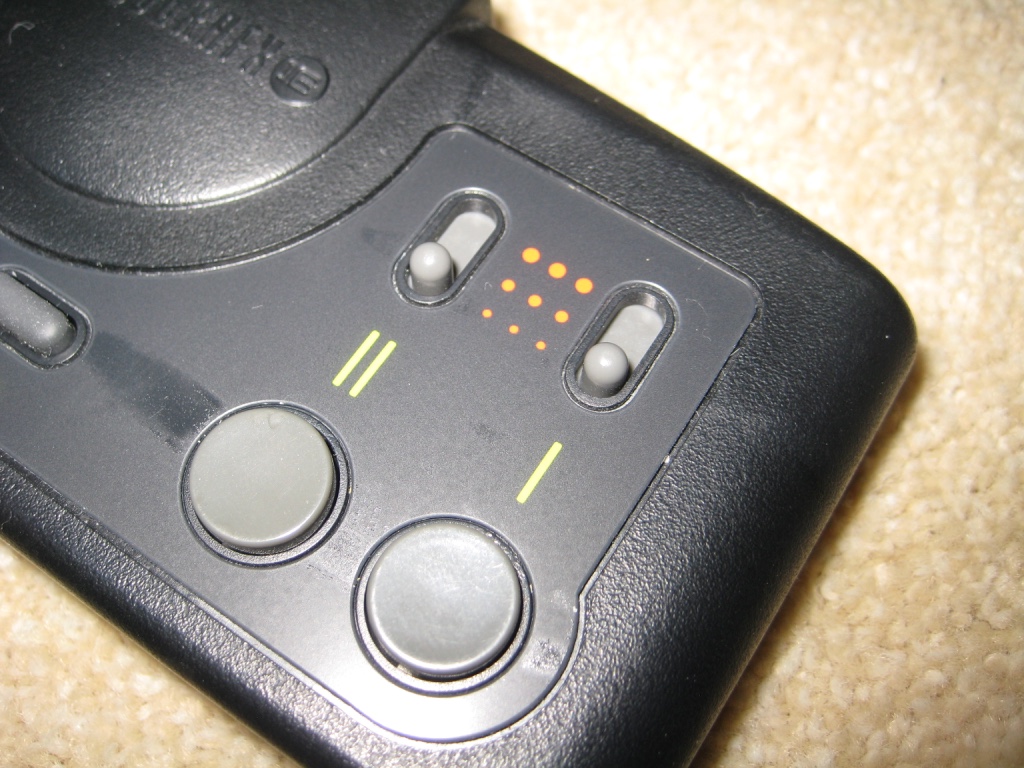 Some many consider turbo switches a novelty but they really helped differentiate the Turbografx-16 at a time when the system needed an edge. These switches simulated the rapid tapping of buttons, saving your fingers from a lot of repetitive stress. Although the switches were featured on earlier controllers like the NES Advantage, this was the first time they were included on a standard controller. And it proved a good fit too as the Turbografx library was loaded with shooters and other games condusive to constant button tapping. 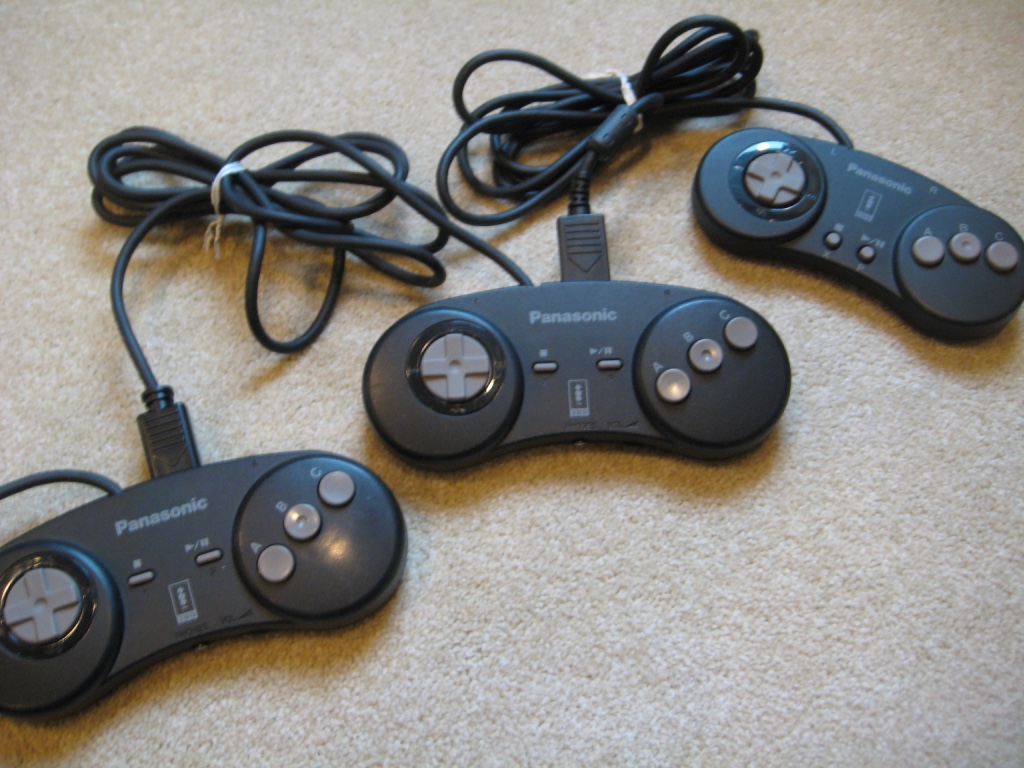 This may seem like an odd entry, but hear me out. The 3DO machines only had a single controller port, which seemed ludicrous for a console released in the early 90's. In fact the system actually supported up to eight (!) controllers at a time using their unique "daisy chain" approach. This was made possible by the fact that most 3DO controllers had a port incorporated into them (usually on top), allowing you to chain controllers together. It sounds crazy but in practice it works really well, especially when trying to play a multiplayer game like FIFA. 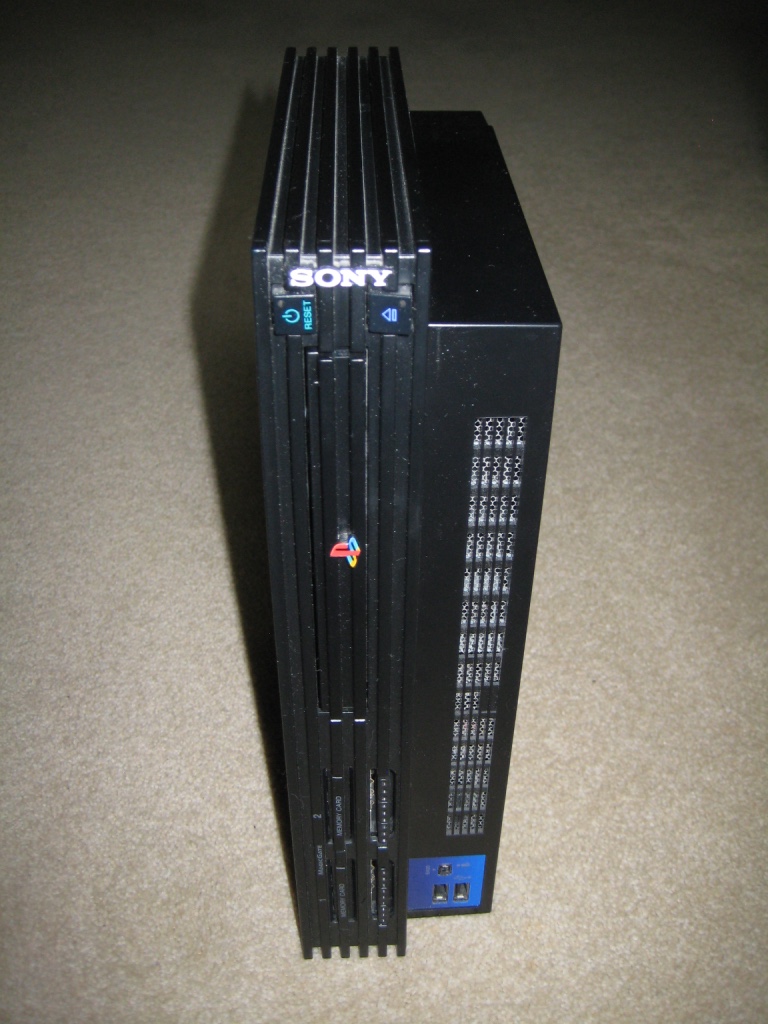 I always loved the overall design of the PS2. The system was distinctly asymmetrical and reminded me of the Sears Tower. Better yet, it could be situated sideways or upright, performing fine either way. I'm constantly changing my game room setup and it's great to have this flexibility. 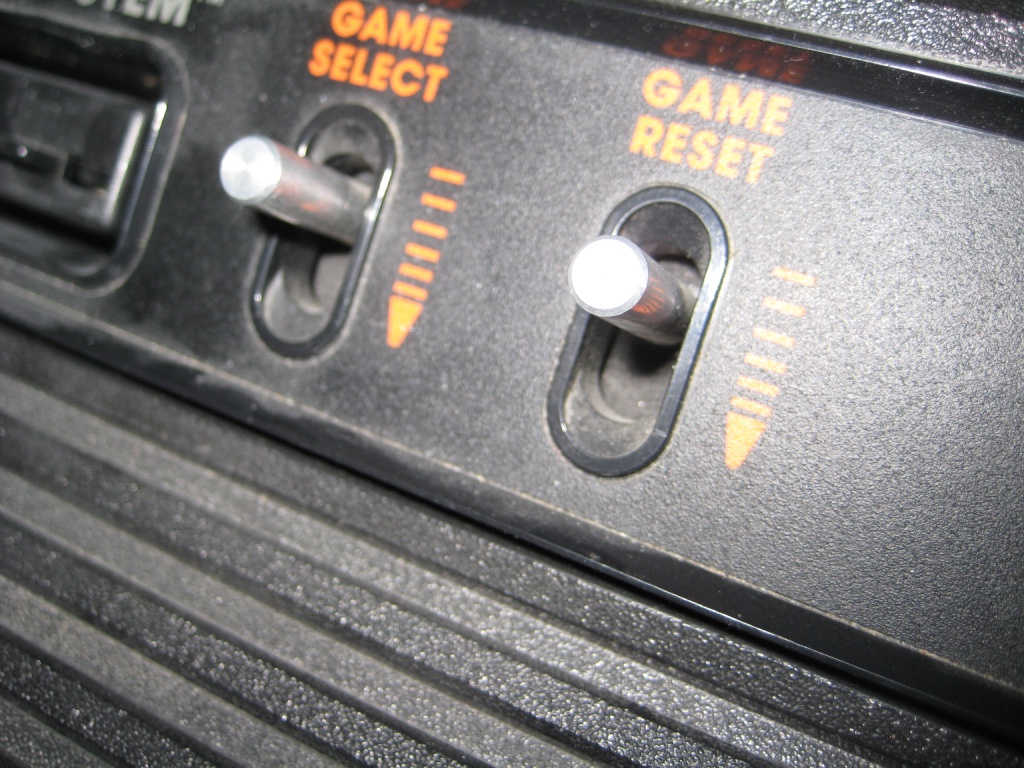 One of the joys of retrogaming lies in using old systems with clunky controls and physical switches. None of this "hold in this button for 4.3 seconds" garbage. And the king of switches was the Atari 2600. There were six switches (four in later models) lining its face, and they not only look cool but are fun to tinker with. They have a distinctive tactile feedback and have proven sturdy enough to withstand gaming for 40 years and counting. 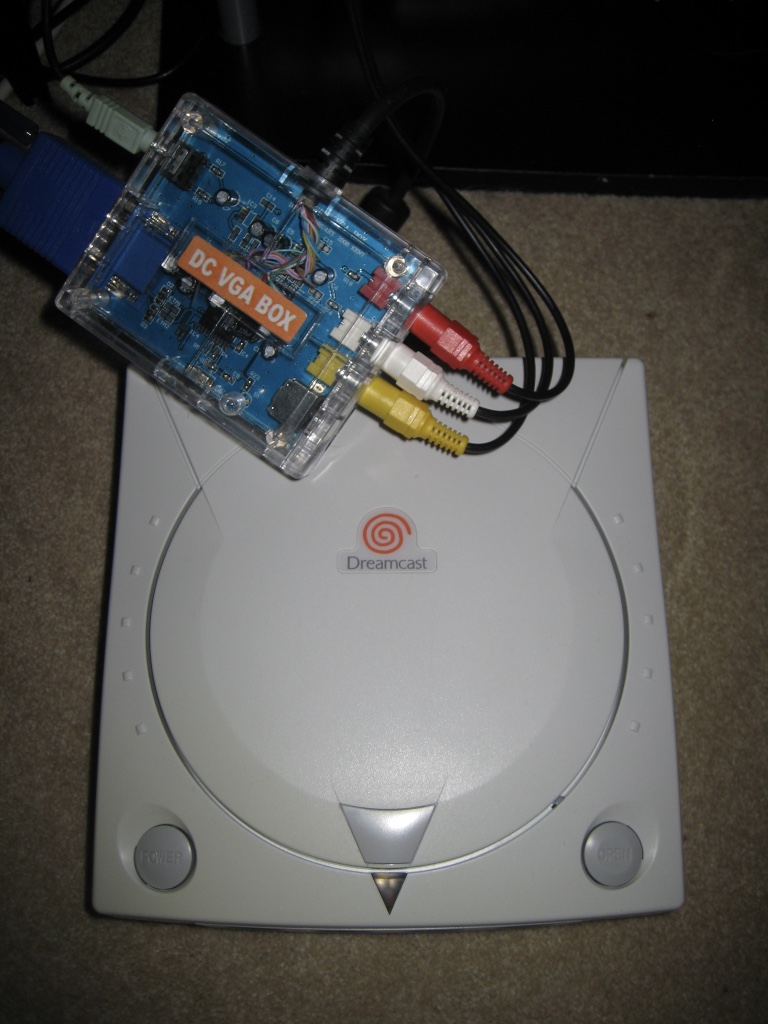 I didn't pay it any mind back in the day, but 20 years later I'm still reaping the benefits of this thoughtful feature. The Dreamcast was the first console to support VGA output, allowing for the most crisp, high resolution available. An inexpensive VGA Box provided sharp, HD-quality graphics long before people owned HDTVs. And while there are alternatives today (like HDMI), VGA still remains my preference when using the system.

#10 Xbox One Suspend and Resume 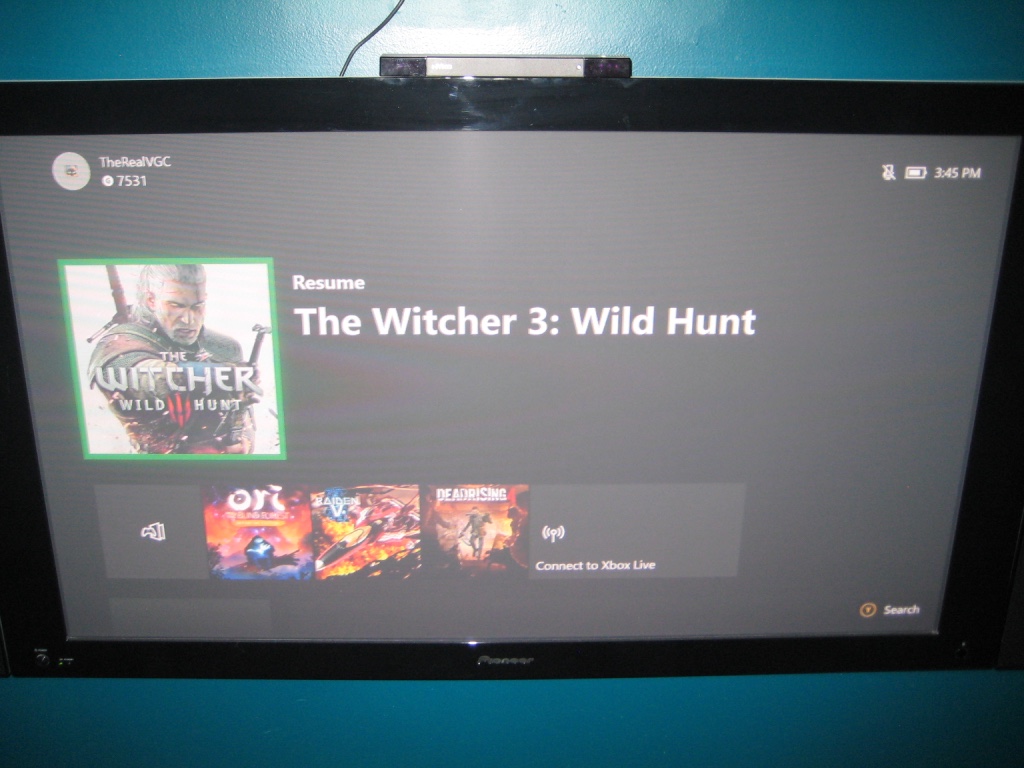 One nagging issue with modern games is their lengthy start-up times. From the time you select a game to actually getting down to business it could easily take a few minutes. But the Xbox One had a surprisingly elegant solution. When you shut down your system and restarted it, it picked up exactly where you left off in a game. I initially discovered this by accident and couldn't get over what a time saver it was. The other consoles soon caught on, but I'll give Microsoft credit for making it standard. 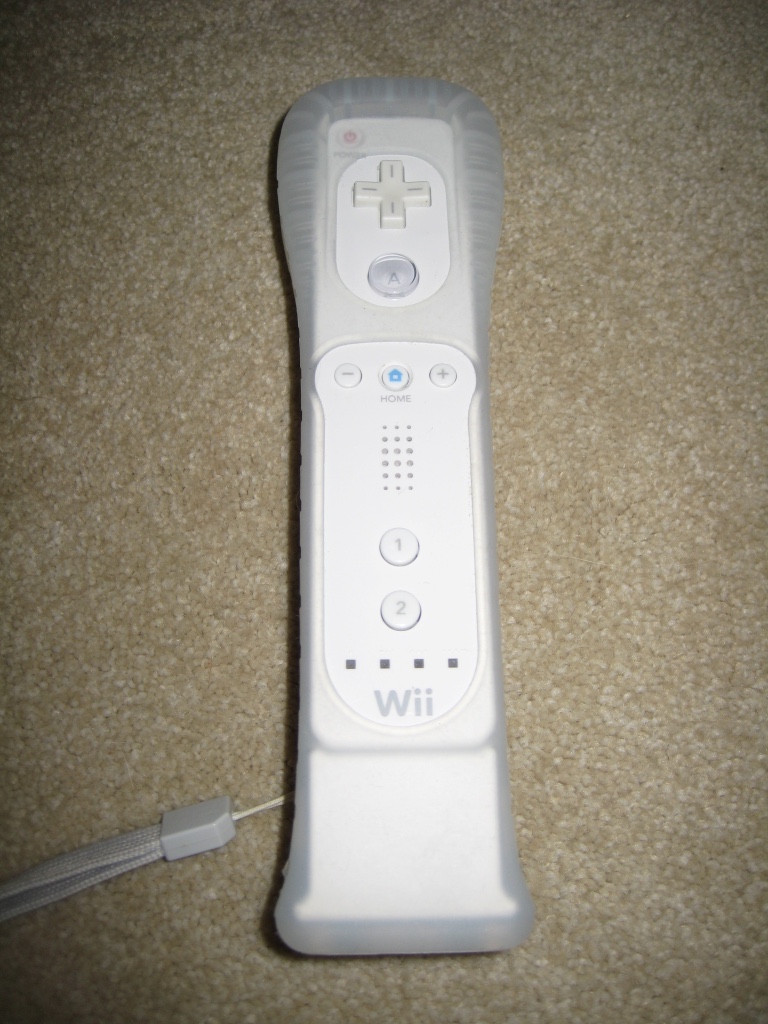 In 2006 the Wiimote controllers were some revolutionary hardware, allowing players to control a game using their own natural body movements. You could aim at the screen to grab to an object. You could swing the controller to punch, or angle it to steer a car. The possibilities seemed endless. The novelty did eventually wear off after a few years, but only after Nintendo had crushed it high definition competitors. 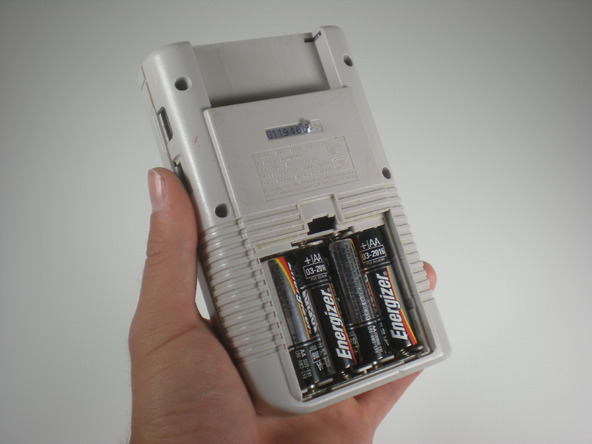 One aspect that differentiated the Game Boy from other portable systems of its time (Gear Game, Lynx) was the fact that you actually saw people playing it. Yeah, these things were all over the place in 1990. I even remember a girl brought one to work to play on her break. The main problem with the other systems (besides their unwieldy size) was how they chewed through batteries in just a few hours. The Game Boy on the other hand would run for 10-30 hours on a single set of batteries. The system's visibility no doubt added to its popularity, as it was basically free advertising for Nintendo. 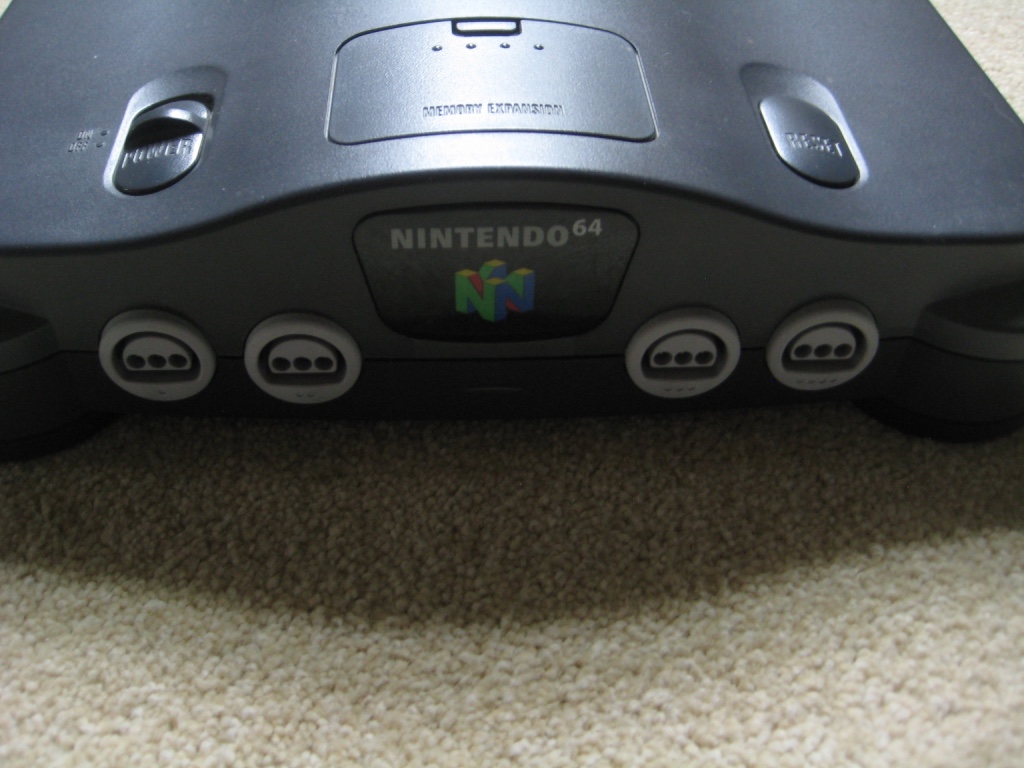 It may not seem like a big deal now but the Nintendo 64 shipping with four controller ports was a pretty major development. Prior to that you were required to purchase a clunky multi-player adapter to play with more than two players. Nintendo not only helped facilitate "couch gaming" but incentivized developers to make multiplayer games. Without those four ports, wildly popular titles like Mario Kart 64 (1997) and 007 Goldeneye (1997) would not have been the same. 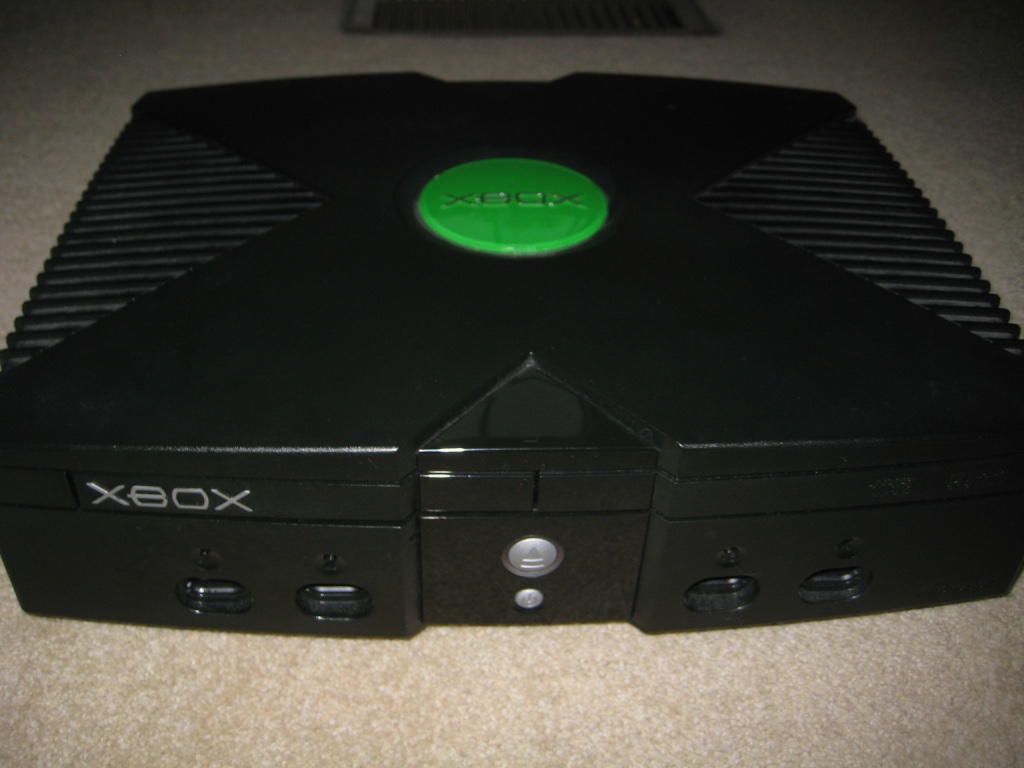 During the late 1990's games were getting longer and consoles needed a mechanism to record the player's progress. The Playstation offered slim little memory cards but they were limited in storage and expensive. The Saturn had internal storage augmented via a memory cartridge. The Nintendo 64 had clunky controller "paks". Then the Xbox came along and changed everything with its built-in 10GB hard drive. Suddenly not only was space no longer an issue, but saving could be done quickly and transparently. 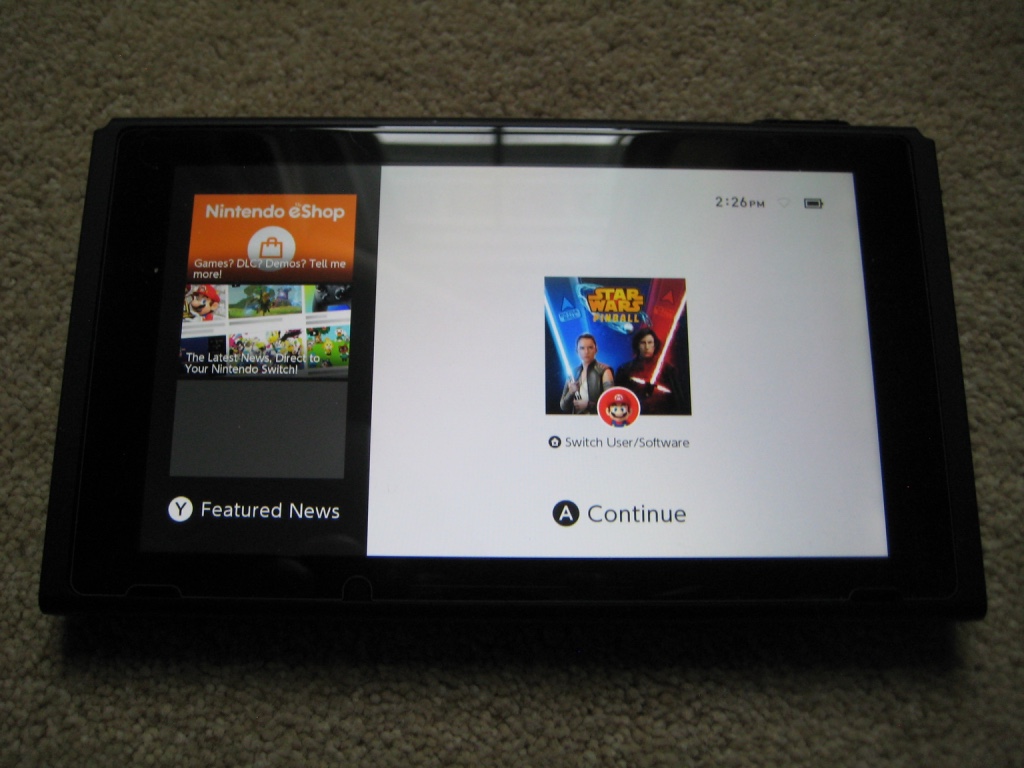 Nintendo had always juggled its portable system lineup separately from its consoles. With the Wii U however it tried to bridge the gap to some degree, making it possible to play a console game the control pad screen, freeing up the TV. The Switch was a natural evolution of that idea, offering a self-contained system you could play on a TV or take anywhere. One key was allowing the same controller to be used in either case. Another was the high-definition portable screen. Nintendo's ingenious move put Nintendo in position to corner both the console and portable markets at the same time. 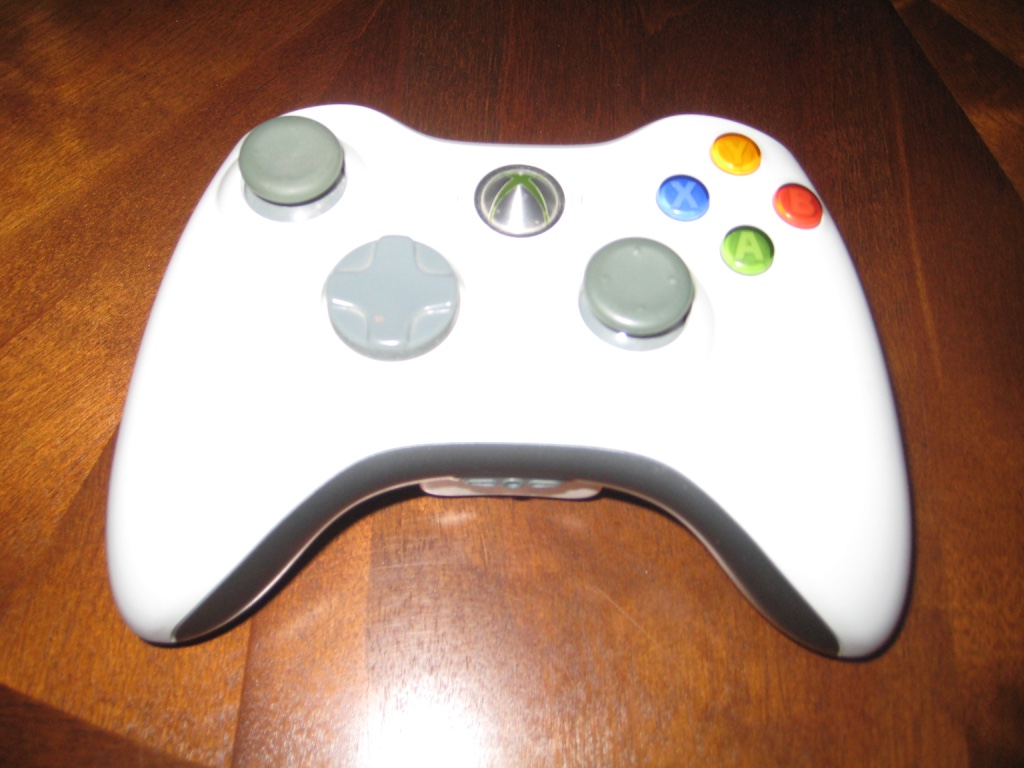 Sony and Nintendo introduced wireless controllers for their PS3 and Wii consoles but Microsoft beat them both to the market. I still consider the Xbox 360 controller one of the best ever made, with its sturdy construction, sensible button placement, and its bright white color. Even the little X button lights up. But the best part was the fact that it was wireless, powered by a pair of AA batteries. In my experience these batteries lasted a heck of a long time, and I prefer them to the rechargeable PS3 controllers. 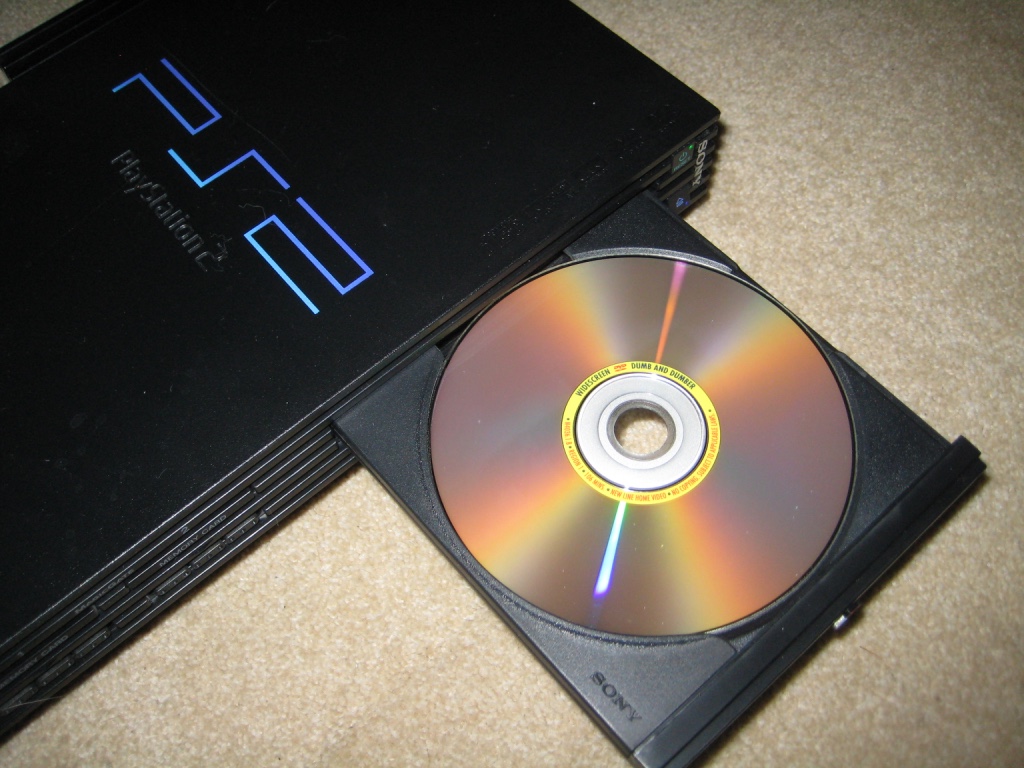 During the late 1990's the home video market was reaching its peak and DVDs were the "next big thing". Better picture quality. Clear sound. No degradation. Click to any chapter instantly. And most importantly of course no rewinding. Sony saw the writing on the wall and smartly integrated DVD capability right into their new console. As a result people were lining up to buy the PS2 for its DVD player alone. It may not have been the best player and the controller made for a clumsy remote, but it held most of us over until we could afford a dedicated player. 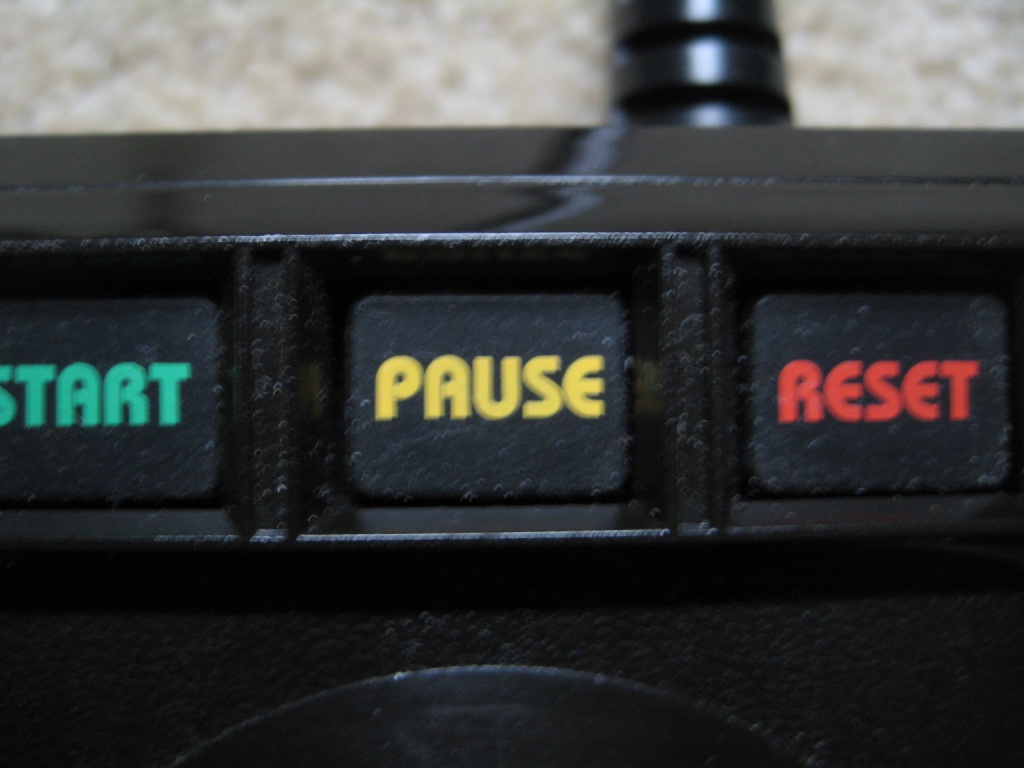 The other day I was reviewing an Atari 5200 game when the wife called me from downstairs. This is a common predicament for classic gamers who are often forced to choose between losing progress or pissing off a loved one. Then I looked down and remembered there was a handy little pause button right at my fingertips! Worked like a charm! I love this button. It's clearly labeled and singular in purpose, unlike modern controllers which recycle the "select" or "option" buttons. It also has a nice soft touch, as if you're gently letting the game know "hold on, I'll be right back". 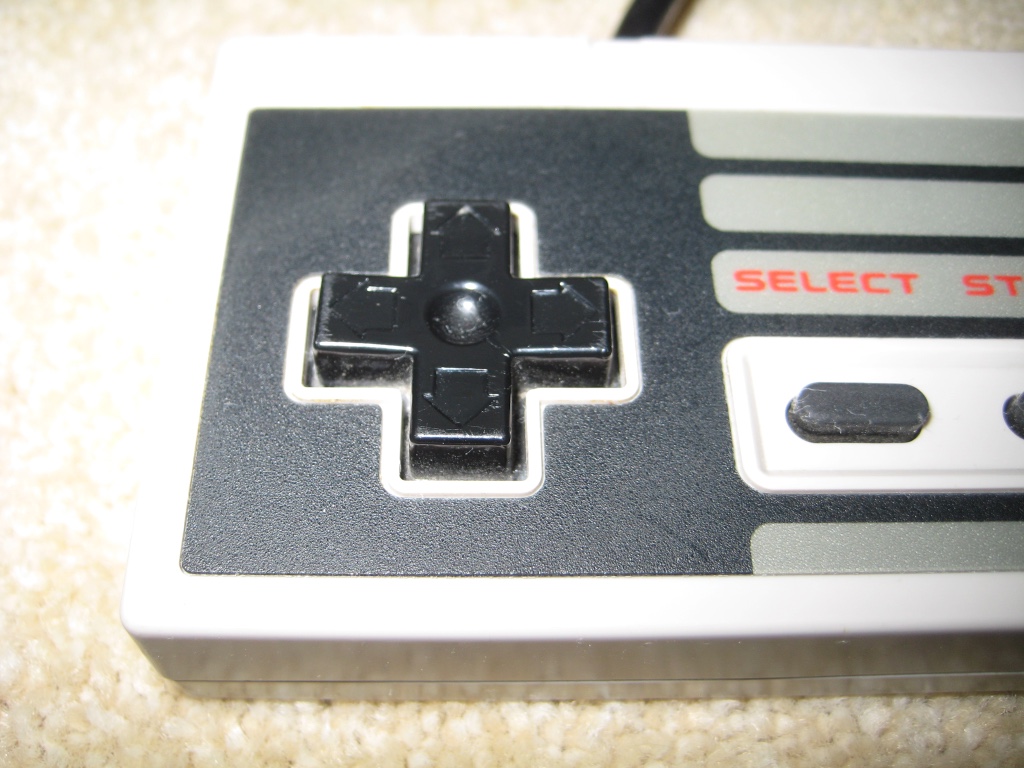 For the first generation of video games the joystick was the standard controller but in 1985 the original Nintendo (NES) changed everything. Its simple 8-way digital pad not only provided excellent control but was durable and comfortable enough to play for hours on end. You could argue Intellivision pioneered the concept with its "disc", but that lacked the comfort and precision of Nintendo's design, which has been incorporated into just about every controller since.