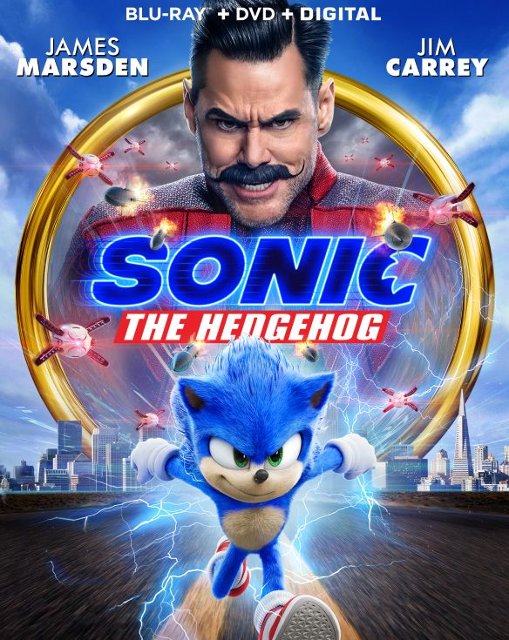 With sleazy networks like HBO attempting to normalize gratuitous sex, violence, and profanity in our viewing habits, a wholesome flick like Sonic the Hedgehog is refreshing. A non-Disney movie that can be enjoyed by the entire family is an anomaly of today's cinema.

This project got off to a very rocky start. The concept of an animated Sonic in a live action movie had disaster written all over it. Test audiences were horrified by Sonic's initial appearance. His body resembled a cheap costume and his toothy grin was the stuff of nightmares. To their credit, the filmmakers went back to the drawing board, reworked some stuff, and emerged a few months later with a surprisingly good film. I guess miracles really do happen.

Sonic the Hedgehog is a high-energy adventure set in the Pacific northwest. Our favorite blue hedgehog has taken up residence in Montana, but being from another world he feels obligated to remain hidden. His ability to dash at blinding speeds has allowed him to mingle with humans in the small town of Green Hills without being detected. After Sonic accidentally triggers a power outage the government steps in, employing the services of the brilliant Doctor Robotnik played by a revitalized Jim Carrey. While on the run from Robotnik's army of drones Sonic befriends a police officer who agrees to drive him to San Francisco to retrieve his lost gold rings. This sets up a very funny road trip sequence which is fertile ground for any comedy.

The writers deserve a lot of credit. Not only is this movie consistently funny but it's often laugh out loud funny! And aside from a few fart jokes it's remarkably clean and tasteful. The film pays homage to the hedgehog's game archive and there are countless pop culture references including several nods to Dumb and Dumber. And while Doctor Robotnik's character is completely over-the-top, a lot of the film's best moments are the more subtle throw-away lines. The tone is always upbeat and never mean spirited.

The casting people did a fantastic job. Just having Jim Carrey on board elevates the film to major motion picture status. And by letting him run wild, the director has delivered us the most entertaining Jim Carrey since the 90's. He clearly relishes his madcap role, incorporating physical comedy into every move and obnoxious snark into every line. James Marsden is equally great as the likeable police officer. His interaction with Sonic is surprisingly natural and his understated sense of humor balances out Carrey's wacky antics.

The fact that Sonic doesn't really stand out in his scenes tells me the animators did their job well. Sonic is routinely upstaged by the human actors but his hyperactivity gives the film energy. Unlike some video games that give him a cringe worthy kid voice, he talks like a normal young man. One aspect of the character I did not like was his ability to speed around unseen in "bullet time". This really gives him an invulnerable quality that drains any kind of excitement or suspense from the battle scenes.

The Blu Ray includes a number of extras including making-of featurettes, commentary, a music video, and deleted scenes. Although aimed at kids and Sonic fans, this movie has universal appeal. Even my wife enjoyed it. You're not going to believe this, but it actually sets the stage for a sequel. So if you're looking for some entertainment you won't be embarrassed to watch with other people, check out Sonic the Hedgehog. It's just good clean fun.