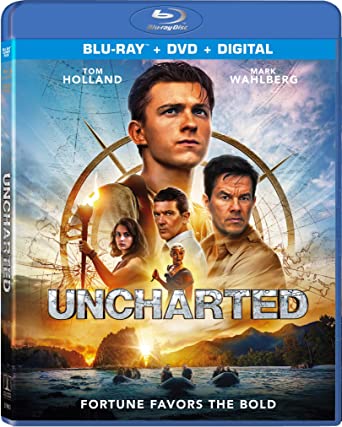 When people decide to make a movie based on a video game, it might be a good idea if those people actually played the game first. That clearly did not happen with Uncharted. If they did, they almost certainly would not have botched the casting as badly as this.

The main character in the game is a world-weary adventurer named Nathan Drake. He's 40-ish but very athletic with a penchant for sarcastic one-liners. Sully is his 50-something accomplis, always leading Nathan into trouble and it's rarely clear if his intentions are good.

It should have been easy to cast a motion picture like this, but the casting directors obviously thought they knew better than everyone else. Going against the grain they went with the spritely Tom Holland and the middle-aged Marky Mark Wahlberg for an awkward buddy-buddy combination. Perhaps they went young to ensure there could be plenty of sequels?

The overall quality of the film reminded me of the Mummy (1999). It's like a low-budget Indiana Jones with a lot of average-to-bad CGI effects. The plot doesn't make a lot of sense and it's pretty easy to name the other adventure films it rips off. The worst part is, this has very little to do with the Uncharted video games.

To their credit, the likable Holland and Wahlberg manage to carry the movie. The "bad guy" side of the aisle however was completely mishandled. Antonio Banderas still manages to convey some gravitas, but Tatiana Gabrielle is a thoroughly unconvincing villain. You can't tell me a bunch of big, badass henchmen are going to fall in line behind this 20-something fashion plate just because she has a knife.

Uncharted is not a good movie, but that doesn't mean it can't be enjoyed under the right circumstances. I think if you get out the popcorn, turn down the lights, and turn down your expectations even lower, you may find yourself mildly entertained. I wouldn't recommend pairing it with booze however, because you're almost guaranteed to fall asleep half way through. Grade: D.