This portable compilation offers a new slant on two arcade classics. I really can't get over the quality here. Defender retains all the frantic side-scrolling mayhem of the coin-op original. I love how you can rapidly fire streaming shots. Those large aliens are fun to pick off, and the explosions are satisfying.

Naturally however there are a few trade-offs. The radar displays a bunch of black boxes, and it's hard to tell the enemies from the humans you're trying to save. The buttons are for shooting and smart bombs, so there's no hyperspace. That can be a problem when mutants begin to swarm, as they seem impossible to outrun.

Still, I had a blast trying to edge out my top score. Joust is nearly as good. In this ostrich-flapping game you attempt to dismount flying gladiators while snatching up eggs for big points. Since the objects in this game are enlarged a bit there's less real-estate to work with. In addition, the frame rate becomes a bit erratic in advanced stages.

That said, the game is still fun and gives you plenty of lives to work with. One character who really steals the show is the lava troll - a flaming hand who reaches up from the fiery depths to grab those who fly too low. Though rarely seen in the arcade, the disembodied hand will chase you around! There are numerous customization options like difficulty level, rapid-fire, and number of lives.

Defender & Joust is exactly what you want in a portable - manic arcade fun on the go. And if you own a Super Game Boy (for the SNES) you're in for a real treat, with full-color cabinet art and even an "updated" version of Joust! © Copyright 2017 The Video Game Critic.

Baseball looks promising enough at first glance. The pitcher/batter screen offers a nice view from behind the plate with all the vital stats across the bottom. Pitching is simple and the batter can slide freely around the batter's box. But when the ball is put into play... oy!

It's bad enough the ball slowly floats through the air like a damn balloon, but the scrolling screen jerks around trying to keep up with it! It's truly hard to anticipate where the ball is going to land but fortunately your fielders will automatically camp out underneath fly balls. Throwing the ball back to the infield is painful because your throws are so weak. The ball is rolling by the time it reaches the base! Maybe I should just run the ball in next time!

I could never figure out how to control the baserunners. The CPU was beating me like a drum until I discovered I could regularly strike him out with fastballs down the middle. This is a shoddy product. Baseball for the Game Boy is so bad I could barely tolerate three innings of it. © Copyright 2020 The Video Game Critic.

If you're a Batman fan this simplistic platform-shooter is likely to induce eye-rolling. Our short, squat hero looks more like Bat-mite! He fires these big-ass cannonballs out of a gun. Couldn't they have made those look like batarangs instead? It may be a misuse of a license but the Batman game is still a good time.

Our miniature Caped Crusader can gracefully leap great distances and his duck move is invaluable when exchanging gunfire with the Joker's goons. The stage layouts are clever, allowing you to strategically clear away blocks to reveal bonuses and power-ups. A few are tricky to reach, and once the screen moves forward, you can't go back.

The only connections to the film lie in the cutscenes and stage locations which include a chemical factory, museum, and cathedral. There's also a rapid-fire Batwing stage. The music isn't from the film but it's pretty great with some nifty drumwork. Batman could be more faithful to the film but somehow succeeds in spite of itself. © Copyright 2020 The Video Game Critic.

The Batman Forever name is one of infamy for retro-gamers but this portable edition is halfway respectable. Batman looks quite realistic on the small screen, swaying in place and waving his fists. His roundhouse kicks and leg sweeps look pretty nifty with blows so impactful they shake the entire screen! The scenery and musical score tend to be sparse and repetitive.

As Batman forges through the opening stage he smashes statues and vases for power-ups. Thugs show up with names like "Bully", "Catnip" and "Ninja". Has it occurred to Batman that maybe these guys are just mad because he's breaking all their stuff? The fighting adopts the Mortal Kombat formula but since enemy life meters are short they don't overstay their welcome. The collision detection is pretty loose and I'm not sure any of my rapid-fire punches actually connected.

At the end of the first area I found myself hopelessly stuck in front of a closed exit door. A little research revealed I was required to quickly press down and up to spring upward through the ceiling to a higher level. How in the [expletive] was I supposed to know that? There are also special moves that require "dragon-punch" style pad maneuvers.

Upon freeing a few prisoners the exit magically opened, which makes no sense. After exhausting my lives a score was displayed but there were no continues. No complaints here! Batman Forever won't win any awards but compared to the 16-bit debacles it's a total blast. © Copyright 2020 The Video Game Critic.

Return of the Joker is a marginal side-scroller where you vault, swing, and punch bad guys while attempting to reach the end of each perilous stage. Batman looks buff and can punch rapidly, but why in the hell is he fighting baseball players from the 1920's? I think I just knocked out Babe Ruth for Pete's sake. Oh look - the Babe left a heart for me!

The ability to vault between walls gives the game a Ninja Gaiden (NES, 1989) flavor but the controls are clumsy. One false move and you fall off the screen or get crushed by heavy machinery, and then it's game over. There's no score or password although a few continues are available if you're a glutton for punishment.

Normally I appreciate a stage select feature but the options here (train, factory, sewers) could be more enticing. I subjected a few friends to Return of the Joker and they all ended up with the same glazed-over look in their eyes. There comes a time when you just need to throw up your hands and admit a game is junk. © Copyright 2020 The Video Game Critic. 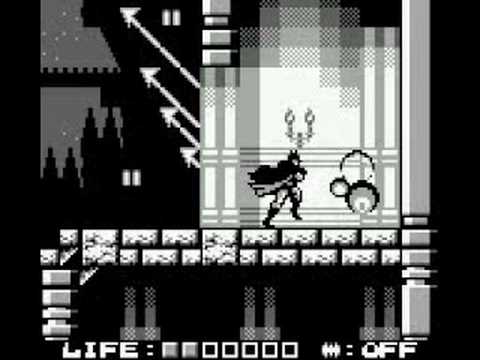 Batman: The Animated Series kicks off with a stylish animated intro. That might not seem like a big deal, but for a proper Batman title setting a brooding atmosphere is key. The graphics are outstanding. When played on the Game Boy Advance subtle red and green accents beautifully enhance the artistic graphics.

Batman really does look like the Caped Crusader - not some cartoon version. I love the skyscrapers looming in the moonlit sky and the dramatic musical score. Batman can jump, punch, and vault off walls like Ninja Gaiden (NES, 1989). I have to admit the wall-jumping takes some getting used to. Batman can also fire his grappling hook straight up to pull himself up to higher levels. While prowling around for items it's fun to get the drop on bad guys.

The combat however is a little shallow. Batman's attacks are limited to simple punches and batarangs (when available). The stages are well-designed and the bosses are reasonable in difficulty. The game lacks a password but it does have a score and continues. Batman: The Animated Series far exceeded my expectations. Pound for pound this is one of the best Batman titles I've played on a portable. © Copyright 2019 The Video Game Critic.

Battletoads (NES, 1991) was a wildly popular side-scrolling beat-em-up starring a group of amphibians schooled in the martial arts. In this portable edition you automatically lose the two-player coop that made the original such a hoot. The graphics aren't bad though, and if you're playing on a Game Boy Player the visuals are enhanced with attractive blue and lime accents.

The opening stage is fairly routine as you move to the right, methodically beating the crap out of pig-like creatures. Your toad exudes raw machismo as he charges with his shoulder or knocks enemies off the screen with an exaggerated punch. Swinging an axe exudes thunderous force, causing the whole screen to shake! The first boss looks intimidating but I was surprised how easy he is to hoist over my head and toss.

After that your toad hops into a little jet for some side-scrolling shooting action. Blasting incoming missiles is fun for about 10 seconds, but there's not much to it. You're then required to fly around walls of spikes with small openings. The margin for error is so tiny you practically have to memorize the hole locations. I'm not sure how I got through this part, but I felt like I was playing on pure instinct. This sequence alone makes me never want to play the game again.

The third stage reprises the winning beat-down formula, but this time you're pounding rats into the ground while leaping between precarious ledges. You get three continues, but like the NES game, finishing this is a monumental challenge. The portable Battletoads has all the difficulty of the NES game, but only a hint of its charm. © Copyright 2017 The Video Game Critic.

Caution: May contain rabbits
At first glance Bugs Bunny Crazy Castle 2 appears to be a dull, by-the-numbers platformer. You collect keys, open doors, evade enemies, reach the exit, and proceed to the next stage. Once the difficulty starts to ramp however you realize there's quite a bit of strategy here.

You can't jump, but the levels are connected by ladders, staircases, trampolines, pipes, and portals. Occasionally you'll find a weapon like a bow or bomb that can send enemies up in smoke. These are limited in quantity however, so evasion should be your first option.

Adversaries include familiar Warner Bros. characters like Yosemite Sam, Wile E. Coyote, Sylvester, Foghorn Leghorn, and the Tasmanian devil. Don't give up when you appear to be trapped or cornered. You can pass foes on the stairs, and sometimes they'll inexplicably turn around at the last second. The stages are short and a four-letter password is provided between them.

The music is surprisingly good, although its repetitive nature will get on your nerves after a while. What makes Crazy Castle 2 work is its thoughtfully constructed stages. There's usually a specific route you need to follow and the margin for error is thin. Once you get into a groove, Bugs Bunny's Crazy Castle 2 is actually somewhat addictive. © Copyright 2014 The Video Game Critic.