May contain monkeys
I can't recall the last time I felt so miserable playing a platform game! Lion King was frustrating enough on the SNES, but at least that one had some eye candy to ease the pain. The only thing this portable version has going for it is that cute animation of little Simba scrambling to pull himself up on a ledge. Even as a little cub Simba can use his roar to incapacitate enemies and flip porcupines. The platforms in the opening stage are arranged vertically - just one of many poor design choices.

The controls flat-out suck. Simba's ability to grab a ledge should ease the difficulty, but most of the time he just falls right through! It's especially demoralizing when you fall several stories and have to work your way back up. The abysmal collision detection works when it shouldn't, and doesn't work when it should! Simba bumps his head on platforms which severely constrains your movement. Worse yet, you tend to get stuck in tight spots with annoying creatures that sap your life.

In stage two you leap between giraffe heads sticking out of water, and the margin of error is ridiculously small. The overhead stampede stage would be a nice change of pace if only it were the least bit fun. When Simba grows up he changes form, but is no larger on the screen. The Lion King is pure torture, and if not for the stage skip feature (pause, B, A, A, B, A, A), I wouldn't have made it very far. The harmonized music has a melancholy quality, and that's fitting because Lion King made me sad. Circle of Life? More like Circle of Shame! © Copyright 2014 The Video Game Critic.

Based on a film
Wait - this is supposed to be a Jurassic Park game? This clumsy platformer plays more like a bad Flashback (Genesis, 1993) sequel. Your fluidly-animated character can run and leap like a track star but is hard to control with any precision. He tends to slide all over the place. In the opening stage you sprint over hills and through caves to collect ten compy eggs.

Your adversaries include both dinosaurs and human hunters. Large dinosaurs stomp you and small ones latch onto you, so they are equally annoying. The bad guys are super lame. You just run up to one (after taking several bullets), punch him in the face a few times, and grab the health icon that appears. Rinse and repeat!

The second stage takes place in a forest where you retrieve pterodactyl eggs. At first it's alarming to get carried off by a pterodactyl, but they often carry you to where you need to go! The control scheme is awkward. The select button cycles between your weapons and hands, but you need your hands to open the crates so you're constantly having to switch. When fighting, your guy performs a series of uppercuts and sweep kicks like he's in Mortal Kombat (Genesis, 1993). Enemies have an annoying tendency to overlap you so you can't touch them.

The lab stage is the worst; it's just an expansive maze with elevators. Everything looks the same. I did find it interesting how your objective is to collect floppy discs! The remaining stages are blatant rehashes of the first three. The spastic "music" that plays throughout the game is just plain irritating. Good video games require skill, reflexes, and cunning, but The Lost World is just a matter of perseverance and pain. © Copyright 2019 The Video Game Critic.

Malibu Volleyball plays about as well as it looks, and it looks pretty crappy! A two-on-two women's match resembles a bunch of cave women playing in the sand. The ball movement is smooth but floaty. When in the air an X appears where it's going to land. A lot of times I swore I was positioned right on that damn thing yet couldn't hit the ball. The animation is lousy. Why is my player performing a handstand? Oh wait, she's supposed to be diving backwards.

You can get good height at the net, but the spikes are awfully soft. Every now and then the game cuts over to a pretty referee wearing a bikini and shades. Talk about a sight for sore eyes! I found it interesting how players from different countries have unique body shapes and skin tones. Playing as men is a little faster, but Malibu Beach Volleyball fails to capture the energy and spirit of the sport. © Copyright 2020 The Video Game Critic.

An old arcade favorite, Marble Madness challenges you to guide a large white marble over three-dimensional platforms before time runs out. Using finesse and momentum you'll precariously navigate narrow strips while avoiding pesky obstacles like vacuums and slinkies. You view the action from a tilted overhead angle, and the Game Boy does an adequate job of rendering the features of each angular stage. Yes, it can be hard to make out some ridges and drop-offs, but after you play a stage once or twice you learn the "lay of the land".

The digital pad is kind of a clumsy way to control your marble, especially when you need to move diagonally. Still, this game has a way of keeping you coming back. When you die the game immediately places you back where you left off. Each time you play, you progress a little further, and some stages have alternate paths that add a risk/reward element. The looping, vertigo-like music is both catchy and appropriate. I've played better versions of Marble Madness, but never one this small. © Copyright 2014 The Video Game Critic. 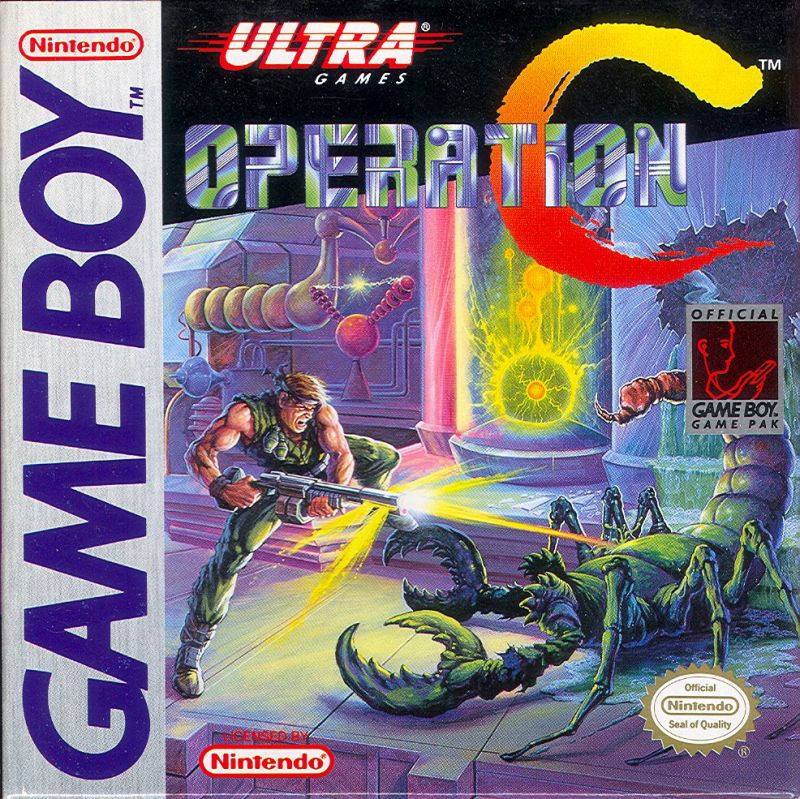 The first time I played Operation C, I was not prepared for such high-intensity shooting action. Suffice to say I was blown away. Who knew the original Game Boy was capable of such destructive mayhem? With smooth animation, tight control, and dozens of projectiles criss-crossing the screen, this portable Contra game is anything but watered down. You even get a faithful rendition of the spirited theme song.

The opening stage takes a page from Super C (NES, 1990) as you run up ramps, blast dudes in towers, and lie on your stomach to duck under cannon shots. Power-ups come early and often including three-way shots, homing missiles, and giant exploding shots. I love the way homing missiles buzz around the screen searching for their next victims like a swarm of killer bees. Even your default machine gun doles out the punishment with extreme prejudice. The ability to hold in the fire button to unleash rapid-fire is awesome.

If the game has a fault, it's with the platform jumping. For a guy who can somersault so high in the air, it's odd he can only jump forward a short distance. Even narrow openings should not be taken lightly, as you really need to wait until the last possible instant to time your leap. The margin of error is so small in fact that you can psych yourself out, slipping off the ledge before you even intiate your jump.

The industrial scenery is extremely well-rendered, with subtle shading used to convey structures in the distance. Like other Contra games the stages alternate between side-scrolling and overhead modes. I prefer the side angle but the overhead does add variety. When it comes to portable shooting action, it would be hard to find more bang for the buck than Operation C. I could play this one all day. © Copyright 2021 The Video Game Critic.

Star Wars: The Empire Strikes Back features well-proportioned characters, digitized images, and a rousing rendition of the Star Wars theme. You begin your journey as Luke riding a tauntaun on the ice planet of Hoth. It's cool how you can freely dismount to wander through icy caves below the surface. When a character communicates with you, the screen displays their digitized face above the dialog (with cantina music playing, oddly enough). "Luke, the lightsaber is the weapon of a Jedi". Thanks Ben, but I think we covered that in the first movie!

Luke fires shots rapidly and can perform a useful "super jump" by holding down first. After blasting probe droids and wumpas, Luke eventually locates his lightsaber. The graphics are detailed but the animation is painfully slow and choppy. Luke actually falls slower than he runs. The music is well orchestrated but hearing that Star Wars theme looping over and over again will give you a Bantha-sized headache. Navigating the ice caves is a nightmare.

The stages are full of regenerating enemies and the first boss took about 100 swats of my lightsaber to kill. When I died I had to restart the game from the very beginning! Even using the force is a pain in the ass. Not only is it necessary to stock up on "force energy", but you need to collect "ability" icons to do anything. The game has no score and no password feature. I never even reached the AT-AT battle (*sad face*). Capcom didn't put much effort into Empire Strikes Back and neither should you. © Copyright 2015 The Video Game Critic.

The Game Boy system was catapulted to greatness by Tetris (Nintendo, 1989) but I prefer Super Mario Land. This may be the best portable platformer I've ever played! It has all the core ingredients yet also has a quirky, boldly original way about it. The first few stages are set in ancient Egypt with pyramids, palm trees, tombs, and hieroglyphics. The scenery is quite exquisite despite being rendered with black outlines.

All the basic Mario ingredients are here: bump blocks, pounce enemies, hop on floating platforms, and travel through pipes to underground bonus stages. But the game is loaded with clever puzzles, weird surprises, and even side-scrolling shooting stages. Whenever Mario appears to rescue Daisy, she turns into a monster and runs away! Turtles explode when you flip them over, so don't dawdle! New enemies include sphinxes, flying bugs that drop spears, and even zombies! I like how that high-bouncing ball weapon can take out enemies both high and low, as well as snag coins out of reach.

You can go through lives in a hurry in this game, but rest assured there are ample bonus lives and frequent checkpoints. Even the music is first rate. The controls felt a bit laggy on my GameCube Game Boy Player, but perfectly good on my Game Boy SP. There are no passwords but you can earn continues. Super Mario Land is so good it gives the console Super Mario games a run for the money. If you were expecting a watered-down platformer, think again friend! I'll take the Pepsi Challenge against Super Mario Bros. (NES, 1985) any day of the week. © Copyright 2019 The Video Game Critic.